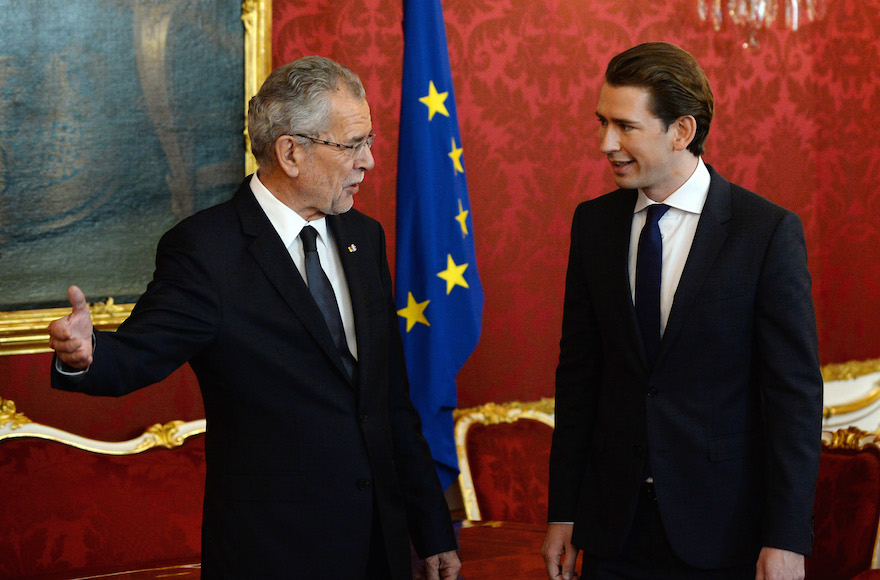 VIENNA (JTA) — Austria’s far-right Freedom Party will “probably be a part of the coalition” despite pleas by Jews to keep it out, the president of the Jewish Community of Vienna said.

Oskar Deutsch made the prediction last week in the aftermath of Oct. 15 elections that saw the Freedom Party finish third behind the center-right People’s Party, headed by the 31-year-old Sebastian Kurz, and the Social Democrats.

“I am the president of a very small community,” said Deutsch, who called for the Freedom Party to be excluded from the government before and after the elections — about Austria’s approximately 7,000 Jews. “I don’t think that the state of Austria will listen – or maybe they’ll listen but my influence is not so big.”

The Jewish Community of Austria has said that the Freedom Party, which was founded in the 1950s by a former Nazi SS officer, is tainted by fascist tendencies and rhetoric, and that the anti-Islam party’s public rejection of anti-Semitism is lip service.

Kurz has declined to preclude any specific coalition partners, saying he would not join forces with a party that supports anti-Semitic or hateful rhetoric — a definition that may or may not apply to the Freedom Party, as its spokespeople and leader deny that their party incites hate or anti-Semitism.

Both Deutsch, whose community boycotts the Freedom Party, and Rabbi Pinchas Goldschmidt, the president of the European Conference of Rabbis, called on Israel to also shun the Freedom Party and its officials regardless of whether they enter government.

“Israel should search allies that share its basic values,” said Goldschmidt, whose organization canceled a 2000 meeting of its executive board in Vienna to protest the Freedom Party’s inclusion that year for the first time in Austria’s governing coalition.

Whereas Goldschmidt’s organization and other international Jewish groups may resume protest against Austria if the Freedom Party joins its government, he said working with officials tied to that party may be unavoidable for the local Jewish community.

“Any Jewish community has to work with its government,” said Goldschmidt, who last week presented at the European Parliament a book he wrote about rising extremism, among other subjects.