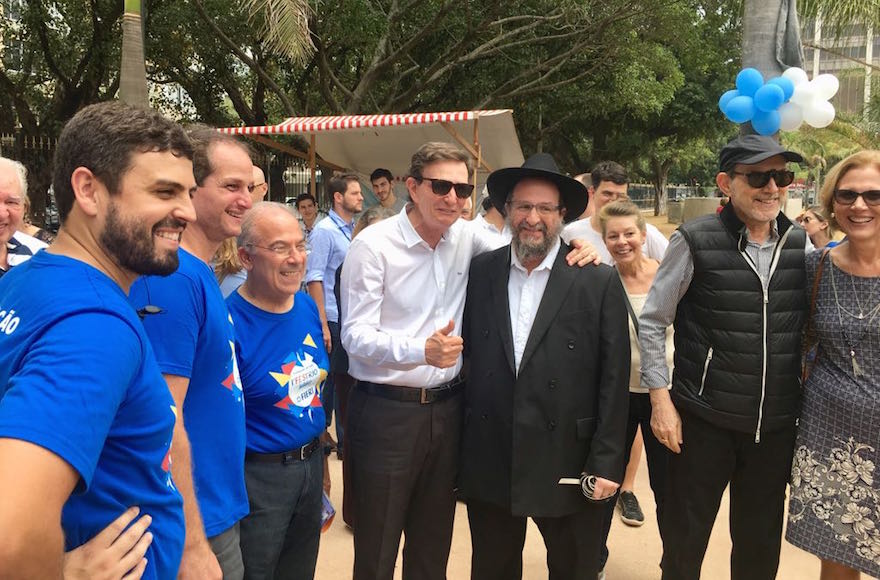 (JTA) — The mayor of Rio de Janeiro joined some 9,000 Jews and non-Jews at the debut of a Jewish street festival in the city.

The Fest Rio Judaico was held Sunday at a city square in the heart of Ipanema, one of Rio’s most upscale neighborhoods and home to hundreds of Jewish families. The daylong event, which drew massive media coverage, featured Jewish culture and traditions, including music, dance, cinema, literature, science, food and more.

“Respect for all religions is fundamental in a city that is already experiencing anomalous violence. And we do not need any kind of religious phobia,” said Mayor Marcelo Crivella, an openly pro-Israel evangelical Christian. “The fact that there are so many people here who are not from the Jewish community is a demonstration of the tolerance that must exist between all religions.”

He added: “The Hebrew culture moves me. It has a special meaning. It is a millenial people who have seen the greatest atrocities, persecutions and resurgence as an extraordinary nation in culture, science, defense, and also democracy. Being here today is a way to celebrate all this.”

According to organizers, it was the largest outdoors Jewish gathering ever held in Brazil’s second largest city, which is home to some 30,000 Jews. Previous large Jewish events in Rio were held indoors for security reasons.

“Bringing Judaism to the public square is fundamental in combating anti-Semitism,” Osias Wurman, Israel’s honorary consul in Rio and a former president of the Rio Jewish federation, told JTA. “Those who know us respect us; those who do not know us are more susceptible to prejudice.”

In July, Crivella laid the cornerstone of a long-awaited Holocaust memorial in Rio. Two months earlier he spoke up for Israel before some 2,000 people during a celebration of Israel’s Independence Day held at a Jewish sports club.