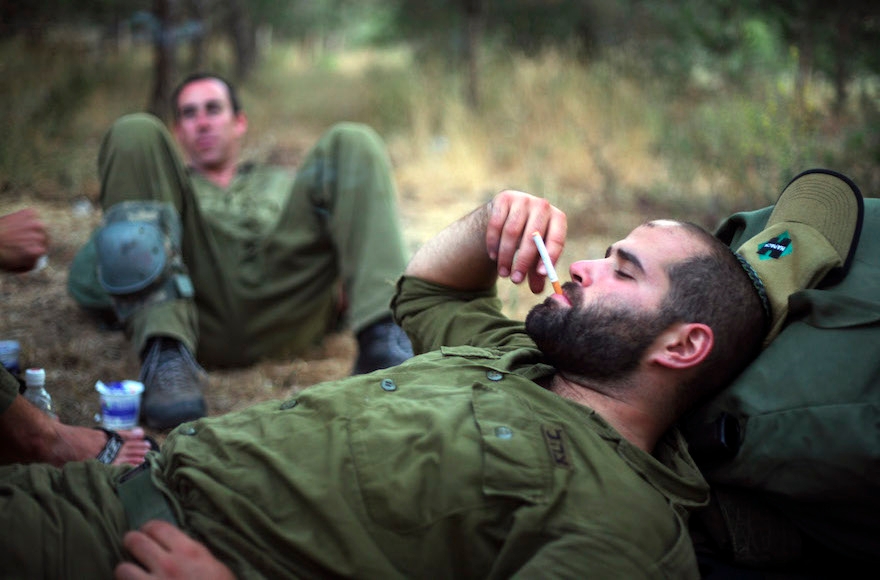 JERUSALEM (JTA) – The Israel Defense Forces takes pride in its status as a “people’s army.”

More than just a military, the IDF embraces its reputation as an equalizing force in Israeli society. Every soldier, rich or poor, is supposed to learn during mandatory army service what it takes to be a successful citizen.

“Israel is a country known as ‘a nation of immigrants,'” the army wrote on its blog several years ago. “The leading assumption is that by integration into the IDF, assimilation into Israeli society is easier.”

But Israel’s Channel 2 challenged that ideal with a TV news story aired Friday about what it said is a growing phenomenon of soldiers from privileged backgrounds selling their guard duty to their hard-up comrades. The report prompted debate among Israelis over how much the army can be expected to do for its soldiers.

Among developed countries, Israel has the highest poverty rate and the second worst income inequality behind only the United States. Although Israel’s poorest communities, haredi Jews and Arabs, generally do not serve, those disparities are still reflected in the army, into which most Jews are conscripted after high school.

In the Channel 2 story, three Israeli soldiers revealed that they perform guard duty for their fellow soldiers in exchange for money. With their names and faces concealed, they discussed working extra nights, weekends and holidays to support themselves and their financially struggling families. Their commanders look the other way, they said, allowing them in some cases to earn more in a single shift than the army pays them per month.

“Gimmel,” a combat soldier on a base in southern Israel, said he began accepting payment for extra guard duty after his commander turned down his request to work during his time off the base. The work allows him to send money home, he said, but bearing the burden of others is demeaning.

“What is most painful is that once again class differences enter the army, the place that must be be neutral and equal regarding class differences,” he said. “Rich people go home. People with low status stay and guard in their place.”

Gimmel also said the long hours compromise his effectiveness as a soldier.

“You sleep an hour, maybe. You’re totally broken,” he said. “Everything you do, you don’t do correctly. You make mistakes.”

While Gimmel conceded that buying and selling guard duty is “not OK” and should be stopped, he put the responsibility on the army for not doing enough to take care of its soldiers.

In a written response to Channel 2, the IDF Spokesperson’s Unit said that guard duty is a “military activity” and buying and selling it is “strictly forbidden.” The army does not “recognize” a widespread problem, the statement said; soldiers from low-income backgrounds should take advantage of available resources.

Yet the practice of buying and selling guard duty has been reported in Israel before, and in a Facebook discussion under the Channel 2 story, dozens of former soldiers said it was common during their army service, with accounts stretching back as far as the 1970s.

One of the commenters, Aviv, who asked that his last name not be used, told JTA he considered picking up extra guard duty at times during his decade in the Israeli Air Force. But he said he had enough support from his parents that it was not necessary. Like many commenters, Aviv expressed mixed feelings about the practice.

“Look, it definitely reduces the headache for the system. The soldiers who need money can do a favor for a friend and earn half their monthly salary in a few hours,” he said. “On the other hand, it’s pretty messed up because these soldiers should get the help from the system itself.”

Maayan Adam, a spokeswoman for Culture Minister Miri Regev and a star of the latest season of Israel’s version of the “Survivor” reality TV show, spoke out in favor of allowing soldiers to buy and sell guard duty. In a Facebook post Friday, she recalled working double shifts as a waitress to support herself in the army. If her follow soldiers had offered her money to guard for them, she said, “I wouldn’t have thought twice.”

“True, this phenomenon is painful,” Adam wrote. “But I must admit that the soldier in me very much hopes this option will not be taken from the soldiers. Even if it sounds awful to you, it’s a ray of light for them.”

Adam said she did not have faith that the army could deal with the problem, saying it “does not always have solutions for complex cases, usually poor solutions.”

A former army social work officer, who spoke to JTA on condition of anonymity, agreed. During her service, she said, she was often frustrated with how poorly the bureaucracy served her neediest soldiers and their families. But she still expressed conviction that the army could not abandon its role as a national unifier. She said it must both stop soldiers from buying and selling guard duty and make sure they do not have not.

“When you’re wearing the uniform, you really can’t tell whether the person next to you is rich or poor,” she said. “It would be heartbreaking to see that lost.”