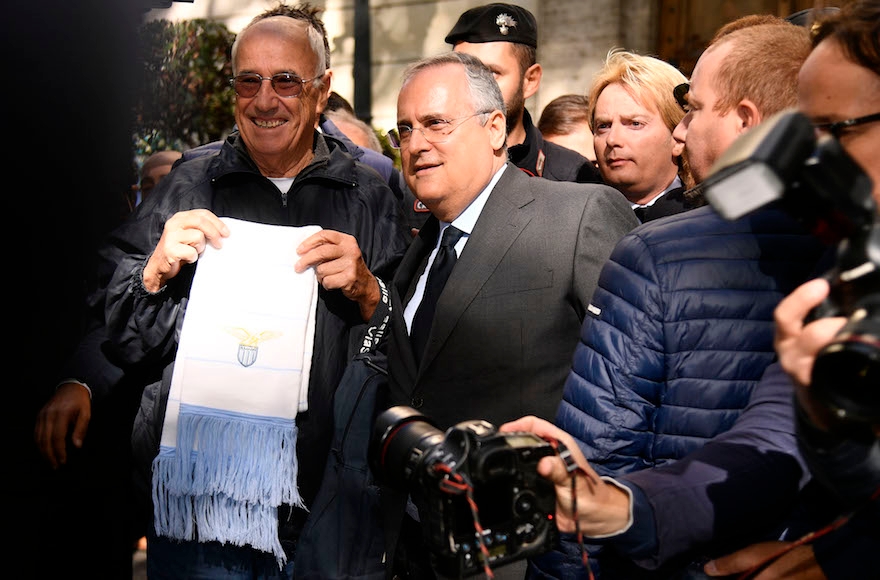 (JTA) – A passage from “The Diary of Anne Frank” will be read before the start of all soccer matches in Italy after fans of one Rome team plastered a stadium with stickers showing the teenage Holocaust diarist wearing the uniform of a rival city club.

The decision to hold a moment of silence and read from the diary at professional, amateur and youth matches was announced Tuesday by Italy’s sports minister, Luca Lotti, and will be carried out by The Italian Soccer Federation.

On Sunday, fans of the Lazio club posted the stickers around Rome’s Olympic Stadium showing Anne Frank wearing the shirt of the Roma team. The teams share the stadium. Roma is often associated with being left wing and Jewish.

Italian police have opened an investigation into the incident. The soccer federation also is set to open an investigation, which could lead to a punishment for the Lazio team, such as a fine or playing in an empty stadium.

Lazio President Claudio Lotito said Tuesday that in response to the incident, his club will take 200 fans every year to visit Auschwitz. Also, players will visit schools to speak to students about respecting rules and stamping out racism and social barriers.

Prior to the decisions being announced, Lotito laid a wreath in front of Rome’s main synagogue in memory of Holocaust victims and condemned the actions of the fans.

This is the diary passage to be read before the matches, according to the soccer federation:

“I see the world being slowly transformed into a wilderness, I hear the approaching thunder that, one day, will destroy us too, I feel the suffering of millions. And yet, when I look up at the sky, I somehow feel that everything will change for the better, that this cruelty too shall end, that peace and tranquility will return once more.”

Italian President Sergio Mattarello called the posting of the stickers an “inhuman” and “alarming” act.

The president of Rome’s Jewish community, Ruth Dureghello said in a statement published in the Italian Jewish media that the Rome Jewish community noted “with satisfaction the response of institutions and of civil society to anti-Semitic manifestations that occurred at the Olympic Stadium in Rome.”

Lazio and Roma are scheduled to meet on Nov. 18.