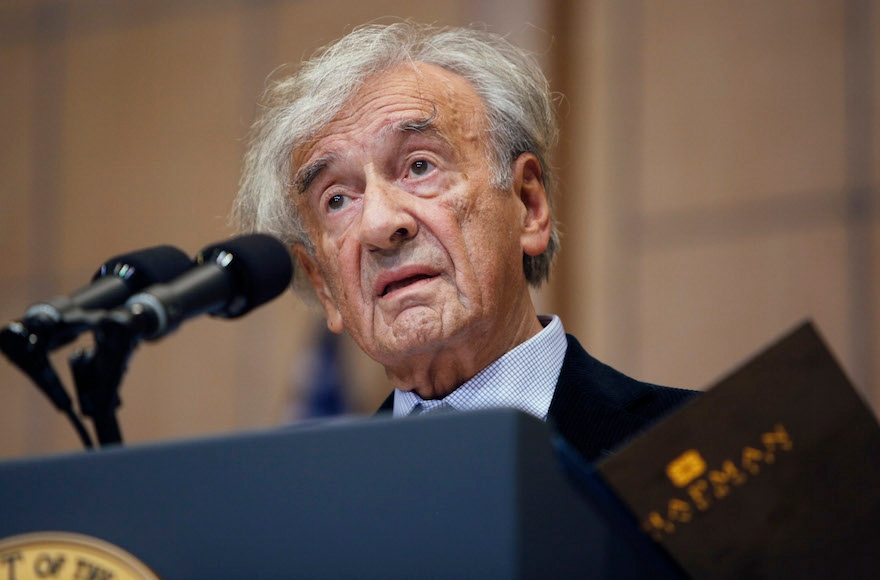 (JTA) — A woman has accused Elie Wiesel of molesting her three decades ago at a charity event.

Jenny Listman, who published the account Oct. 19 on Medium, says Wiesel grabbed her behind as they posed for a group photo with her then-boyfriend’s family at a Jewish charity event in New York in 1989. She was a 19-year-old student at the University of Pennsylvania at the time, and Wiesel spoke at the event.

“The hand moved lower. It moved again,” Listman wrote, narrating her experience as the photo was being taken, and writing later, “The photographer snapped the photo. Simultaneously, Elie Wiesel’s right hand had reached my right ass cheek, which he squeezed.”

David Listman, Listman’s boyfriend at the time and ex-husband, did not see the assault but confirmed to JTA that Listman told him of it at the time. JTA’s attempts to contact Listman were unsuccessful.

Wiesel, who died last year at 87, rose to prominence for writing and speaking about his experience as a Holocaust survivor and the need for people to confront evil. He won the Nobel Peace Prize in 1986 for his activism.

The charity he founded, the Elie Wiesel Foundation for Humanity, rejected Listman’s allegations.

“We utterly reject this spurious accusation,” the foundation said in a statement to Newsweek. “Elie Wiesel had a decades-long role as a respected teacher and mentor to countless students. At no time during his long career has anything like this ever been suggested.”

Listman, now a geneticist, wrote that the experience was part of a string of sexual harassment and assault incidents she experienced that made her depressed and suicidal. She didn’t speak out about the Wiesel incident for nearly three decades, she wrote, because it “might hurt many people who would lose their idol” and because she feared it would reverberate negatively on the Jewish community.

But in the wake of the accusations of sexual abuse against Harvey Weinstein, and the subsequent “#metoo” campaign by victims of assault, she decided to publish the experience.

“I am not to blame for robbing the Jewish community of a leader, the world of a symbol, or his family of their memories,” she wrote. “I did not do it. He did. He is the only one responsible for his evil act.”