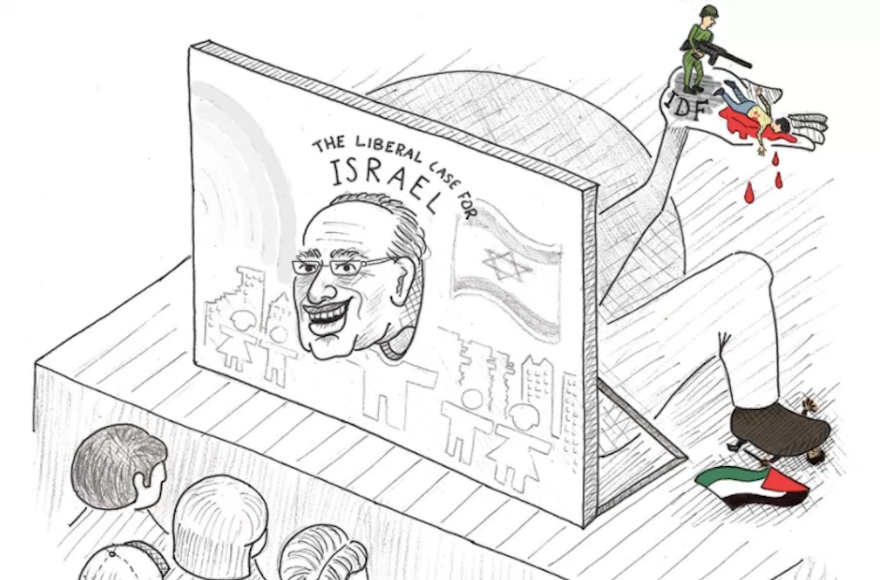 (JTA) — The chancellor of the University of California, Berkeley, condemned a student newspaper for  publishing an editorial cartoon that used what she called “anti-Semitic imagery” to criticize Alan Dershowitz’s pro-Israel stance.

The cartoon published a week ago in the Daily Californian depicts a grinning Dershowitz with his head poking through a cardboard cutout bearing an Israeli flag and the silhouettes of happy children. The sign reads “The Liberal Case for Israel,” which was the topic of the Harvard Law School professor’s recent speech on the campus.

Behind the sign, Dershowitz is stepping on a man with a Palestinian flag and holding up an Israeli soldier shooting an unarmed man soaking in a puddle of blood. In the online version, only the Palestinian flag, the soldier and the blood are in color.

In a letter to the editor published Tuesday in The Daily Californian, Chancellor Carol Christ called the cartoon “offensive, appalling and deeply disappointing.”

“I condemn its publication,” she wrote. “Are you aware that its anti-Semitic imagery connects directly to the centuries-old ‘blood libel’ that falsely accused Jews of engaging in ritual murder? I cannot recall anything similar in The Daily Californian, and I call on the paper’s editors to reflect on whether they would sanction a similar assault on other ethnic or religious groups.

“We cannot build a campus community where everyone feels safe, respected and welcome if hatred and the perpetuation of harmful stereotypes become an acceptable part of our discourse,” the letter concluded.

In an interview Monday with The Daily Wire, a conservative website, Dershowitz said he was surprised that there was “little response” to the offensive cartoon.

“Imagine if a comparably anti-black or anti-woman or anti-gay cartoon was ever published in the Berkeley student newspaper. Again, it reflects for me the incredible double standard in tolerance that people have toward anti-Semitism,” he said.

Dershowitz noted that the newspaper is an official publication of the state university, but also said he defended the student editors’ right to publish it.

The executive director of the Berkeley Hillel, Rabbi Adam Naftalin-Kelman, also scored the paper for printing the cartoon.

“There should be no excuse or rationalization for why this cartoon is ‘simply’ a critique of Israeli policy or the speaker’s opinion,” the rabbi wrote in a letter to the editor in the Daily Californian. “Like any bigoted cartoon, it should be called out, and the leadership of The Daily Californian needs to take responsibility for its actions.”

Hours after Dershowitz spoke at UC Berkeley on Oct. 11, a flier of the event was discovered with a swastika drawn over his face. The speech had originally been blocked by the university because organizers of his visit did not give campus police the required eight-week notice for the event — a requirement that only applies to nondepartmental applicants. Following that disclosure, the law school agreed to co-sponsor the talk.