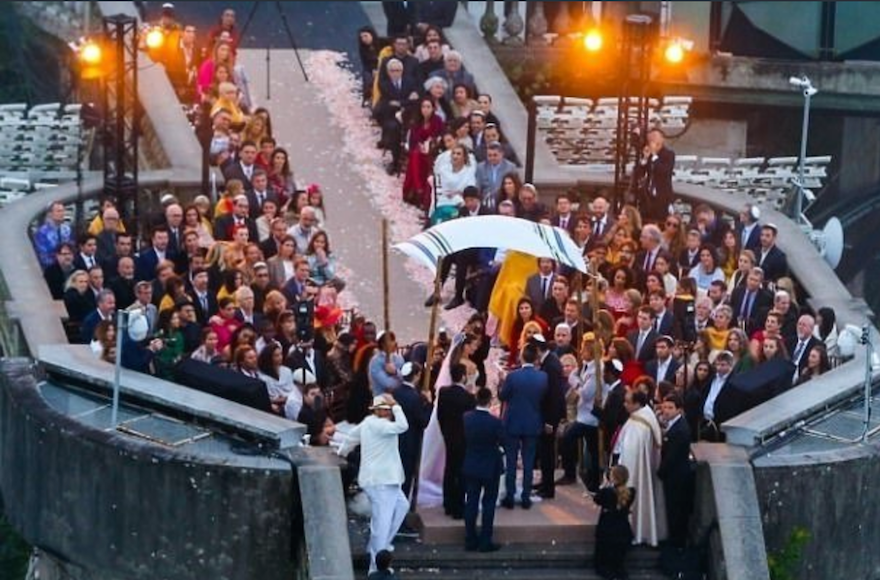 Jerusalem-born Guy Oseary and wife Michelle Alves, who is not Jewish, held the ceremony before a crowd that included Madonna, members of U2, Elon Musk, Chris Rock, Demi Moore and Ashton Kutcher.

“Today is a special day in my life: my marriage to my Brazilian princess. A new and exciting chapter begins in a few hours,” Oseary wrote on Instagram before the ceremony.

An Israeli rabbi, Eitan Yardeni of the Kabbalah Center, co-led the open-air ceremony Wednesday afternoon at the base of Rio’s famed Christ the Redeemer statue and featuring a breathtaking aerial view of Brazil’s second largest city.

“The fog began to roll in during the ceremony, making it appear as if guests were in the clouds while lights burned bright,” the Daily Mirror first reported, adding that the wedding reportedly cost $250,000. The Fasano Hotel, at the elegant Ipanema seafront, was blocked from lodging guests not associated with the wedding.

After the ceremony, guests were welcomed at the sprawling mansion of Brazilian TV host Luciano Huck, who is also Jewish and a friend of the couple.

Today is a special day in my life.. My marriage 🤵🏻👰🏻to my Brazilian princess.. A new and exciting chapter begins in just a few hours.. RIO-October 24-2017 .. #Luckyguy #LOVE ❤️💛💚 #Family #ONE .. I found this photo of Michelle from a show she did many years ago..

New pictures of the Guy Oseary's wedding at the base of Rio's Christ the Redeemer statue! pic.twitter.com/EiAoqqPwcV