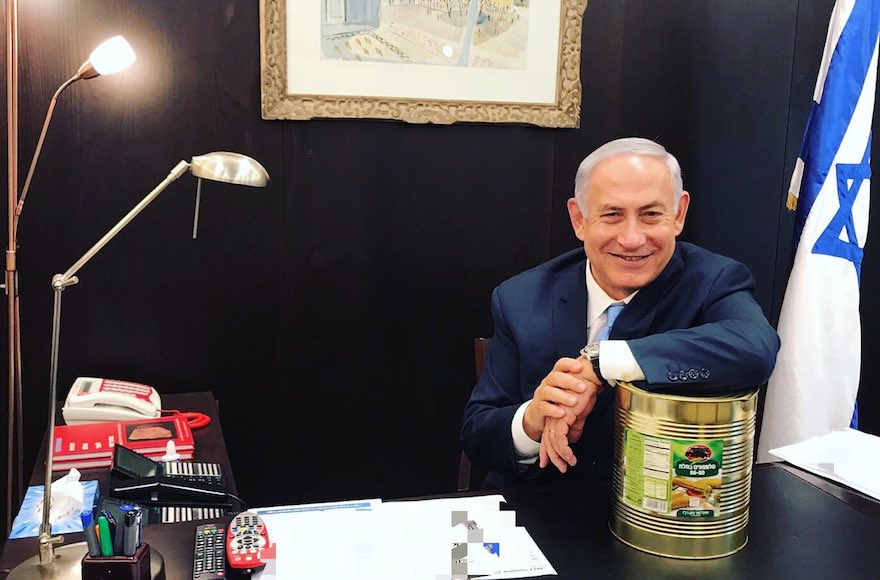 JERUSALEM (JTA) — In over a decade as prime minister, Benjamin Netanyahu has created more than his fair share of political memes — from the cartoon bomb he displayed at the United Nations to decry the Iran nuclear deal in 2012 to his “nix it or fix it” speech to the same body on the same theme five years later.

His latest innovation came Monday in what has been dubbed the “pickle speech.”

Speaking at the opening of the Knesset’s winter session in Jerusalem, Netanyahu assailed the political opposition and media for their allegedly sour outlook, calling them “hamutzim” — literally “pickles,” but colloquially “sourpusses.”

“When pickles talk, you hear conversations like, isn’t the situation here horrible and terrible? Isn’t everything falling apart? By the way, did you order tickets to London or Berlin?”

Netanyahu minister argued that most Israelis are sweet on their country, pointing to Israel’s ranking as the fifth happiest among developed countries, and its young people as second happiest.

“It’s hard for you pickles to accept it,” he said.

The prime minister’s rhetoric quickly became the talk of Israel. In the subsequent hours and days, it was broadcast across traditional and social media and echoed both by Netanyahu’s friends and foes.

Even before he finished delivering the speech, Netanyahu provoked a response: One opposition member walked out of the chamber in protest, and two others were ejected for jeering.

That evening, Channel 2 TV sent a reporter to Ben Gurion Airport to ask Israelis returning from abroad what they thought about the prime minister’s comments. Some conceded he had a point, but others were unimpressed.

“I prefer to be pickles than to be sour like Bibi,” one man said.

Meanwhile, Netanyahu tweeted a photo of himself posing with a large can of Israeli pickles.

“We have a wonderful nation that loves to eat pickles, but it is not sour,” he wrote, adding a pickle emoji for emphasis.

Lawmaker Amir Ohana followed up by posting on Twitter a smiling photo of himself with Netanyahu and a fellow Likudnik, Deputy Foreign Minister Tzipi Hotovely. The caption: “Eating pickles.”

On Tuesday, the Makor Rishon newspaper — apparently siding with Netanyahu over the “fake news” media he has lately assailed — ran a pickle-themed Facebook advertisement. The post included an image of its print edition alongside a jar of pickles.

On the other hand, Meni Naftali, a former employee turned outspoken critic of Netanyahu and his family, tweeted Monday, “It’s actually sauerkraut that [Netanyahu’s wife, Sara] prefers at meals, not pickles.”

Naftali successfully sued Sara Netanyahu when he was a caretaker at the prime minister’s residence and has led months of weekly protests demanding justice in a number of criminal probes targeting the prime minister and his family and associates.

Sounding a lighter note, the National Library of Israel on Monday tweeted images of old-fashioned Israeli pickle labels with the caption “Recorded in the Knesset: Embittered pickles.”

Before long, politicians to both Netanyahu’s right and left were using his own words against him.

“Mr. Prime Minister, you think that pickles exist only on the left. I regret to inform you that there another half a million pickles in Judea and Samaria as well,” he said, using a common Israeli term for the West Bank.

Not to be outdone, Isaac Herzog, the head of Israel’s political opposition, on Wednesday suggested Netanyahu’s pickle speech was responsible for graffiti in the mostly haredi Orthodox city of Bnei Brak branding President Reuven Rivlin a “Nazi apostate.”

“Here it comes – two days ago I said that we would be soon calling President Rivlin a traitor,” Herzog said. “We started with pickles and very quickly we came to ‘Nazi apostates.'”

But Culture Minister Miri Regev took Netanyahu’s side in wishing him a happy 68th birthday Thursday at the prime minister’s residence.

“Every generation has its pickles, people who can’t say a good word about anything with their sour faces,” she said. “No one remembers these people.”

On the other hand, she said, “You will be remembered. You will be written in the pages of history for the good things that you do and not those pickles who don’t do anything.”