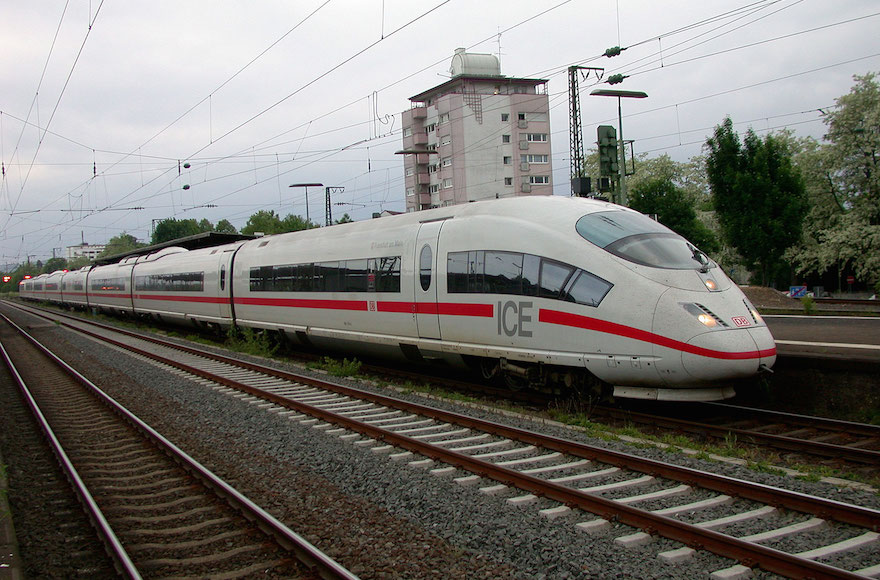 (JTA) — Germany’s national railway has triggered a storm on social media for naming one of its superfast trains after the famous Holocaust diarist Anne Frank, who died in a Nazi camp.

After asking customers to weigh in with suggestions, Deutsche Bahn named several of its new trains after famous Germans, among them the teen aged Frank, whose family fled Germany for Amsterdam after the Nazis seized power in 1933.

The fact that Frank and her family were deported by train from Holland to Auschwitz in 1944 was not lost on critics, who have been tweeting their discontent.

“Am I the only one who finds it disturbing that a train from the successor to the [Nazi-era] Reichsbahn is to be named after Anne Frank?” asks one Twitter user, whose post was shared in Die Welt newspaper.

Another tweet notes that, unlike many German firms who benefited from the Third Reich, the Deutsche Bahn railway has “never paid reparations to forced laborers…. As an historian, it makes me sick” to see them naming a train after Anne Frank.

The Nazi-era Reichsbahn was broken up after World War II; the current Deutsche Bahn was created in a merger between the former West and East German railroads in 1994. The railway has contributed to survivors under the so-called German Foundation agreement and to its Forced Labor Compensation Program.

Deutsche Bahn spokesperson Antje Neubauer said many customers had submitted Anne Frank’s name. She told the BILD newspaper that Frank “represents tolerance and peaceful coexistence of different cultures, which is more important than ever in times like ours.”

Deutsche Bahn had asked customers in September to recommend the name of a famous person for one of its brand-new, advanced ICE trains. Within one month, there were more than 19,400 responses and more than 2,500 different suggestions, according to news reports. A jury selected the best names to use for the new trains.

Other trains will be named for well-known figures from politics, industry and science, including Germany’s first post-war chancellor,  Konrad Adenauer;automotive pioneer Bertha Benz, and physicist Albert Einstein, who fled Nazi Germany for the United States.