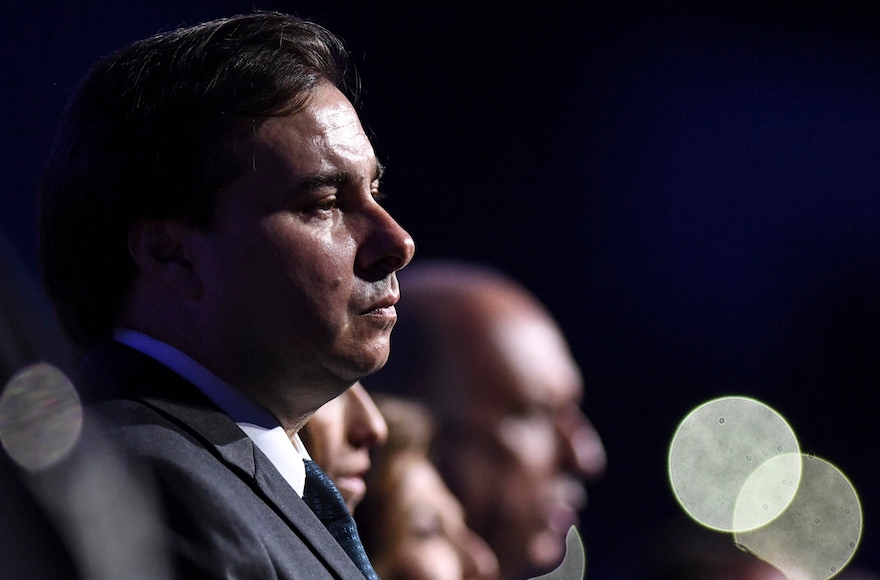 The President of Brazilian Chamber of Deputies, Rodrigo Maia, at the 2016 Paralympics Games at the Maracana Stadium in Rio de Janeiro, Sept. 18, 2016. (Raphael Dias/Getty Images)
Advertisement

RIO DE JANEIRO (JTA) – The president of Brazil’s chamber of deputies is the country’s most senior official to visit Israel in nearly a decade.

Rodrigo Maia, the first in line for succession to run the country since Vice President Michel Temer replaced President Dilma Rousseff in August following her ouster by the Senate, met Knesset President Yuli Edelstein on Monday during his four-day visit to Israel that started a day earlier.

“Unlike Israel, Brazil does not run the risk of terrorism,” Maia told the Brazilian newspaper Folha de S.Paulo. “However, we fight arms and drugs trafficking, and Israel has  border control technologies that can be deployed in our country.”

The visit was agreed upon during a meeting between Temer and Israeli Prime Minister Benjamin Netanyahu in September on the sidelines of the United Nations General Assembly in New York.

Israel’s ambassador to Brazil, Yossi Shelley, was accepted by the Brazilian government in January after Brasilia took all of 2016 to rebuff ex-settler leader Dani Dayan, who was later named consul general in New York.

Maia, who will not see Netanyahu during his visit to Israel, was scheduled to meet with the head of the Palestinian Authority, President Mahmoud Abbas, in Ramallah. Representing the country with the world’s largest Catholic population, Maia will visit the Church of the Nativity and meet the mayor of Bethlehem, Vera Baboun.

On Sunday, the Brazilian lawmaker visited the Yad Vashem Holocaust Memorial and Museum.

Temer was expected to leave the hospital on Monday after prostate surgery. He is Brazil’s most unpopular president ever, according to recent polls.

Temer’s office has been trying to re-establish good ties with the Jewish state after Rousseff’s leftist Worker’s Party had an openly anti-Israel platform for 13 years. However, when Netanyahu made the first visit to Latin America by a sitting Israeli prime minister in September, he included Argentina, Colombia and Mexico on his itinerary, but not Brazil.

The embassy in Brasilia and the Sao Paulo consulate have been Israel’s only diplomatic institutions in Brazil since the Rio de Janeiro consulate was closed several years ago. Israel has honorary consuls in Rio and Belo Horizonte.

Brazil is home to some 120,000 Jews. In 2016, some 700 Brazilians made aliyah to Israel, more than three times the annual average of about 200 new Brazilian immigrants a year and a 45-year record for the South American country. Some 900 Brazilians are expected by the end of 2017, according to the Jewish Agency.