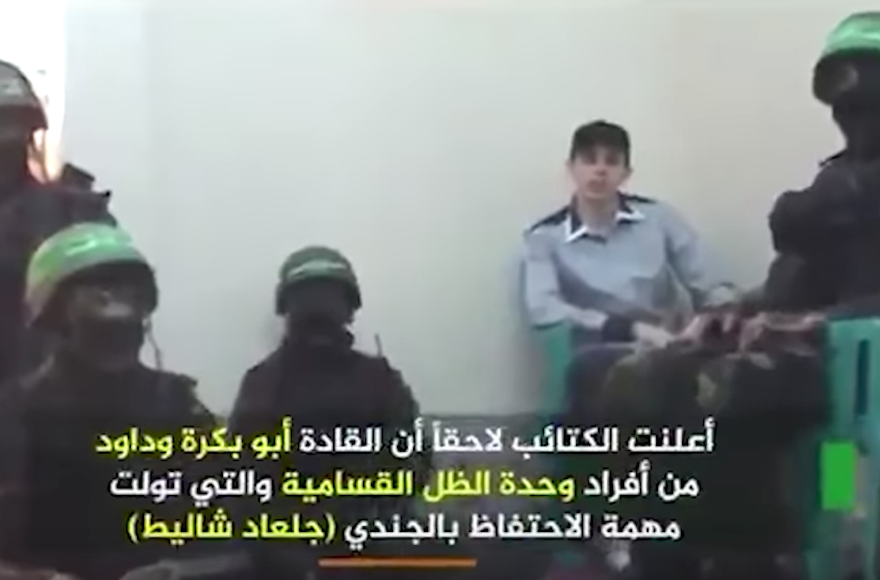 JERUSALEM (JTA) — The terrorist group Hamas released footage of Gilad Shalit taken while the Israeli soldier was in captivity in the Gaza Strip.

The footage released Wednesday shows some of the final moments before Shalit was released in a prisoner exchange deal in 2011 for 1,027 Palestinian prisoners, many of them convicted terrorists responsible for killing Israelis. He had been held by Hamas in Gaza for six years after being captured in a cross-border, guerrilla-style attack.

The footage shows Shalit on the day of his release waiting with masked Hamas guards as he looks around his cell waiting to be transferred to Egyptian intelligence forces. He is wearing the same shirt that he was wearing when he was turned over to Israeli officials.

In January, Hamas released a video showing Shalit smiling during a barbecue and eating, watching TV and reading letters from his family.

The new footage was released to mark the fourth anniversary of the killing of two of the men who guarded Shalit during his captivity. They were inside a Hamas tunnel leading from Gaza to Israel used for attacks when it was bombed by the Israeli military.

Hamas is believed to be holding three Israeli civilians who entered Gaza on their own, as well as the bodies of Israeli soldiers Hadar Goldin and Oron Shaul, who were killed during the 2014 Gaza war.