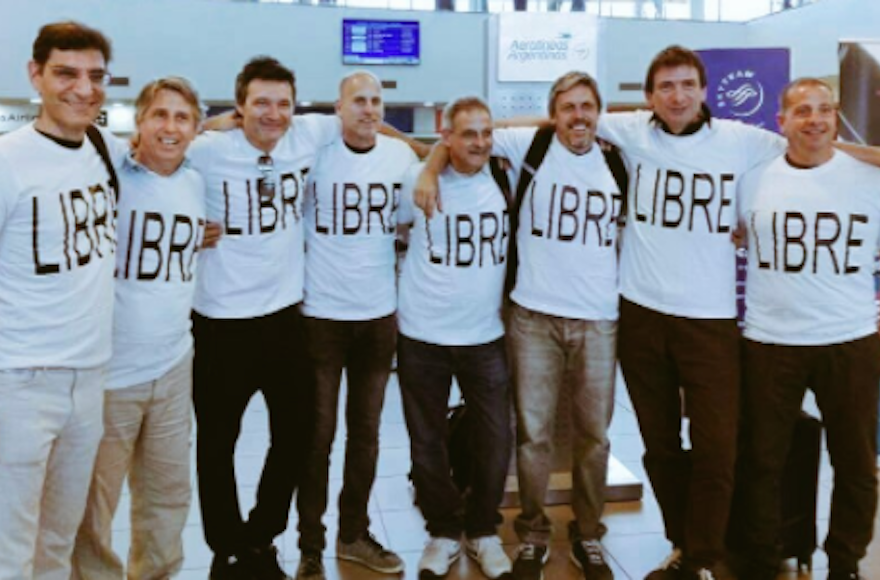 Ariel Erlij, third from left, shown with some of his frien
Advertisement

(JTA) — Five of the fatalities in the terrorist truck-ramming attack in New York City on Tuesday afternoon were Argentine tourists celebrating the 30th anniversary of their high school graduation, including one Jewish businessman.

At least eight people were killed and about a dozen injured when a truck rammed into a crowd on a bike path in downtown Manhattan in what Mayor Bill de Blasio called “an act of terror.”

Erlij, 48, is a Jewish steel mill owner from the city of Rosario in central Argentina. He reportedly paid for two of his high school friends to go on the trip so they could all be together for the anniversary. They graduated in 1987 from the Polytechnic School in Rosario.

Another Argentine, Martín Ludovico Marro, was injured and taken to a Manhattan hospital. Four others from the group were not hurt.

Misaskim, an American Orthodox Jewish not-for-profit organization that provides services for the care of the dead, is working with the New York City  Medical Examiner’s Office to ensure that Erlij’s body is handled according to Jewish custom, the Yeshiva World News reported.

“Argentina reaffirms its strongest condemnation of terrorist acts and violence in all its manifestations and reiterates the need to deepen the fight against this scourge,” the Argentine Foreign Ministry said in a statement.

President Mauricio Macri tweeted twice about the terrorist attack, first saying that he was “deeply moved by the tragic deaths this afternoon in N.Y.” and offering to assist the relatives of the Argentine victims. The second tweet said: “Again we make a call for peace, for an end to these horrors.”

Belgian Foreign Minister Didier Reynders said in a tweet Tuesday night that a Belgian national also was killed in the attack.

In a message to President Donald Trump, New York Gov. Andrew Cuomo and de Blasio sent Wednesday morning, Israeli Prime Minister Benjamin Netanyahu wrote: “We stand with our friends in New York and all Americans following yet another horrible Islamist terror attack. We pray for the victims and their families. Together we will defeat this scourge.”

The suspect, Sayfullo Habibullaevic Saipov, 29, an Uber and commercial truck driver from New Jersey, was identified as a Uzbek national who is a permanent U.S. resident. He arrived in the United States in 2010 and has a green card, according to reports. Police shot Saipov after he exited the rented truck he was driving and ran through the street waving pellet guns. He was taken to a New York hospital, where he is recovering from a gunshot to his middle.

Saipov reportedly left a note in the truck saying he committed the attack for the terrorist group ISIS.

“Based on the information we have at this moment, this was an act of terror,” de Blasio said at a news conference.