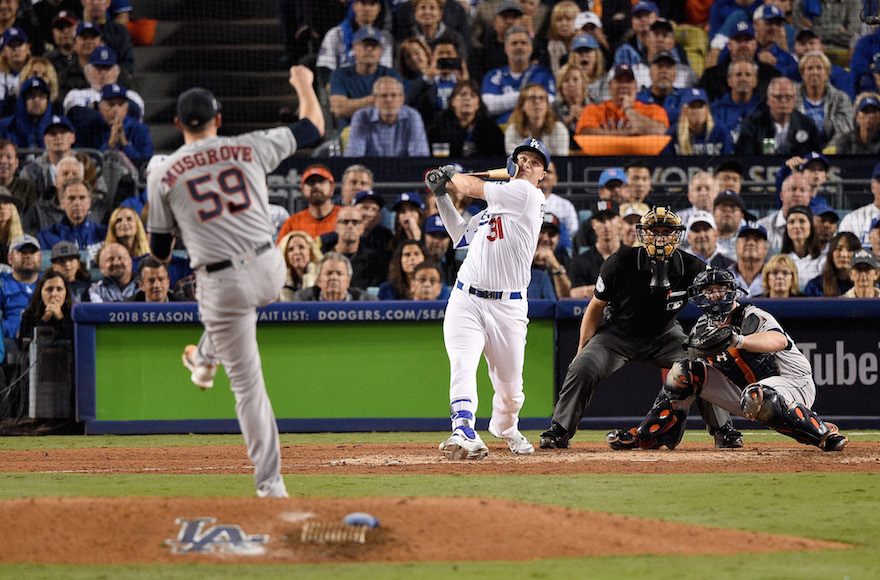 Joc Pederson hitting a solo home run during the seventh inning of game six of the World Series against the Houston Astros at Dodger Stadium in Los Angeles, Oct. 31, 2017. (Kevork Djansezian/Getty Images)
Advertisement

(JTA) — Joc Pederson of the Los Angeles Dodgers has set a new home run record for Jewish players in one World Series.

Pederson, a lefty-swinging outfielder, blasted a homer in the seventh inning of his club’s 3-1 win over the visiting Houston Astros in Game 6. The shot, to left field, was his third of the Series and moved Pederson past Hall of Famer Hank Greenberg, the Detroit Tigers’ slugger who had two homers in the 1934 Fall Classic.

Greenberg still holds the mark for most runs batted in by a Jewish player in one World Series — at least for now, since there’s another game left — with seven. Pederson has five, as does Alex Bregman, the Astros’ Jewish third baseman, along with two home runs.

Like Pederson, Bregman has made Jewish history in the World Series: On Sunday night, in Game 5, he became the first Jewish player to win a game with a walk-off hit.

The Dodgers and Astros will meet in the decisive Game 7 in Los Angeles on Wednesday night.