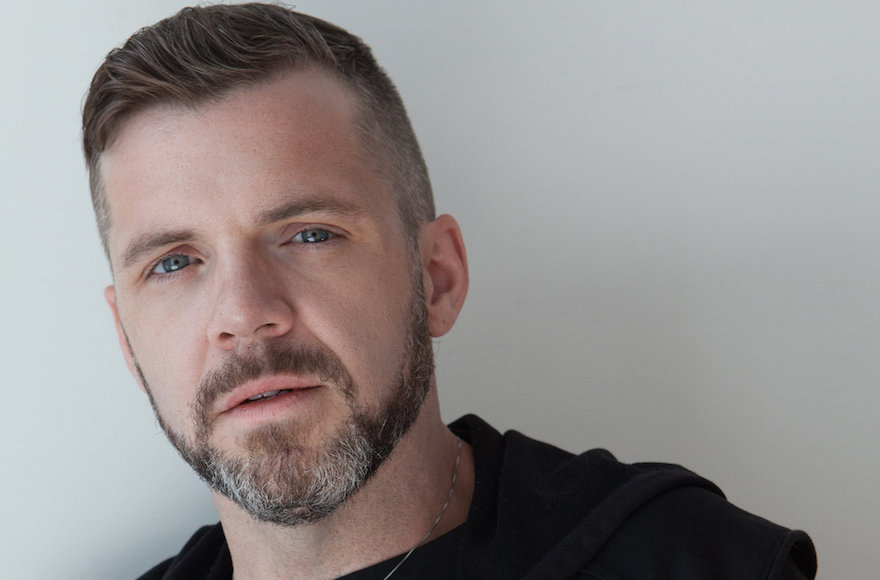 Comedian H. Alan Scott, 35, is celebrating his bar mitzvah five years to the day from his last chemotherapy treatment for testicular cancer. (Courtesy of Scott)
Advertisement

When H. Alan Scott looked up through the mikvah waters, he says he saw the shadows of his past and present lives undulating above him: Poor Mormon kid. Gay man. Comedian. Cancer survivor.

Then his head broke the surface for the third time, and he felt that at last he had emerged with an identity that fit perfectly: Jew.

That was five years ago.

Now Scott, 35, is celebrating another milestone: This month he’s throwing himself a bar mitzvah.

If you think the story of a gay, former Mormon cancer survivor trying to find his place as a Jew sounds like the stuff of a movie, Scott agrees. He’s been chronicling his journey from his Mormon boyhood in the Midwest to his big Hollywood bar mitzvah in a film he’s making called “Latter Day Jew.”

Scott now lives in Los Angeles and works as a stand-up comedian and co-host of two podcasts. One, “On the Lanai,” has been featured on Fusion TV and Entertainment Weekly’s list of best podcasts of the week. Scott and co-host Kerri Doherty watch and dissect an episode of the 1980s sitcom “Golden Girls.” Scott has over 37,000 Twitter followers, and his writing has appeared in OUT, Vice, Thought Catalogue and MTV News.

He never meant to be Mormon, Scott says, successfully resisting baptism for four years before allowing himself to be plunged into the water at age 12 — only after he noticed the lean, hunky elder who would be holding him during the ceremony. Even then, Scott felt there was something unmistakably Jewish about himself.

“Growing up, I always sounded and acted like a cross between Woody Allen, Barbara Streisand and Bette Midler,” Scott quips.

It all came together for Scott — where else? — as a student at DePaul, a Catholic university in Chicago. Discussing his reluctant Mormon baptism with his Jewish academic counselor, she confided that she thought he was Jewish when they met. It wasn’t because he talked like a Borscht Belt comedian, but because of all the questions Scott asked before his baptism — about faith, history and language.

Scott’s meetings with his counselor marked a turning point.

“Before our conversations, Judaism had only been part of my comic identity,” Scott said. “Now it was becoming my spiritual one, too.”

Scott began hanging out with Jews and reading Jewish books. But he never considered conversion until he was diagnosed with testicular cancer.

“I was single and there was no career happening, and I had it in my head that I would just marry a Jew someday,” Scott said. “In treatment, I thought that’s a really lame thing to do, wait for someone else. I don’t do this for anything else in my life, why am I doing it now?”

“It’s not that I converted because I went through chemotherapy; it was just that that’s when I had the free time,” Scott deadpans. “I couldn’t work, and to be Jewish, you have to read a lot.” 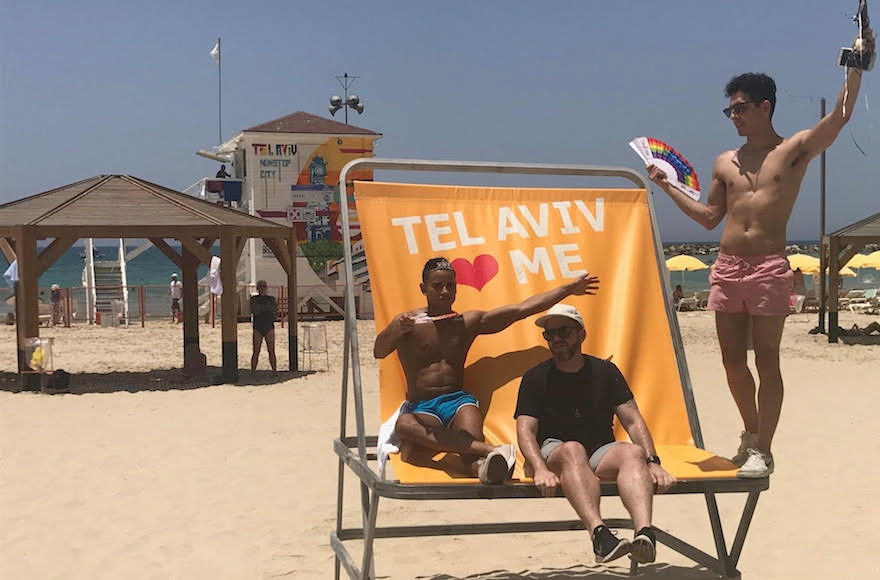 H. Alan Scott is chronicling his journey from his Mormon boyhood to his big Hollywood bar mitzvah in a film he’s making titled ‘Latter Day Jew,’ which included this shoot on the beach in Tel Aviv. (Courtesy of Scott)

He was guided by Rabbi Zachary Shapiro of Temple Akiba in Culver City, California, who says Scott immediately struck him as having a Jewish soul.

“It wasn’t because he is a mensch or because he knew the ‘lingo,'” Shapiro said. “It was because he asked penetrating questions that really made me think.”

Scott says he was attracted by Judaism’s love of debate and questioning above all else.

“In no other religion that I know of can you openly say ‘I’m not sure about that’ and not be kicked out,” he said. “Doubt is very Jewish.”

Even once he converted in 2014, Scott continued to struggle with his identity.

“When you convert of your own free will, you struggle with what kind of Jew you are, what’s your purpose,” he said.

Scott became involved with Asylum Arts, which works to connect and inspire Jewish artists around the world, and through it met philanthropist Lynn Schusterman. Less than a month later, the Schusterman Foundation sent him on his first trip to Israel on a program called REALITY Experience. The trip radically expanded his concept of what being Jewish could be.

“I learned that you don’t have to be religious to be a Jewish leader,” he said. “By advocating for Israel and by openly identifying as Jewish, you are acting as a Jewish leader.”

It was a revelation. Scott began to be involved in Israel advocacy and the LGBTQ pro-Israel organization A Wider Bridge.

“These organizations made me realize my purpose as a Jew — that I have to be vocal and tell my story,” he said.

That’s why Scott is so excited about “Latter Day Jew.” Though his November bar mitzvah was planned as the film’s climax, Scott insists it’s more than a stunt. The date of the ceremony marks five years since he finished chemotherapy.

“It’s about what it means to choose who you are and be your authentic self rather than the identity given to you from outside forces,” he said of the film.

Scott says he’s learned from Judaism that the community you choose is much larger and more important than yourself.

“So much of my life had been all about me,” he said. “Stepping back and recognizing there are forces larger than myself was very grounding for me.”

His friend Eliot Glazer, a Jewish performer who is now a writer for Fox’s “The New Girl” and Comedy Central’s “Broad City,” said Scott’s enthusiasm for Jewish community prompted him to re-examine his own Jewish identity.

“He has renewed my faith in Jewish community and inspired me to rediscover what it means to be a Jew and how Judaism works,” Glazer said.

Rabbi Shapiro said Scott’s journey has deepened his own Judaism, too, inspiring him to ask himself: “What kind of Jew am I?”

That, essentially, is Scott’s life story.