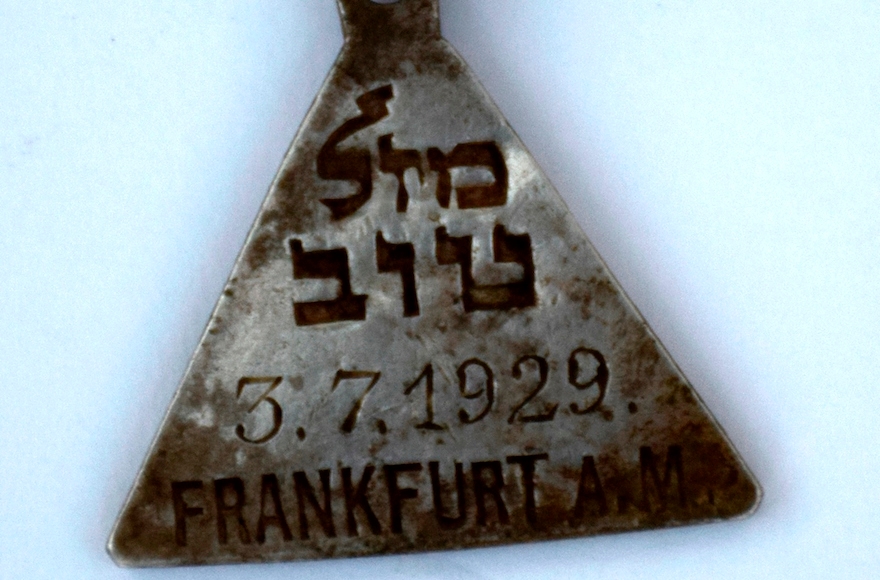 BERLIN (JTA) – In late 1943, the Germans were desperate to cover all traces of their death camp in Sobibor, Poland. They demolished buildings, bulldozed the evidence, planted trees.

More than 70 years later, archaeologists led by Yoram Haimi of the Israel Antiquities Authority set about excavating the site, uncovering gas chambers, mass graves  — and, late last year, a girl’s silver pendant. It is engraved with a date, the place name “Frankfurt” and the Hebrew words “mazal tov.”

A cry from the earth, the remnant from a killing ground has opened up a tragic past to a family that knew little about it.

Thanks largely to a grandson of Holocaust survivors who is an amateur genealogist, the living relatives of the girl whose pendant it was have been identified.

On Nov. 13, more than 30 relatives of the girl, Karoline Cohn, will gather in Frankfurt am Main, Germany, to dedicate a “stumbling stone” memorial – a small brass plaque with the date of her birth and place of deportation at her last known address, Thomasiusstraße 10.

The memorial will be installed by artist Gunter Demnig, who created the project in 1996. Since then, more than 50,000 of the memorials have been installed throughout Europe.

Many of Karoline’s kin have never met before. They will be coming from the United States, Israel, Japan, Great Britain, Nicaragua and Hong Kong to honor the memory of someone they never knew.

“We had this person who was completely forgotten, even by her surviving relatives,” said the amateur genealogist, Chaim Motzen, who pieced together Karoline’s family tree. He said some people he contacted did not even know they had any connection to the Holocaust.

“Through this pendant, people are learning about each other and their history, and about Karoline,” said Motzen, speaking from Jerusalem. “We now know the fate of Karoline’s cousins, aunts and uncles, many of whom were murdered in the Holocaust; people who were mostly forgotten.” 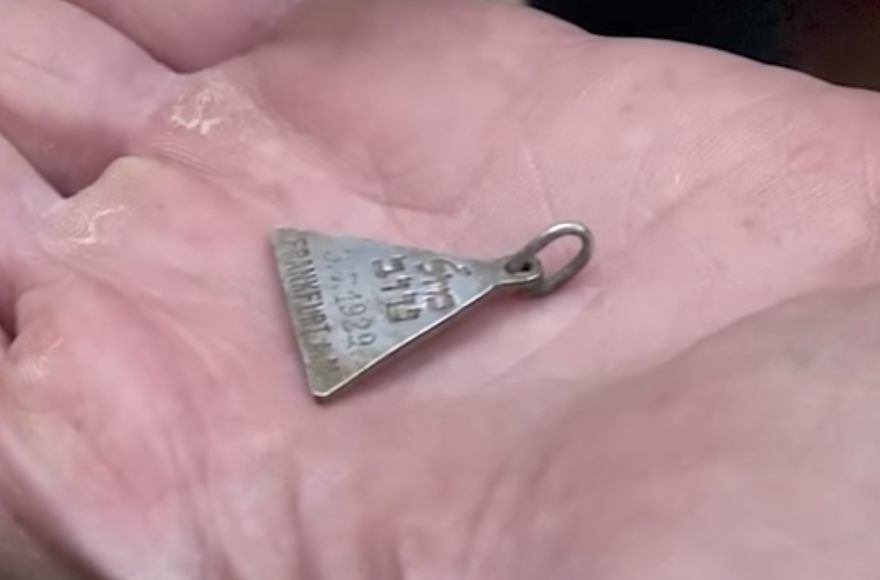 An archaeologist holding a pendant discovered during excavations of the Sobibor death camp in Poland in 2016. (Conference on Jewish Material Claims Against Germany)

It wasn’t easy. Soon after the pendant’s discovery, researchers at Israel’s Yad Vashem-The World Holocaust Remembrance Center — led by Joel Zisenwine, its deportations database director — used records to link the place name and birth date on the pendant, July 3, 1929, to Karoline Cohn. Papers revealed that she and family were deported from Frankfurt to Minsk on Nov. 11, 1941, when the girl was 12. Karoline may have been among the 2,000 Jews sent to Sobibor in Nazi-occupied Poland in 1943.

Spurred by the news of the sensational find at Sobibor, Motzen, a renewable energy entrepreneur by day, set about piecing together a family tree of living relatives of Karoline Cohn and also those who perished in the Holocaust. He managed to identify more than 100 cousins around the world.

He found clues in the Yad Vashem archives, in obituaries, in marriage and death records. One contact led to another. Motzen recently located relatives in California who have “a trove of letters, including one from the mother of Karoline to her niece in America.” They are being translated.

Barry Eisemann, 72, of Arlington, Virginia, is a first cousin of Karoline Cohn who hadn’t even known of her existence until Motzen contacted him and his daughter, Mandy, in January. He will attend the Frankfurt am Main ceremony.

Motzen, who will also attend the memorial ceremony, “started talking about the pendant, and how the only other one known had belonged to Anne Frank,” Mandy Eisemann told JTA in a call from her home in Maryland. “I didn’t understand why he was calling me until he revealed that he believed that my father and his sister Michele were the closest living relatives to the little girl.”

The triangular pendant is nearly identical to one that Anne Frank, who was also from Frankfurt, was known to have worn.

From Motzen, Barry Eisemann learned that his father’s sister, Elsa, had married Richard Cohn, and that they had had two daughters, Karoline and Gitta — Eisemann’s first cousins. All of them died in the Holocaust. 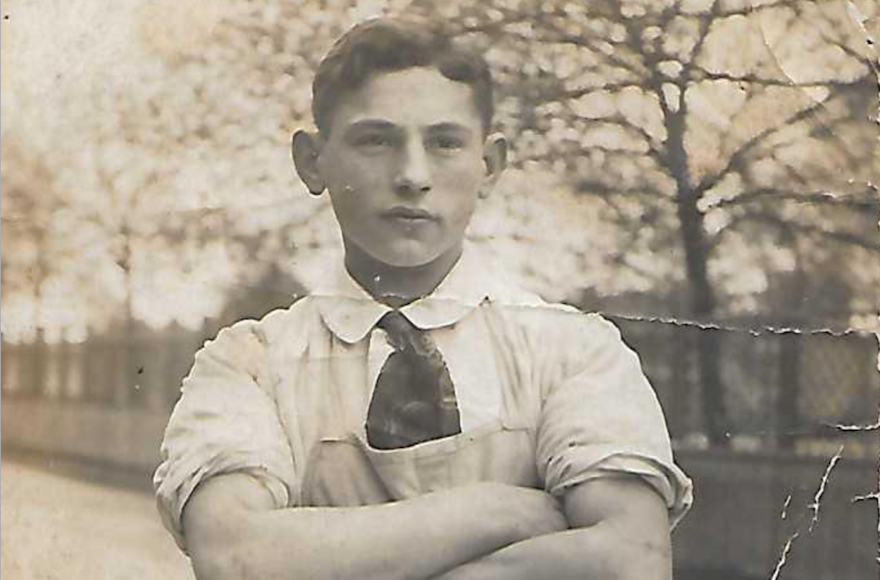 Morris “Moritz” Eisemann, seen in a photo his son Barry says was taken in his native Germany circa 1920. Eisemann’s sister was the mother of Karoline Cohn, a girl whose pendant was discovered in an excavation at the Sobibor death camp and who did not survive the war. (Courtesy of Barry Eisemann)

“I did not even know their names before,” Barry Eisemann told JTA, speaking from his home. His father, Morris (formerly Moritz) “never really talked about the Holocaust and what happened to the family. … He was protecting my sisters and me from knowing about the tragedy and the horror.”

While in Germany, Barry Eisemann will visit the town of his father’s birth, Bad Orb. And his daughter is bringing her children on the trip.

“I wanted them to experience this because it’s not just our family history which they should know about, but also Jewish history and world history,” Mandy Eisemann said. “I want them to understand how fortunate we are to be here.”

The stepping-stone event is sponsored by the Conference on Jewish Material Claims Against Germany, which funded the filming of the excavation at Sobibor and backs the Yad Vashem Archive.

Following the memorial ceremony, archaeologists Haimi of Israel and his Polish colleague Wojciech Mazurek will speak at the Philanthropin Jewish school in Frankfurt, which Karoline most likely attended. Teenagers from the Anne Frank Public School will attend, and will hold a workshop and dialogue.

“We always talk about Anne Frank, but sometimes we forget that there were many other families, many other children that maybe experienced something similar and are never really mentioned,” principal Nicola Gudat said in a telephone interview. “We thought it would be interesting for our students to think about another girl about the same age, also living in Frankfurt, about how her life would have been.”

Some 1.5 million children were murdered in the Holocaust.

“Some people understand the magnitude,” said Greg Schneider, executive vice president of the New York-based Claims Conference. “But the names and stories of specific people are not known, they are forgotten.

“We are using this one story, putting together the known pieces, and trying to say that we can’t forget who these people were and how they were murdered.”

In all, some 250,000 Jews were murdered at the extermination camp in less than two years.

About 10 years ago, the archaeologists began searching for clues in the ruins of Sobibor. They found the remains of the hut where women were forced to undress and shaved before being gassed. They located the remnants of four gas chambers, each capable of killing up to 100 people at a time. They found hairpins, jewelry and other small objects.

Karoline’s pendant reportedly will be kept at a Holocaust memorial in Poland.

What happened to her “happened for hundreds of thousands of people,” Schneider said.

“To me, the image is haunting,” he added. “She left us a clue along the way, and she is calling out, ‘don’t forget me.'”

For Barry Eisemann, a whole chapter of history and a branch of his family tree have been restored — a chapter and a branch his father had withheld.

Now he has one wish: “To hold that pendant in my hand. It is no bigger than an inch, or an inch and a quarter. But I think if I held it in my hand,” he said, “I would feel a spiritual connection to Karoline.”