Israel’s president cheers a united Spain. Or did he? 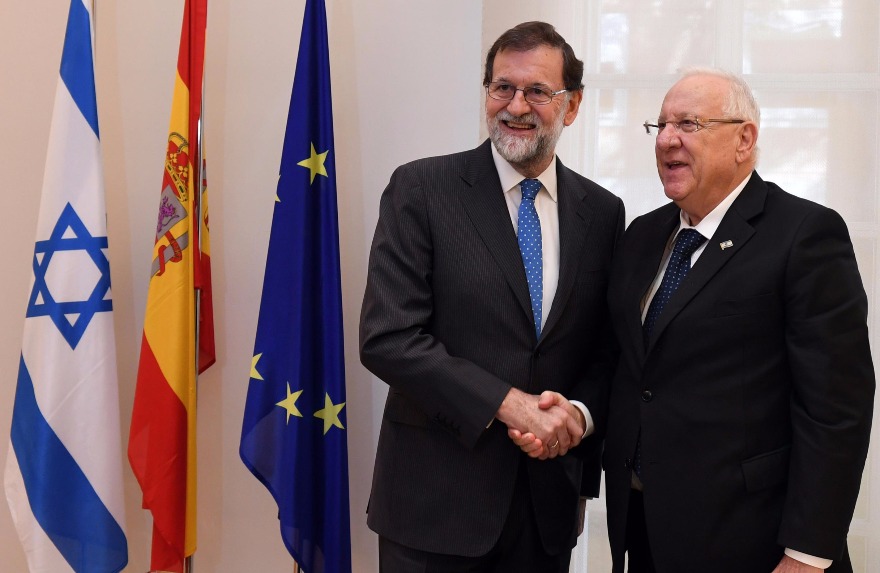 (JTA) — Israeli President Reuven Rivlin may court controversy back home, but in Madrid he is almost universally loved right now.

That’s because during his visit to Spain this week, Rivlin – a Likud maverick and frequent critic of Prime Minister Benjamin Netanyahu – appeared to diverge with his government’s neutrality on Catalonia’s failed secession from the kingdom last month.

At least that was how Spanish media – including in Catalonia – interpreted Rivlin’s speech in the Spanish parliament Tuesday.

“Spain is one country for us, one sovereign entity, and the problems it faces these days are internal,” Rivlin said. “Our relations with all the citizens of Spain are dear to us, and we pray that the current challenge will be solved through understanding.”

El Periodico, a Catalan daily, reported that with that speech, “Israel broke its nonalignment and supports the government over the separatists” — an interpretation that other media in Spain repeated enthusiastically.

But examined against more outspoken comments by other heads of state who forcefully opposed Catalan secession, Rivlin’s actual words can also seem like a noncommittal description of the current Israeli policy, offering no commitment to end Jerusalem’s carefully crafted ambiguity on the issue.

Take, for instance, the clear-cut position expressed last week by British Prime Minister Theresa May, who said: “The United Kingdom does not and will not recognize the unilateral declaration of independence made by the Catalan regional parliament. It is based on a vote that was declared illegal by the Spanish courts.”

Compared to that, Rivlin’s assertions about Israel’s current view of Spain seem less like a departure than a continuation of the government’s laconic and anemic statement on Nov. 1, which read: “Israel and Spain share longstanding, strong and friendly relations, rooted in our common historical heritage and shared democratic values. Israel hopes that the internal crisis in Spain will be resolved quickly and peacefully and through broad national consensus.”

Asked whether Rivlin’s statement meant that he or Israel now oppose Catalan independence, a spokesperson for Rivlin repeated the official language, adding it was crafted in consultation with the foreign ministry. The spokesperson declined to say whether Rivlin’s remarks constitute a rejection of Catalan secession and said they would not “be drawn to comment specifically in relation to the Catalan issue” at all.

This means that, the Spanish media’s love for Rivlin notwithstanding, Israel remains one of only a handful of Western nations that have remained neutral on the dispute. Madrid received public support of its stand against Barcelona from the European Union, the United States, Canada, Japan and Mexico, among other international players.

This divergence is part of an Israeli policy of nonalignment under Netanyahu, who has remained neutral also on the Ukraine-Russia conflict, the civil war in Syria and on the vote in Britain to leave the European Union – all issues on which other Western countries have taken clear-cut positions. By contrast, Netanyahu came out in favor of the bid for Kurdish independence in Iraq in September – a move Israel for decades was careful to avoid for fear of damaging its relations with Turkey.

But in the Catalan dispute, Israel has potential dividends to gain — and risks to run – depending on who it supports.

Spain is a generous financier of some organizations that are deemed anti-Israel. As long as Netanyahu remains noncommittal on Catalonia, he may leverage Israel’s position on the issue to influence Spanish policies on Israel.

And should Catalan independence succeed after all — the gambit has taken a setback recently, with the arrest of the leader of the Catalan regional government, Carles Puigdemont — neutrality may be a good beginning to a relationship with what could be Europe’s newest country.