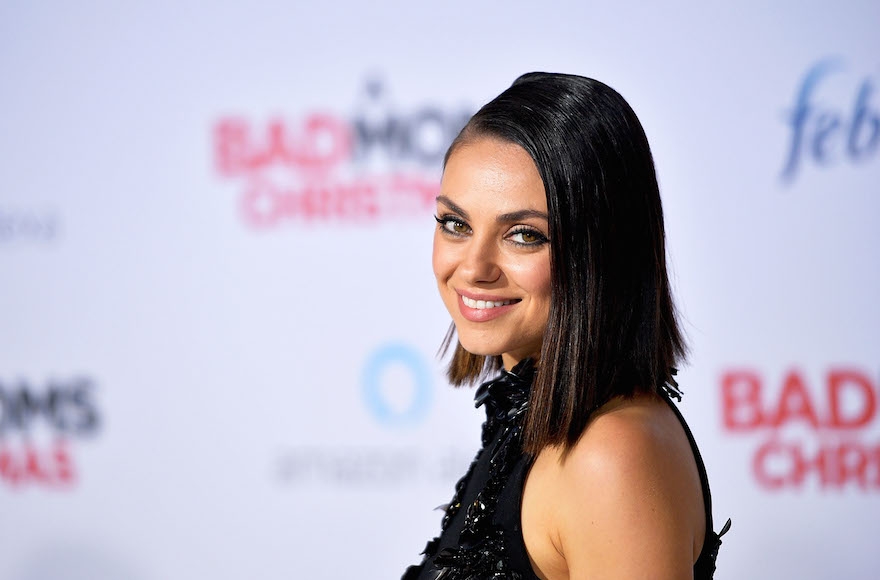 (JTA) — Mila Kunis and husband Ashton Kutcher tried to visit the actress’ childhood home in Ukraine with her parents, but a local who opened the door would not let them in, she said in an interview.

Kunis, who is Jewish and in 2012 recalled experiencing anti-Semitism in her native Chernivtsi, recalled her August trip there with Kutcher in an interview published this month in the Net-a-Porter online magazine about fashion. The interview prompted angry and defensive reaction from locals, a Ukrainian news site reported.

Kunis, 34, was with Kutcher in Budapest, which is 375 miles west of Chernivtsi, for the filming of “The Spy Who Dumped Me.” Kutcher suggested she visit Chernivtsi during the trip for the first time since she left Ukraine with her family for the United States in 1991.

“But I was never going to go without my parents. So my parents came to Budapest, then onto Ukraine, and Ashton and I went for one day,” Kunis said. “It was trippy. There’s a part of you that wants to feel something” toward the place, she said in the interview, but “I had nothing.”

“We went to our [old] house and I knocked on the door because we really wanted to look inside. And [the owner] was like, ‘No!’ She did not care. I said, ‘I used to live here when I was little, my parents are here.’ … She wouldn’t even open the door. The whole experience was very humbling.”

In a 2012 interview with the British Sun tabloid, Kunis, whose parents named her Milena, said that she saw anti-Semitic graffiti in her school in Chernivtsi.

“One of my friends who grew up in Russia, she was in second grade. She came home one day crying,” Kunis recalled. “Her mother asked why and she said on the back of her seat there was a swastika. This is a country that obviously does not want you.”

When the actress was 7, her parents — Mark, a mechanical engineer, and Elvira, a physics teacher — decided to move to the United States with her and her brother, Michael.

Some residents of Chernivtsi, including people who knew the Kunis family, took offense at her unemotional description of the trip and at the 2012 interview, Komsomolskaya Pravda reported.

“We still have a large Jewish community, so talks of ‘anti-Semitism’ are nonsense and insulting,” one resident, Lyudmila Skidova, was quoted as saying.

Last year, the words “death to the Jews” were spray-painted on the city’s main synagogue.