Richard Dreyfuss accused of exposing himself to young writer in 1980s 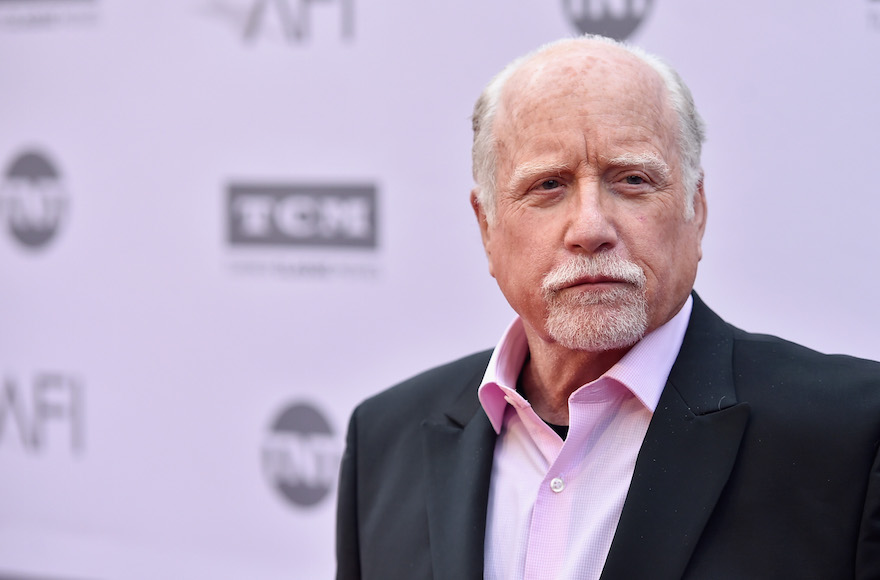 Richard Dreyfuss, shown in 2016, appeared to criticize Israel’s treatment of the Palestinians in an interview ahead of his new film's release. (Alberto E. Rodriguez/Getty Images for Turner)
Advertisement

(JTA) — A young writer accused actor Richard Drefyuss of sexually harassing her several decades ago, including exposing himself to her.

Jessica Teich made the allegations in an article published Friday by the Vulture culture news website. She said the harassment was constant for two to three years in the mid-1980s when she worked as a writer alongside Dreyfuss, who was at the height of his fame.

“He created a very hostile work environment, where I felt sexualized, objectified and unsafe,” she said.

At the time of the alleged harassment, Teich, 58, was in her mid-20s and worked as a researcher and junior writer on Dreyfuss’s TV passion-project called “Funny, You Don’t Look 200: A Constitutional Vaudeville.” Although Dreyfuss was married with a child, Teich said he often tried to kiss her in professional settings, slipped her “I love you” notes during meetings and made sexual comments to her.

Most shockingly, Teich said, Dreyfuss once called her into his trailer and then showed her his erect penis.

“I remember walking up the steps into the trailer and turning towards my left, and he was at the back of the trailer, and just — his penis was out, and he sort of tried to draw me close to it,” she said. “I can’t remember how my face got close to his penis, but I do remember that the idea was that I was going to give him a blow job. I didn’t, and I left.”

Teich said she somehow exited the trailer and did not tell anyone about the incident. She said she “trusted” and “liked” Dreyfussm and felt that she must have asked for it in some way. At the same time, she said, he had a lot of power over her.

“He was famous, he was rich, he had an Oscar,” she said. “He was my boss. There was no question about it.”

Teich said she was motivated to come forward by Dreyfuss’s response to his son accusing actor Kevin Spacey of groping his crotch when he was 18 years old. A few hours after BuzzFeed ran the story, Drefyuss tweeted that he was “incredibly proud” of his son.

Many cheered the fatherly show of support, but Teich said she grew “bothered.”

“When I read about his support for his son, which I would never question, I remember thinking, ‘but wait a minute, this guy harassed me for months,’” she said. “He was in a position of so much power over me, and I didn’t feel I could tell anyone about it. It just seemed so hypocritical.”

Dreyfuss, 70, responded with a statement included in the article apologizing for his behavior, and admitting to having been an “asshole” at the time, but said he was not an “assaulter.”

“I emphatically deny ever ‘exposing’ myself to Jessica Teich, whom I have considered a friend for 30 years,” he said. “I did flirt with her, and I remember trying to kiss Jessica as part of what I thought was a consensual seduction ritual that went on and on for many years. I am horrified and bewildered to discover that it wasn’t consensual. I didn’t get it. It makes me reassess every relationship I have ever thought was playful and mutual.”

Know for his roles in films like “Jaws,” “Close Encounters of the Third Kind” and “Mr. Holland’s Opus,” Dreyfuss has also played famous fellow Jews, including last year in an ABC miniseries about Bernie Madoff. In the 1990s, he often spoke on behalf of Peace Now, an Israeli organization that promotes peace with the Palestinians. Dreyfus has continued to comment on Israeli politics from a left-wing perspective.

Teich, who also is Jewish and last year wrote a memoir, “The Future Tense of Joy,” detailing a year of sexual abuse and beatings she experienced at 16, said the statement is “more than I thought anyone would get from him,” and she responded to “the sense of hurt that underlies his words.” But, she added, the word “flirt” minimizes what happened and “I’m not that guy’s friend.”

Since news reports last month detailing allegations by women that Jewish Hollywood mogul Harvey Weinstein sexually harassed and sexually assaulted them, millions of women have come forward to recount their experiences of such behavior.

On Thursday, it was reported that a former writer on “Mad Men” accused the Jewish creator of the hit ABC series, Matthew Weiner, of harassing her at work. On Wednesday, a former actor accused Charlie Sheen, whose mother is Jewish, of having sex decades ago with the late Jewish child actor Corey Haim. Sheen was 19 years old and Haim was 13 at the time.

Corey Feldman, 46, a Jewish actor who is planning to make a documentary to expose an alleged network of pedophiles working in Hollywood, alluded to the event in his autobiography.

Both Sheen and Weiner have denied the allegations.