Israel’s president plays peacemaker between his government and American Jews 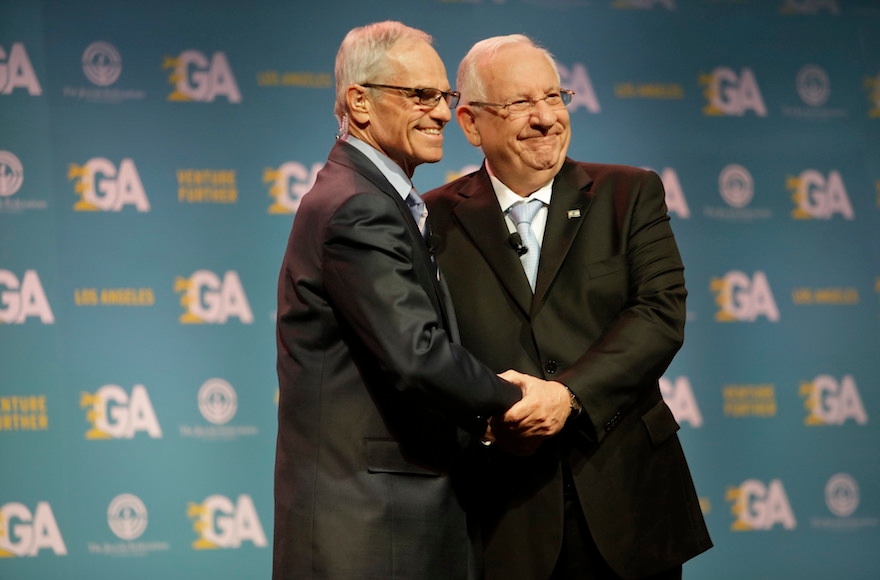 Speaking at the annual General Assembly of the North American Jewish federation movement, Israel’s president sympathized with attendees’ complaints that Israel was ignoring their calls for religious pluralism there, but also urged patience with Israel’s political process.

“Whether we like it or not, in the only Jewish democratic state, ‘religion and state’ is a political issue – maybe the most explosive one,” said Rivlin, addressing some 3,000 Jewish professionals and volunteer leaders. “You know, my friends, around five Israeli governments have fallen on questions like ‘can combat aircraft, not on-mission, land in Israel on Shabbat?’ Or on the question of ‘who is a Jew?’ That is democracy.”

Rivlin’s address at the JW Marriott Hotel here came a few hours after the Jewish Federations of North America issued a resolution highly critical of the Israeli government for freezing a deal on non-Orthodox prayer at the Western Wall and for its support for a bill that would give Orthodox authorities in Israel a monopoly on religious conversions to Judaism. Local Jewish federations raise and distribute money for Jewish causes in their communities and Israel, and usually try to avoid criticizing the latter.

Leaders and allies of the Reform and Conservative movements, representing the majority of affiliated North American Jews, say these recent moves by the Israeli government are alienating their followers and dampening Jewish support for Israel. Changing policy at the Western Wall, whose Orthodox authorities prevent types of prayer typical in non-Orthodox synagogues, has become a goal and a symbol for proponents of Jewish religious diversity in Israel.

Rivlin alluded to these concerns in his 30-minute address.

“On the painful issue of the Kotel agreements, it causes such pain that the symbol of unity, the wall of our tears and joy, has become a symbol of division and disagreement,” he said, using the Hebrew word for the Western Wall. “The challenge of building the relationship between us must begin with getting to know each other better.”

Rivlin asserted that the Western Wall agreement, frozen in June after being thrashed out in 2016 by Prime Minister Benjamin Netanyahu’s government with representatives of the federations, the Jewish Agency, Women of the Wall and the non-Orthodox streams, was “led by our government in order to try and bridge the gap” between Israel and the Diaspora. “I hope that in the future we can return to the table together and reach an understanding on this important issue.”

The avuncular Rivlin also reminded the crowd of the traditional issues that have tended to bind Jewish fundraisers to Israel, including Israel’s security needs, a mutual fight against anti-Semitism, and the movement to boycott Israel and U.S. support for the Jewish state. He also recounted, to warm applause, his pedigree as a member of a Jewish family that has lived in Jerusalem since 1809.

But at the end of his speech he returned to the theme of frayed ties, saying he would be “happy” to plan a conference at his residence in Jerusalem for Jews and Israelis to work on shared goals.

In 1989 Rivlin, then a member of the Israeli Knesset, visited a Reform synagogue in Westfield, New Jersey, and afterward shocked his hosts by calling Reform Judaism “idol worship” and “a completely new religion without any connection to Judaism.”

In a news briefing before Rivlin’s address Monday, his spokesman said the president had “changed his view regarding the Jewish communities around the world, especially North America.”

In the three years since becoming Israel’s 10th president, during which he reached out to Reform leaders, “he started realizing the importance of the Jewish community and the need for the strong bonds between Israel and the Jewish community,” said David Saranga.

Netanyahu is scheduled to address the General Assembly via satellite on Tuesday.