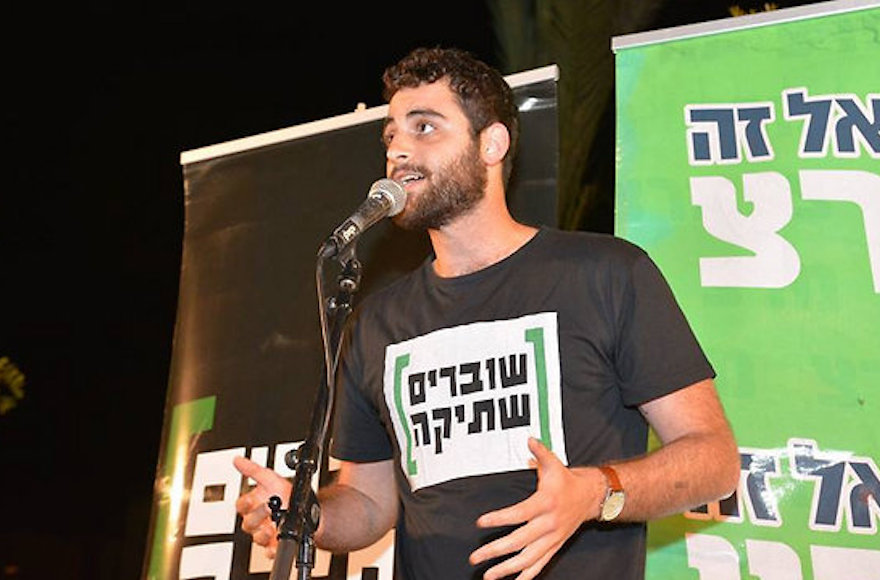 JERUSALEM (JTA) — Israel may launch a new investigation into a soldier who insists he assaulted a passive Palestinian detainee.

The State Attorney’s Office said Wednesday they would consider whether fresh evidence justifies a second probe. The announcement was an implicit acknowledgement that authorities may have focused on the wrong incident in the first investigation, which was closed last week.

But the State Attorney’s Office also said it stood by its decision, and expressed continued skepticism about the account of the soldier, Dean Issacharoff.

At stake is the credibility of Breaking the Silence, a controversial human rights group for which Issacharoff is the spokesman. The group, which seeks to end Israel’s occupation in the West Bank by publishing critical testimonies by soldiers who served there and in the Gaza Strip, is often the target of criticism from politicians and is widely unpopular with the public.

The State Attorney’s office opened an investigation into Issacharoff after he went public with his story at a Breaking the Silence Rally in April. Now an officer in the reserves, Issacharoff recounted that during his mandatory army service he in 2014 arrested a Palestinian man during a stone throwing incident in the West Bank and kneed him repeatedly in the head without justification.

In September, police spoke to a Palestinian whom they said was the man Issacharoff claimed to have assaulted. The man acknowledged the arrest but denied being beaten. Based on this and other evidence, state prosecutors closed the probe Thursday, and concluded Issacharoff was lying about the event.

Israeli ministers welcomed the decision. Prime Minister Benjamin Netanyahu tweeted Thursday, “Breaking the Silence lies and slanders our soldiers internationally. Today, in case anyone had any doubt, this fact has received further proof. The truth wins.”

However, Issacharoff responded in a video posted to social media Friday by repeating his story and mocking the state’s investigation as a politically predetermined “farce. He dared authorities to look for the truth. The video also featured footage published Thursday of one of Issacharoff’s fellow soldiers confirming his account of the beating.

Other former members of Issacharoff’s platoon, including his then-commander, called him a liar in a video released in May by a group that works to counter Breaking the Silence.

Having earlier argued the Palestinian must have been afraid to speak honestly with police, Breaking the Silence on Saturday alleged that authorities had actually spoken to the wrong man. On Monday, the group released a video that shows Issacharoff in uniform leading a different Palestinian in handcuffs down a street in the West Bank city of Hebron, and said he was Issacharoff’s victim.

In a TV broadcast Tuesday, Israel’s Hadashot news tracked down and interviewed the Palestinian in the video, a Hebron resident named Faisal el-Natche. He confirmed he was beaten that day by a group of Israeli soldiers, but he could not say whether Issacharoff was among those responsible.

Issacharoff has said he acted alone.

On Wednesday, the State Attorney’s Office responded to the report. In an interview with Hadashot, spokeswoman Yael Litman said the office stood behind its decision to close the investigation of Issacharoff, whom she said had not cooperated with police and “refused to give even one name” of a soldier who could corroborate his account.

Litman also said Natche’s recollection of his beating to Hadashot “does not match the description given by Dean Issacharoff.” However, she said the State Attorney’s Office would weigh the “new information,” which “could lead to a new investigation,” according to Hadashot.

In another report Wednesday, Israel Hayom revealed that the Foreign Ministry had “instructed European representatives to act against Breaking the Silence and its spokesman” and demand government officials in their host countries cut off all funding to the group. According to the newspaper, the ministry told the diplomats that Breaking the Silence “is spreading lies against the State of Israel in order to promote a political agenda.”

As the newspaper noted, this puts Isscharoff’s father, Jeremy Issacharoff, in an awkward position as Israel’s ambassador to Germany. But according to Israel Hayom, Hotovely insisted that her ministry’s new policy is “not personal” and that she sees the elder Issacharoff as a “man of great values” who should be judged separately from his son.