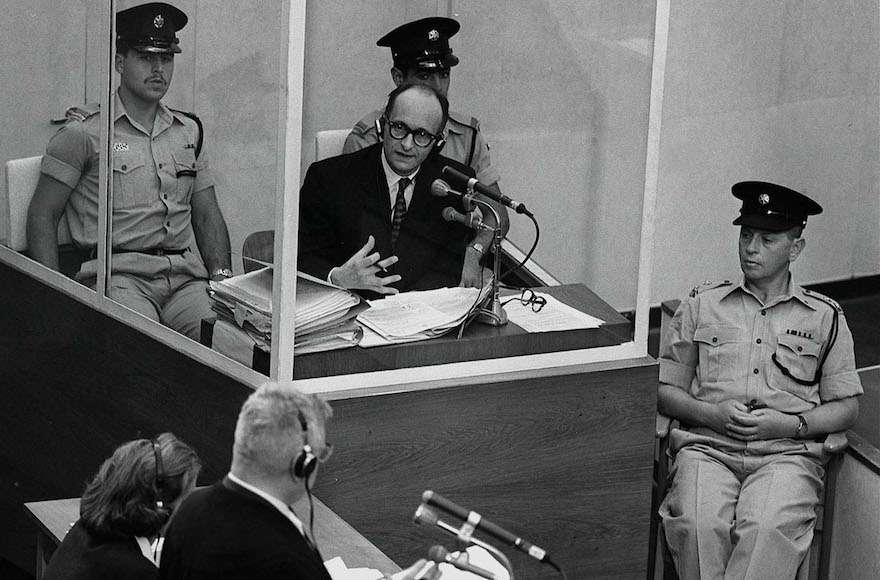 (JTA) — Argentina’s Jewish community gave Israel’s spy agency all the cars and some of the safe houses used to abduct the Nazi murderer Adolf Eichmann, a Mossad agent revealed.

Career Mossad agent Avner Avraham revealed this earlier this month, ending decades of official secrecy around the exact role of the Jewish Community of Argentina in the operation Finale, in which Mossad agents flew Eichmann from Buenos Aires to Israel in 1960 to be tried for his role in murdering hundreds of thousands of Jews during the Holocaust, for which he hanged in 1962.

“The Jewish community helped. It’s not something we publish but the Jewish community certainly helped the Mossad with vehicles and also with safe houses,” Avraham said during a lecture he delivered earlier this month at the Mahar conference on Balkan Jews, which the Jewish community of Montenegro organized with help from the Euro-Asian Jewish Congress in the coastal city of Budva.

Efraim Zuroff, a leading hunter of Nazis for the Simon Wiesenthal Center, told JTA that, to his knowledge, the extent of the Jewish community’s involvement in Eichmann’s capture – an episode which led to the Israeli ambassador’s expulsion from Buenos Aires and a rupture in bilateral relations – had previously not been widely known.

“It was know that there was some involvement, but not exactly what,” he said.

Avraham in 2011 curated with permission from Mossad an exhibition on Eichmann’s capture – a watershed moment in Israel that many scholars identify as the episode that prompted open debate about the genocide in Israel, where it had been something of a taboo for its traumatic effects.

The exhibition, “Operation Finale: The Capture & Trial of Adolf Eichmann,” features a photograph of the car that was used to transport Eichmann to a safe house from the site of his abduction. The Mossad had three cars there that night.

Whereas a small number of Argentine Jews willingly helped Mossad (although they were not told exactly what the cars and safe houses were needed for, according to Avraham) as least one, Luba Volk, was used by the spy agency without her knowledge, the agent said.

The wife of an engineer who worked in an Argentine factory, Volk, who passed away, she was offered shortly before the abduction to head a regional office for Israel’s national airline, El Al, which was set up solely to handle the Nazi’s transportation to Israel. A stay-at-home mother of a three year old son, she happily accepted the offer from an El Al employee – who also didn’t know the real purpose of the new regional office.

She came under surveillance by local authorities after the abduction and there were fears that Nazis in Argentina might try to hurt her, so the Israeli foreign ministry advised her to leave with her husband, Aryeh Volk, who was fired following the Eichmann abduction, and their son for Uruguay.

“Unfortunately, and I’m very sorry to say this, the Mossad didn’t really take care of her,” Avraham said.