Holocaust survivor, 102, meets nephew he never knew he had 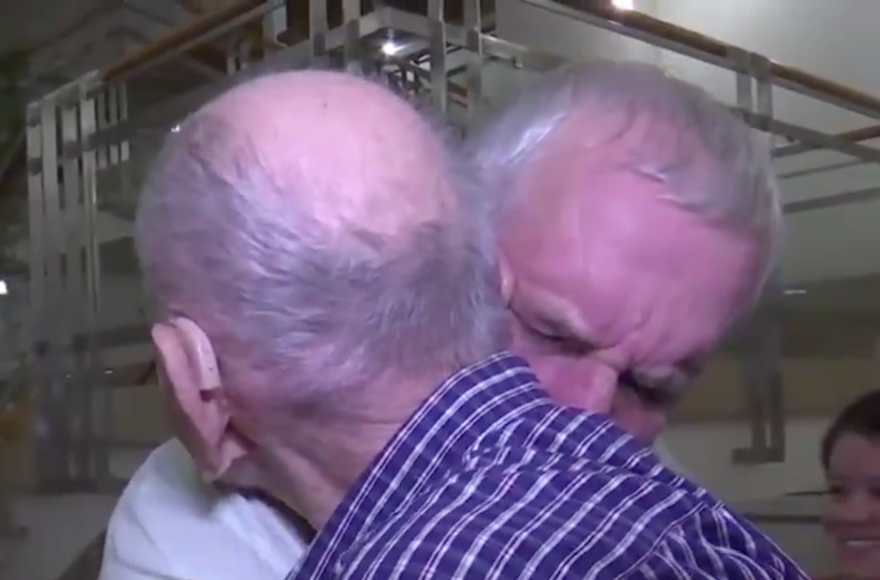 (JTA) — A 102-year-old Israeli Holocaust survivor who thought his brother had died in Russian gulag discovered he had also survived and met his brother’s son.

Eliahu Pietruszka met earlier this month in his retirement in Kfar Saba his nephew, Alexandre Pietruszka a 66-year-old who came for the meeting from Russia, the Associated Press reported.

Pietruszka, a retired microbiologist who fled Warsaw in 1939, kissed both cheeks of his visitor and in a frail, squeaky voice began blurting out greetings in Russian, a language he hadn’t spoken in decades.

He had thought his brother, Volf Pietruszka, who was the visitor’s father, had died in a labor camp after losing contact with him following the murder of their brother and parents in the Holocaust.

The emotional meeting was made possible by Israel’s Yad Vashem Holocaust memorial’s comprehensive online database of Holocaust victims, a genealogy tool that has reunited hundreds of long-lost relatives.

“It makes me so happy that at least one remnant remains from my brother, and that is his son,” said Pietruszka, tears welling in his eyes. “After so many years I have been granted the privilege to meet him.”

In 1939 Pietruszka left Warsaw, which was occupied by the Nazis, and fled to the Soviet Union, leaving behind his parents and twin brothers Volf and Zelig, who were both 15. Volf also managed to escape, whereas their parents and Zelig were murdered. The brothers briefly corresponded before Volf was sent by the Russians to a Siberian work camp, where Pietruszka assumed he had died.

But Volf had survived and settled in Magnitogorsk, an industrial city in the Ural Mountains. He died in 2011.

“In my heart, I thought he was no longer alive,” Pietruszka said. He married in Russia and, thinking he had no family left, immigrated to Israel, or made aliyah, in 1949 to start a new one.

Eliahu Pietruszka’s grandson, Shakhar Smorodinsky, received an email from a cousin in Canada who said she had uncovered a Yad Vashem page of testimony filled out in 2005 by Volf Pietruszka for his older brother Eliahu, who he thought had died.

Smorodinsky tracked down an address and reached out to discover that Volf. After Smorodinsky arranged a brief Skype chat, Alexandre decided to come see the uncle he never knew he had.