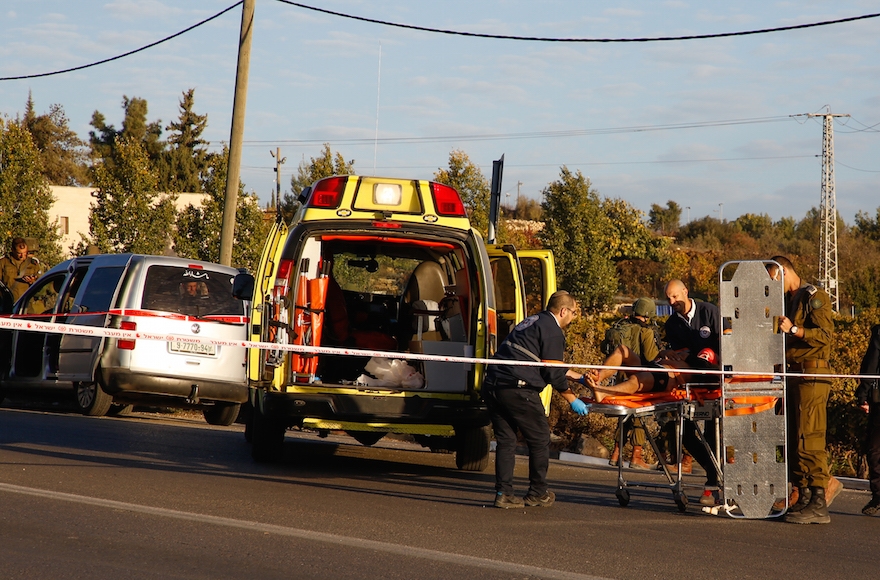 Israeli security and medical forces at the scene of a car-ramming and stabbing attack near Gush Etzion Junction in the West Bank, Nov. 17, 2017. (Gershon Elinson/Flash90)
Advertisement

JERUSALEM (JTA) — Earlier this month, 162 members of an Indian community immigrated to Israel. The next day, a member of that community already living in Israel was left in a coma after being injured in a car-ramming terror attack.

Even Ezer Holaring, 35, was standing at the Gush Etzion Junction in the southern West Bank on Nov. 17 when he was run down by a car driven by a Hebron Palestinian. The teen driver had already hit a 70-year-old man at a nearby junction.

After slamming into Holaring, the driver exited the car brandishing a knife and attempted to stab soldiers standing nearby.

More than a week later Holaring, a father of five children aged 2 to 12, remains in a coma following several brain surgeries.

While the Holarings wait anxiously for a recovery and insurance benefits to kick in, their surrounding communities — both Indian Israelis and other Israeli Jews — have given their money and time to ease the family’s burdens.

Holaring is a member of the Bnei Menashe community, which hails from northeast India and claims to be descended from the biblical tribe of Manasseh, one of the Ten Lost Tribes exiled from Israel more than 2,700 years ago. In 2005, Israel’s then-Chief Sephardic Rabbi Shlomo Amar endorsed the Bnei Menashe’s claim to Jewish ancestry, but required them to convert to Orthodox Judaism.

Some 3,000 Bnei Menashe have immigrated to Israel in recent years, with another 7,000 remaining in India waiting to immigrate.

Holaring and his wife, who live in Kiryat Arba in the West Bank, are teachers at Gush Etzion schools. The Gush Etzion Foundation and the Shavei Israel organization, which has worked to bring the Bnei Menashe to Israel, organized a fundraising campaign to help the family. The money raised has gone to help them purchase groceries and winter clothes.

In addition, volunteers from Kiryat Arba and Gush Etzion are shuttling family members to and from the hospital, helping with child care and providing hot meals. A local caterer offered to host and cover all the expenses for their son’s upcoming bar mitzvah. Another donor has stepped up to buy the bar mitzvah his first pair of tefillin — they can cost $1,000 — and cover the cost of the remaining tutoring sessions needed to help him learn his Torah portion.

Meanwhile, Holaring’s wife has called on the public to pray for his recovery, using the name Even Ezer ben Malka — or Even Ezer, the son of Malka. In Jewish tradition, the prayers for people in dire straits use their  Hebrew name and their mother’s name.

Holaring arrived in Israel in 2006 under the auspices of Shavei Israel. Michael Freund, the founder of the organization and a former aide to Prime Minister Benjamin Netanyahu, said he met the young man in India before he made it to Israel.

“We will do all we can to help him and his family,” Freund told The Times of Israel. “He has five small children and we are all praying for him.”