Linda Sarsour gets warm welcome at controversial panel on anti-Semitism 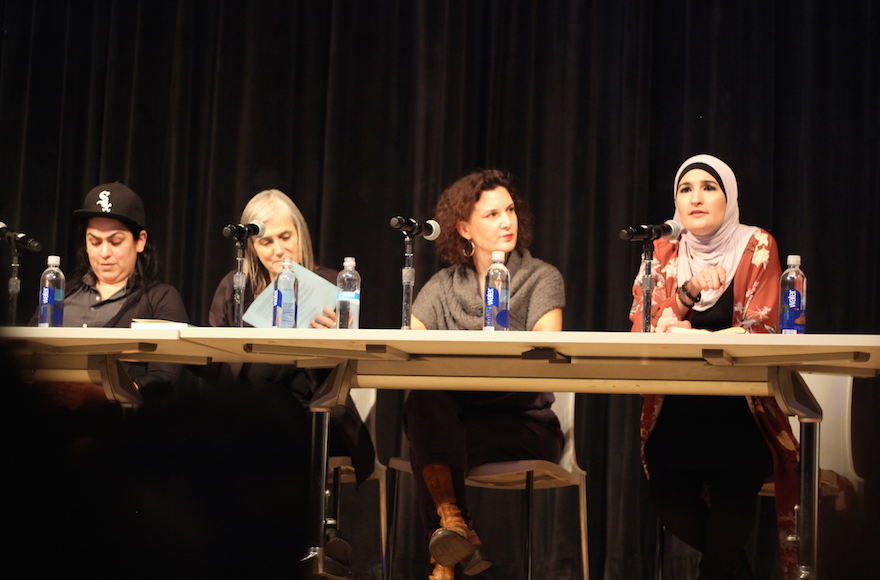 Linda Sarsour, far right, speaking about anti-Semitism at a panel at the New School. Other panelists, from left to right, include Lina Morales, Amy Goodman and Rebecca Vilkomerson, in New York, Nov. 28, 2017. (Courtesy of Jewish Voice for Peace)
Advertisement

NEW YORK (JTA) — Audience members greeted Palestinian-American activist Linda Sarsour with loud applause at an event here that in recent weeks became a rallying cry for both critics and defenders of Israel.

Sarsour, a leading feminist as well as pro-Palestinian advocate, was the best-known speaker on a panel on anti-Semitism held Tuesday at the New School. Billed as a discussion of anti-Semitism on the right and left, the panel was denounced by pro-Israel critics who have accused Sarsour and other panelists of anti-Semitism and charged that the event was meant to obscure the anti-Semitism they see lurking among far-left critics of Israel.

A crowd of 400 attended the panel, whose organizers included the New School’s journalism program, Jewish Voice for Peace, Haymarket Books, Jacobin Magazine and Jews for Racial & Economic Justice, or JFREJ.

Outside the auditorium in Lower Manhattan, 50 protesters gathered behind metal barricades waving Israeli flags. Among them were members of the far-right Jewish Defense League, once deemed a terrorist organization by the FBI.

Larger Jewish groups also weighed in as the event neared.

“These panelists know the issue, but unfortunately, from the perspective of fomenting it rather than fighting it,” the Anti-Defamation League’s national director, Jonathan Greenblatt,  wrote earlier this month.

The Zionist Organization of America called  Sarsour an “Israel-bashing, Jew-hater” in a statement denouncing the event.

Sarsour, who helped organize the Women’s March on Washington in January, has harshly criticized Israel, once tweeting that “Nothing is creepier than Zionism.” That led various Jewish groups on the center and right to label her anti-Semitic, and worry that she represents the mainstreaming of anti-Israel rhetoric on the left.

Tuesday’s panelists offered plenty of attacks on Israel while insisting that such views are being labeled anti-Semitic in order to silence criticism of the country and its policies.

Panelist Lina Morales, a member of the Jews of Color and Mizrahi/Sephardi Caucus of JFREJ, called Zionism “a mistake” that “has led us down a dangerous and horrible road,” while Rebecca Vilkomerson, executive director of the pro-BDS Jewish Voice for Peace, described the Israeli treatment of Palestinians as “apartheid.” 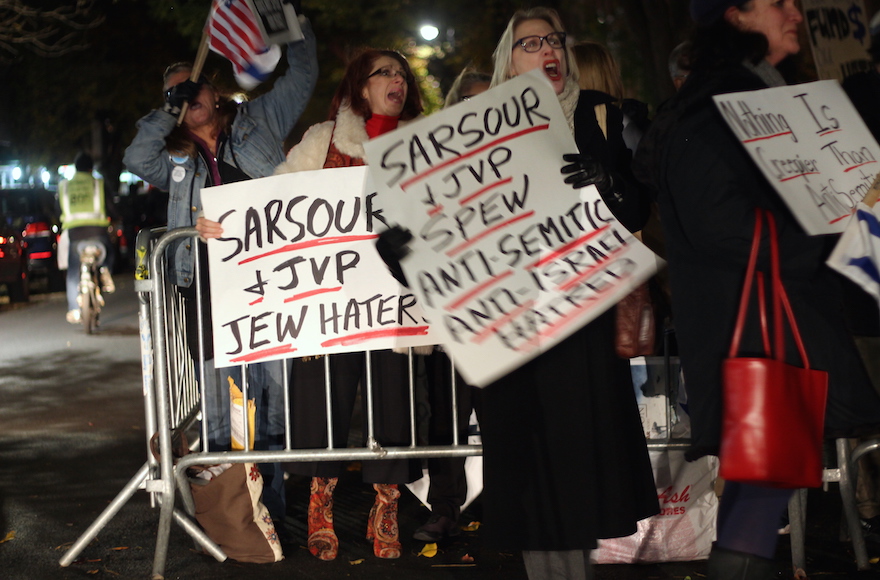 Protesters of the New School panel on anti-Semitism demonstrate outside the event. (Courtesy of Jewish Voice for Peace)

Asked by an audience member about an interview in which she seemed to have said Zionism and feminism were mutually exclusive, Sarsour said there was room for those with different opinions in the feminist movement.

“If you believe that you have to be part of a movement where you show up and agree with everybody, then this definitely ain’t the movement for you, because I don’t agree with half the people in the movement either,” she said.

Sarsour, however, also chastised pro-Israel activists who have demanded that progressives welcome them uncritically into their coalitions.

All the panelists spoke of the dangers of anti-Semitism and said they were committed to fighting it, but they focused on its manifestation on the right.

Some in the audience believed that emphasis was unfair.

“There was a lot of focus on white supremacism and Trump, which is totally valid, but I was hoping for a little bit more introspection and critique of some people in their own circles that are anti-Semitic,” said Uri Westrich, a 32-year-old filmmaker.

Asher Lovy, a 25-year-old working in online sales, said the panel had failed to address the types of anti-Semitism he had experienced on the left.

“I’d also like to see ideological purity tests on the left addressed as well, the idea that if you’re Jewish you have to affirmatively prove your anti-Zionist bona fides before you’re let into any leftist space regardless of the causes,” he said.

Meanwhile, Andrew Weitzner said Sarsour had adequately expressed concerns from critics, including the comment about anti-Semitism. It was the protesters outside, said the 33-year old paralegal, who were not participating in constructive dialogue.

“They’re screaming ‘Am Yisrael Chai’ outside and singing ‘Hatikvah’ — how is that a level of debate?” he asked, noting the words for “the people of Israel live” and the Israeli national anthem, respectively. “How is that an argument on both sides?”

One of the demonstrators said he was there to protest Sarsour’s views, which he saw as “anti-Semitic, anti-Israel, anti-America.”

“She knows how to get the crowd going on her side, but she’s not promoting peace and unity at all and coexistences between the Israelis and the so-called Palestinians, or Jews and Muslims, or even fellow Americans,” said Ariel Kohane, 46, a kosher food supervisor sporting a kippah with a picture of President Donald Trump. “She’s actually brainwashing these college kids.”

Inside the auditorium, audience members cheered and clapped many times throughout the speeches. Despite the enthusiasm in the room, many audience members did not want to be interviewed or would not agree to use their full names.

When asked why, one man simply pointed to his shirt, which featured the name of an Orthodox rabbinical school.