The NY Times Nazi lost his job. Now he’s getting money from a site called GoyFundMe. 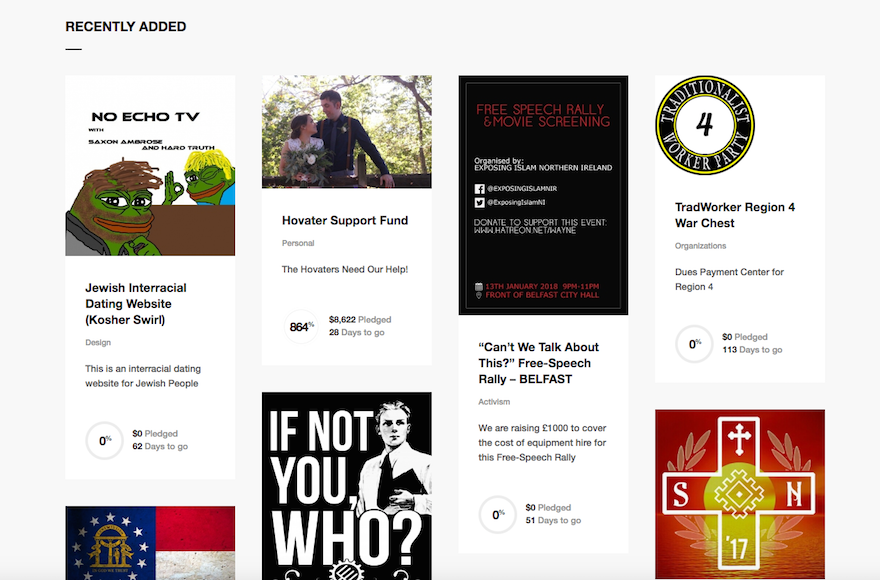 (JTA) — Feel like The New York Times was too soft on Tony Hovater, the Nazi sympathizer with good manners and arched eyebrows?

If so, you might be pleased to learn that in the aftermath of The Times article, Hovater and his wife were fired from their restaurant jobs this week. The newlyweds will also be moving out of their house in New Carlisle, Ohio, for safety and financial reasons.

“It’s not for the best to stay in a place that is now public information,” Hovater told the Washington Post on Thursday.

The Hovaters’ extreme views may have cost them their income — but they are hardly broke. The couple’s white supremacist friends have launched a fundraising campaign on a crowdfunding site called GoyFundMe, which riffs off the popular fundraising website GoFundMe.

Hovater, 29, is a co-founder of the Traditionalist Worker Party, a neo-Nazi group that protested at the white supremacist rally in Charlottesville, Virginia, in August. The Times profile published Saturday called him “a committed foot soldier” of the far right and noted his extremist views, from advocating white supremacy to denying the Holocaust.

A chorus of critics, though, called out the article for appearing to normalize Hovater and not pushing back on his views. The profile portrayed Hovater as the “alt-right” version of a hip millennial, with “Midwestern manners [that] would please anyone’s mother.” Notably the article did not challenge his claim that Hitler was “chill” when it came to the question of exterminating the Jews.

In a response to the critics, a Times editor regretted the offense caused by the piece but defended the need to “shed more light, not less, on the most extreme corners of American life.”

The supporters’ fundraising campaign is known as the Hovater Support Fund. Its page blames “Communists, Antifa and general basement-dwelling ne’er-do-wells” for getting the Hovaters fired, and asks for donations in the spirit of Christmas.

As it happens, the campaign appears to be among the tamest campaigns on GoyFundMe, which employs  the sometimes pejorative word “goy” — which means “nation” in Hebrew but commonly refers derogatorily to non-Jews. White supremacists on the internet have taken recently to re-appropriating the term.

GoyFundMe bills itself as part of the “alt-tech” community, a group of social media sites for the alt-right that do not censor white supremacist content.

“If you, like us, find that shutting down accounts and refusing service to anyone simply because their ideas are different or unpopular, we invite you to check the following websites and lend them your support if you can,” GoyFundMe’s description of alt-tech reads. “Doing so will help to ensure the continued rise of Alt-Tech companies, as well as to keep free speech and a true diversity of ideas alive and well on the web.”

A few campaigns on GoyFundMe, which launched in late August, aim to raise money for those arrested during the Charlottesville rally. One “Defense Fund” features icons of Nazi-style eagles and declares “We won the battle. Now let’s win the war.”

Another is called Republic of Florida Needs Shekels, which seeks to raise $5,000 to finance a militia. The campaign includes a video of people wearing storm trooper helmets (think Nazi, not “Star Wars”). It has raised $20.

But perhaps the most bizarre campaign is one to launch a “Jewish Interracial Dating Website” called Kosher Swirl. The campaign’s creators hope to raise $10,000, claiming that they “are trying to give back to Jews by creating an interracial dating site” — one that won’t allow white people to join.