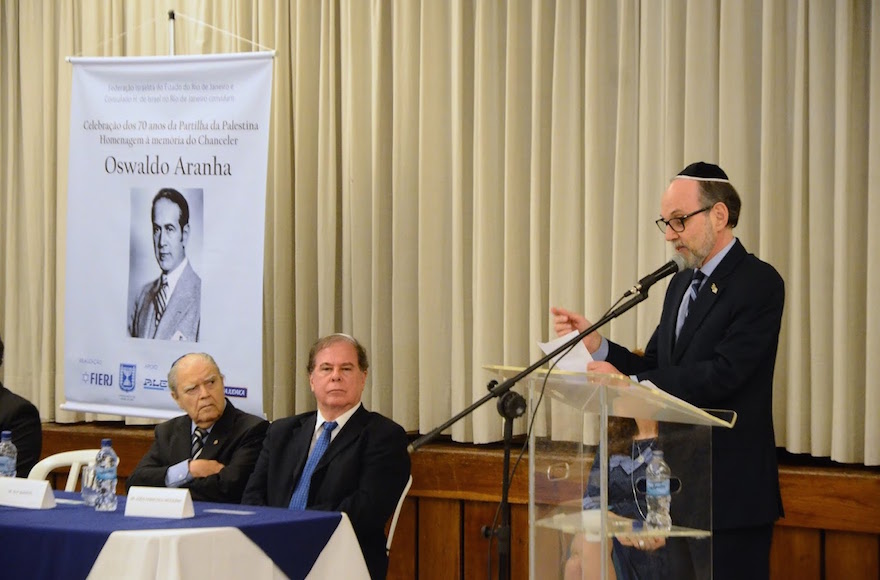 RIO DE JANEIRO (JTA) — A Brazilian diplomat who played a crucial role in the creation of the State of Israel 70 years ago was remembered in his country at several ceremonies.

Oswaldo Aranha as president of the U.N. General Assembly presided over the vote held on Nov. 29, 1947, and heavily lobbied for the majority in favor of the resolution that partitioned the British Mandate of Palestine into two states, Jewish and Arab. For his efforts, he was nominated for the Nobel Peace Prize in 1948.

“We are very proud that it was a Brazilian in that role,” said Herry Rosenberg, the president of the Rio Jewish federation, at a ceremony Wednesday at Rio’s largest synagogue, the 1,000-family Reform temple ARI. “We honor the memorable chancellor Aranha for having allowed the Jewish people to make our millennial dream come true.”

On the same day, a Jewish group joined Aranha’s family for a tribute at his grave in a Catholic cemetery.

“Oswaldo Aranha is regarded by the Jewish people as the great craftsman of the fulfillment of our millennial dream of 2,000 years: The State of Israel,” Israel’s honorary consul, Osias Wurman, told JTA. “Abba Eban, Israel’s first chancellor, once said a very special chapter should be dedicated to Aranha in a book to tell the history of Israel.”

Israel’s ambassador to Brazil, Yossi Shelley, was among those on hand Tuesday for a ceremony in Porto Alegre, the capital city of Rio Grande do Sul state, where Aranha was born in 1894.

“Israel is a strong nation. We must continue our efforts to bring both Israel and Brazil together even more,” he said.

State Governor Jose Ivo Sartori said that Israel is the result of the struggle and the capacity of the whole Jewish people to be united as one.

“Israel is a modern nation, but it never loses its origins,” he said. “At this transitional moment our country is going through, the support of this country, which has experienced so many adversities, motivates us to remain firm and strong and looking forward to the future.”

By presiding over the first special session of the General Assembly, Aranha, then head of the Brazilian delegation, began a tradition that has remained until today in which the first speaker at the international forum is a Brazilian.

Several thousand Jews from Europe were granted visas to Brazil during Aranha’s time as minister for external relations from 1938 to 1944. However, some historians have argued recently that Aranha was aware of secret pamphlets circulating asking that Jews be denied entry visas to Brazil and did little to change the situation.

Albert Einstein asked Aranha for help in obtaining a visa for his German-Jewish friend Helene Fabian-Katz to join her brother in Sao Paulo. Einstein had appealed to the U.S. government for help, but the United States denied the visa.

Aranha served as ambassador to the United States in 1934. A square in Jerusalem and streets in several Israeli cities are named for him.