Israel’s only liberal arts college has a Zionist mission 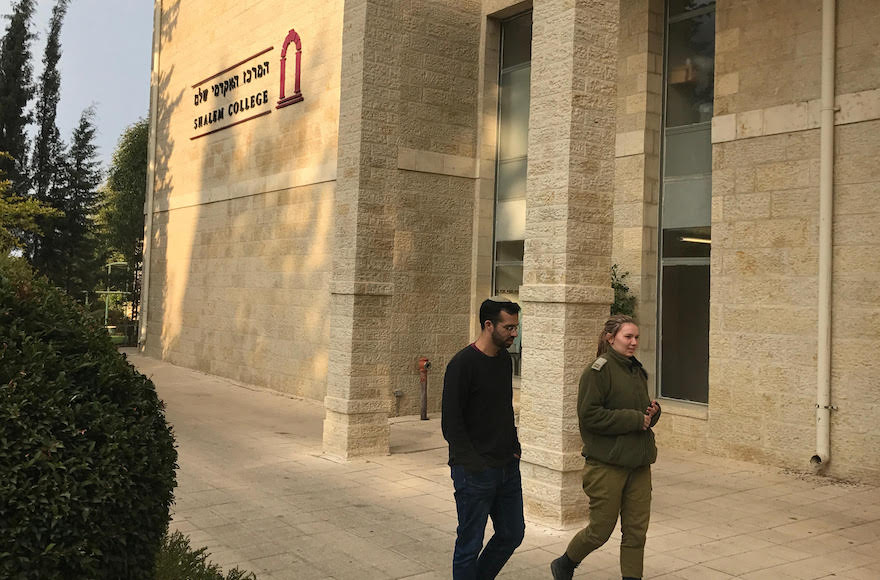 JERUSALEM (JTA) – From the rooftop of Shalem College, students have a sweeping view of the Old City of Jerusalem. The golden-topped Dome of the Rock, an Islamic shrine, sits atop the Temple Mount, where the ancient Jewish temple once stood.

Downstairs in their classrooms, students study the mount from a variety of perspectives. They discuss the clashing Jewish and Muslim claims to the holy site, of course. But they also examine the intra-Jewish disagreements over its significance of which get at fundamental questions about the very purpose of Zionism.

The leaders of Shalem, Israel’s first liberal arts college, are betting that a broad course of study will help students — and ultimately Israel itself — make sense of the Jewish national project. While a liberal arts education, with its universal, humanist approach, might seem at odds with Zionism, they say they are drawing on the best of both traditions.

“You want to educate students to, on the one hand, have a commitment to their nation, and at the same time have a very powerful commitment to the truth and to the very best of what the academic world can offer,” said Daniel Polisar, Shalem’s American-born co-founder and executive vice president. “And far from being in contradiction, serving your nation and having a profound passion for the truth fit together.”

Shalem opened in 2013 in a two-story limestone and glass building on a leafy campus in southeastern Jerusalem. What makes it unique is its large, humanities-rich core curriculum spanning four years. Most of Israel’s 60-plus universities and colleges offer three-year specialized degrees, often with a professional focus.

Shalem is also one of the few Israeli institutions of higher education with an explicitly Zionist mission. In addition to teaching the Western greats, from Plato to John Stuart Mill, the college makes sure students understand their Jewish heritage. That means both being familiar with the poetry of Jewish national poet Hayim Nahman Bialik and getting his biblical references. Acknowledging Israel’s geography, Shalem also emphasizes Islamic history and thought.

“How Jewish should this country be, and how should it be Jewish? Those are really important questions,” said Daniel Gordis, an American-Israeli rabbi and author and Shalem’s senior vice president. “I think that what Shalem affords Israel is a place where some of its most talented students can sit around and read great books, encounter profound ideas and have that exact conversation. Where else in the country is that happening?”

Alissa Symon, a 25-year-old religious Zionist from Jerusalem and Shalem senior, said she has encountered a diversity of political and religious views among the faculty and students. Whether in class or over weekly Shabbat dinners, she said, “There is a very high level of academic discussion here, and it goes way beyond the usual political debate.”

Symon has also grappled with critical and anti-Zionist perspectives at Shalem. As part of her Middle Eastern and Islamic studies major, she has read works by the likes of Palestinian-American author Edward Said and Israel’s New Historians, a loosely defined group that has punctured the standard narrative about Israeli innocence and infallibility in its founding years.

Through an intensive Arabic program, Symon said she is “gaining fluency” in the language. She said she speaks frankly about politics with her Arabic instructors, who include Arab Israelis and Palestinians.

However, Symon has not had the opportunity to speak with Arab students at Shalem because the college has yet to admit any. Aside from the handful of Arabic instructors, Shalem’s only non-Jewish faculty member is a Druze Middle Eastern Studies scholar, Yusri Hazran. 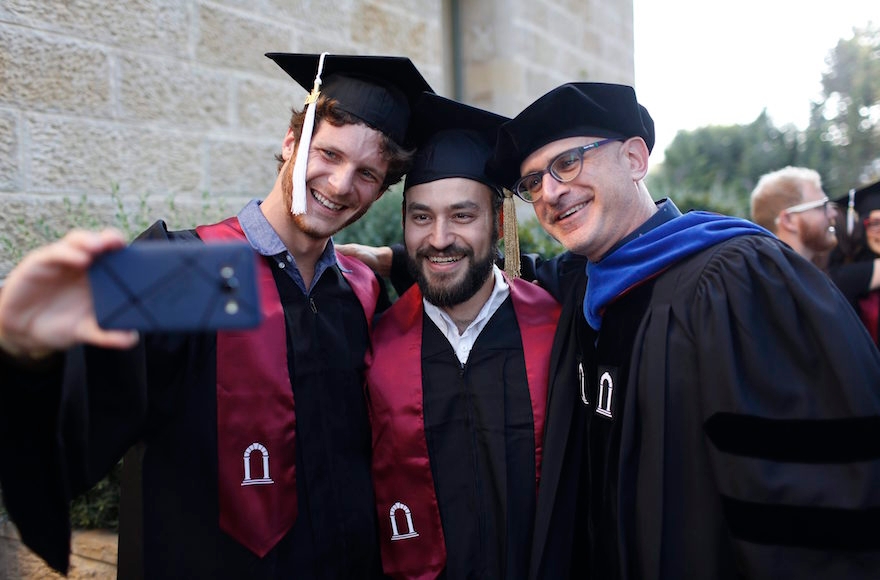 Shalem’s leaders said they were actively recruiting more faculty and students from Israel’s Arab community, which accounts for about a fifth of the country’s population. They dismissed the suggestion that the college’s Zionist identity was a barrier. Rather, they explained, young Arab Israelis tend to be less interested in liberal arts education and less qualified to meet Shalem’s high admission standards than their Jewish counterparts.

At the same time, no one denies that Shalem has roots in Israel’s right wing. The college emerged from the Shalem Center, a conservative-leaning think tank founded in 1994 by a group of American Jewish Ivy Leaguers. Its stated objective was “strengthening the Jewish people and Israel by developing the ideas needed to sustain Judaism and a Jewish state.”

In 2000, the Shalem Center’s founding director, Yoram Hazony, argued in a book that the New Historians were sapping Israeli morale and that Israel’s schools were ”dejudaizing” their curricula in favor of “purely universal values.”

Shalem College rents its building and other classrooms on a campus owned by The Jewish Agency, Israel’s promoter of Jewish immigration. The site is part of what was a no man’s land between Israel and Jordan until the 1967 Six-Day War. On Shalem’s website, an illustration of a map of Israel includes, without delineation, territories the country captured in that war and to varying degrees still controls despite Arab and international protestations: eastern Jerusalem, the West Bank, the Gaza Strip and the Golan Heights.

Polisar said Shalem’s location and online map do not reflect an ideological agenda. He and Shalem’s other leaders said the college had shed the politics of the Shalem Center other than a commitment to Zionism, broadly defined. Two faculty members, speaking anonymously, said that as political liberals they felt entirely at home at Shalem.

Israel Bartal, a former dean of The Hebrew University of Jerusalem’s humanities faculty and a professor emeritus of history, affirmed that Shalem had straightened its political slant. Otherwise, he said, the college would not have survived long.

“Young Israelis are sophisticated and politically engaged, much more so than I’ve seen in other countries, and if somebody tries to preach to them, it just won’t work,” he said. At this point, Bartal added, “I think Shalem is really strengthening the level and quality of the humanities in this country.”

Nir Levenberg, a 29-year-old a junior at Shalem who is majoring in philosophy and Jewish thought, described himself as a secular leftist and said his views were well represented on campus. Ahead of Israel’s 2015 election, he noted, the center-left Zionist Union had won a mock vote by the student body.

On the other hand, cautioned Levenberg, who is from a village near Tel Aviv, left-wing politics are not the same in Israel and the United States. He was struck by the contrast last year when he joined a Shalem delegation that traveled to San Francisco to meet with local Jewish groups, including the University of California, Berkeley, chapter of Jewish Voice for Peace, which supports the Boycott Divestment and Sanctions movement against Israel.

Levenberg said he knows of no one at Shalem who holds such views.

“Maybe it’s because I’m Israeli, but I think it’s OK to have a certain identity and to be yourself,” he said. “I can accept everyone in the public sphere, but that doesn’t mean I lose myself. We can agree to disagree.”

Polisar, Shalem’s executive vice president, said tension between the universal and the particular isn’t unique to a Zionist institution — it has been part of liberal arts education from the start. He pointed out that the Greeks came up with the model not just to broaden young people’s thinking, but to prepare them to participate in civic life. It was later tailored to the specific social needs of the Romans, the British and even the Americans, Polisar said, including at his alma matter, Princeton University.

“Our unofficial slogan was ‘Princeton in the nation’s service,'” he recalled, though Princeton added the words “and the service of humanity” in 2016.

Assaf Inbari, an Israeli writer who teaches a core course on modern Jewish literature at Shalem, said Shalem’s approach to education is also a throwback to early Zionism. Many of the founding fathers, he noted, were writers who read widely, spoke multiple languages and were comfortable in both traditional Jewish and modern European culture.

Israel lost much of that sophistication as it toiled to make the “miracle” of a Jewish state a reality, Inbari said, but young Israelis are now eager to reclaim it.

“So many young Israelis are hungry for humanistic education,” he said. “They want the real thing. They want whole-grain bread. They want intellectual nutrition.”