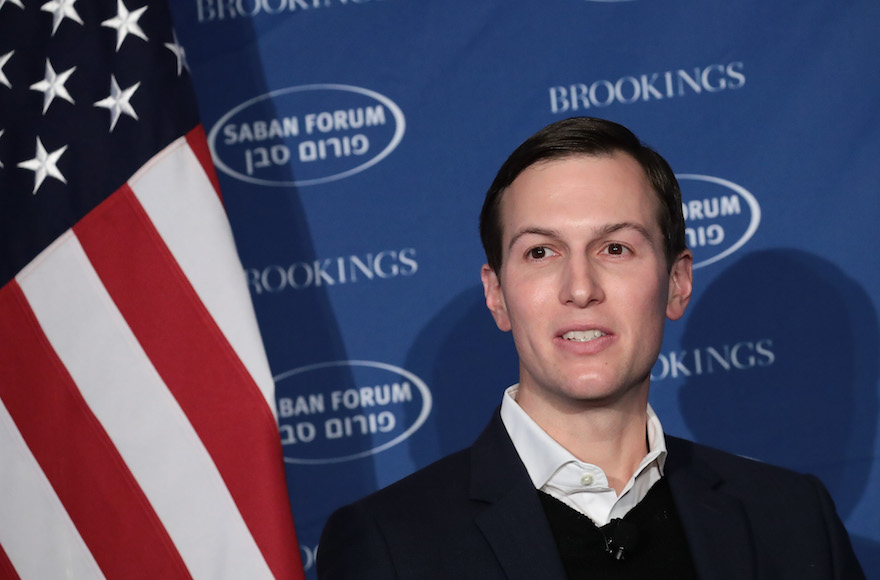 WASHINGTON (JTA) — Achieving peace between Israel and the Palestinians is a prerequisite for regional stability, Jared Kushner said, signaling that the Trump peace negotiating team is hewing to conventional notions of how to arrive at a deal.

Kushner, speaking Sunday at the annual Saban Forum convening Israeli and U.S. policymakers, scholars and influencers, outlined the challenges his father-in-law, President Donald Trump, faces in the Middle East, including Iran’s nuclear ambitions and its disruptive behavior and the proliferation of terrorism.

“You have the Israeli-Palestinian issue,” Kushner, who is a senior adviser to Trump and the most senior official handling Israeli-Palestinian peace, said. “If we’re going to try and create more stability in the region as a whole you have to solve this issue.”

Achieving Israeli-Palestinian peace as a prerequisite to advancing broader agendas has been a feature of successive U.S. administrations for at least 50 years, and Kushner’s remarks suggested that Trump’s ambitions, for all of the president’s talk of breaking with the past, were not so distant from his predecessors.

Kushner also abjured an incremental approach to reaching an agreement, preferring to solve the “big issue” first — another area of potential disagreement with Israel, where the tendency is to favor managing tensions with the Palestinians as opposed to resolving them.

“We’ve been very focused on the deal,” he said. “If you solve the bigger issues a lot of the little issues — or not little issues, because they’re all very serious issues — will be mitigated over time.”

Kushner also thanked the room for sending his negotiating team policy proposals, which also was notable as a nod to the Washington “swamp” that Trump has claimed he hopes to “drain.” The Saban Forum, funded by Israeli-American entertainment mogul Haim Saban, who interviewed Kushner, is organized by the Brookings Institution, a liberal-leaning think tank, and brings together mandarins of the U.S., Israeli and Middle Eastern foreign policy establishments, some of whom have been plying their trade for decades.

“That’s been so helpful to us, developing the ideas,” Kushner.

Kushner was cagey about details, resisting Saban’s pleas to confirm whether Trump would on Wednesday recognize Jerusalem as Israel’s capital, as has been reported in the media. He did offer one substantive departure from past efforts at getting to a peace deal — absolutely no deadlines.

“We’ve been very deliberate about not setting time frames so we have more room to be successful,” he said.

He also acknowledged the unusual composition of the team. His past was in real estate and Jason Greenblatt, the top negotiator, and David Friedman, the U.S. ambassador to Israel, are formerly lawyers for Trump. The only member with deep experience in the region is Dina Powell, a member of the national security council, whom he credited with working out a long-term plan.

“Her family is Egyptian, she speaks Arabic, she’s been very instrumental in helping us develop a regional aspirational economic plan for what could happen post-peace,” Kushner said.

“We don’t view a peace agreement just as signing a piece of paper and then hoping everything works out, we’re focused on what happens after,” Kushner said. “How do you create an environment where ten years down the road the people who are the beneficiaries of peace, have jobs and opportunity that they didn’t have before.”

Playing along with a theme introduced by Saban, Kushner joked about the team’s religious and ethnic makeup. “As this process has gone through, my team in particular, being three Orthodox Jews and a Coptic Egyptian, has tried very hard to do a lot of listening,” he said.

Saban, unusually, opened by referring to Kushner’s legal troubles; he has been named as directing Michael Flynn, a top security adviser to Trump’s transition team, to try to scuttle Obama’s plans to allow through a U.N. Security Council resolution condemning Israel’s settlement policies. Flynn on Friday pleaded guilty to lying to federal agents about a call he made a year ago to the Russian ambassador at what he claims was the behest of Kushner. Neither Kushner nor his lawyers have confirmed that he delivered the instructions.

Saban then thanked Kushner for allegedly trying to intervene on Israel’s behalf.

“I personally want to thank you,” Saban said.

“You and your team were taking steps to try and get the United Nations Security Council to not go along with what ended up being an abstention by the U.S.,” he continued. “As far as I know there’s nothing illegal there, but I think that that this crowd and myself want to thank you for making that effort, so thank you very much.”

Kushner muttered, “Thank you,” as the crowd delivered muted applause.

Kushner at the end of the exchange tamped down speculation that he was overwhelmed by legal troubles or the vast portfolio of responsibilities he has. In addition to Middle East peace, he also runs the Office for Innovation and is tackling the opioid crisis, and there have been reports that Trump wants him and his daughter, Ivanka, back in New York as early as next month.

“The kids are loving it here,” Kushner said. “The schools are great.”