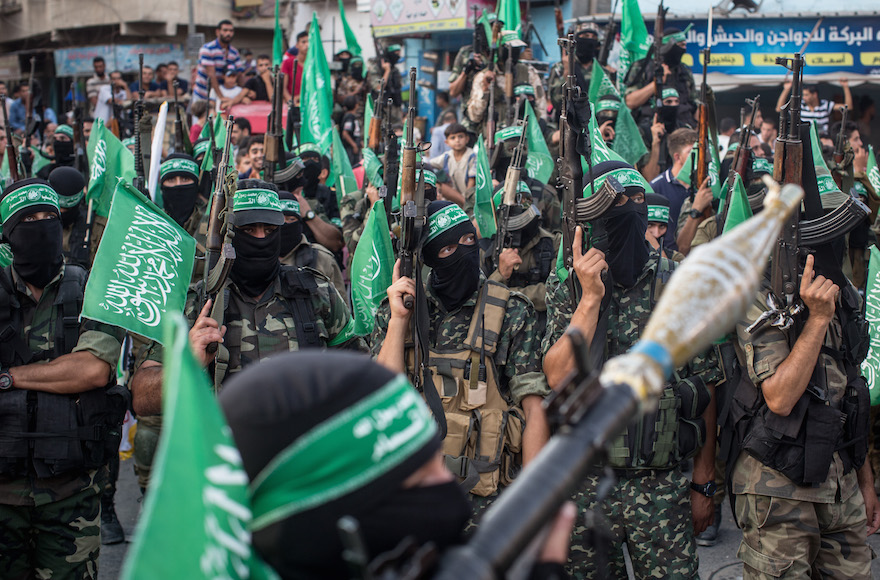 JERUSALEM (JTA) — As Israeli leaders praised President Donald Trump for his decision to officially recognize Jerusalem as Israel’s capital, a spokesman for the terrorist group Hamas said it “opens the gates of hell.”

“Trump’s decision on Jerusalem will not succeed in changing the fact that Jerusalem is an Arab Muslim land,” the spokesman said Wednesday following the White House announcement by Trump. Hamas also called for a Palestinian “Day of Rage” on Friday.

Prior to the announcement, Palestinians held a mass rally in Gaza that included the burning of Israeli and American flags.

President Reuven Rivlin was among the Israel leaders to laud the move.

“There is no more fitting or beautiful gift, as we approach 70 years of the State of Israel’s independence,” he said in a statement.

Naftali Bennett, head of the pro-settler Jewish Home party and the country’s education minister, wished Trump a “mazel tov” and praised him for not caving to “huge pressures from within.” He also thanked Trump and “the great people of the United States.”

Yair Lapid, the centrist Yesh Atid party chief, praised Trump’s “historic” speech in a statement posted on Facebook and said that “Jerusalem always was and will remain our capital. We look forward to welcoming the U.S. Embassy to Jerusalem.”

Lapid added that threats of violence should not dictate policy, and that “whoever surrenders to violence just encourages terrorism.”

Labor Party head Avi Gabbay also posted a statement on Facebook, saying “When my parents in Morocco dreamed of moving to Israel, they didn’t first check the Jerusalem page on the website of the U.S. State Department. Jerusalem is a symbol for the Jewish people for thousands of years. It’s more than my capital, it is home to me. It’s where my brothers and sisters and I grew up. After 70 years of the existence of the State of Israel, I am happy that our most important ally, the United States, now also recognizes Jerusalem as our capital.”

Deputy Foreign Minister Tzipi Hotovely called on other countries around the world to follow the U.S. lead and hoped the decision “is opening a new chapter of the international community recognizing Jerusalem.”

Dissent came from the left and Palestinian groups.

Palestinian Authority President Mahmoud Abbas in televised remarks following Trump’s announcement called it “a declaration of withdrawal from the role it has played in the peace process.”

He called the decision “reward to Israel for denying agreements and defying international legitimacy and encourages it to continue the policy of occupation, settlement, apartheid and ethnic cleansing.” He added that the Palestinian leadership will meet in the coming days and consult with Arab leaders to formulate a response.

The Palestinians’ chief peace negotiator, Saeb Erekat, said the announcement has “disqualified the United States of America to play any role in any peace process.”

The Israeli human rights group B’Tselem in a statement noted that while Trump announced that he recognizes Jerusalem as the capital of Israel, “Israel has never recognized Jerusalem’s Palestinian residents – the people whose land the state annexed unilaterally and unlawfully.”

“No unilateral announcement or embassy relocation can change the fact that wide areas of the city – on which hundreds of thousands of Palestinians who are deprived of political rights live – are occupied. This is the reality that must change,” B’Tselem said.

Arab-Israeli lawmaker Haneen Zoabi criticized the announcement and vowed to continue to fight for the Palestinians.

“Jerusalem is the capital of the Palestinian state, and we’ll continue fighting for that,” Zoabi said. “It’s important to note that with this irregular move, the U.S. has declared its own irrelevancy as mediator.”

Meanwhile, the Patriarchs and Heads of Churches in Jerusalem, representing an array of Christian movements, were critical.

“We have been following, with concern, the reports about the possibility of changing how the United States understands and deals with the status of Jerusalem,” read a joint letter. “We are certain that such steps will yield increased hatred, conflict, violence and suffering in Jerusalem and the Holy Land, moving us farther from the goal of unity and deeper toward destructive division. We ask from you Mr. President to help us all walk towards more love and a definitive peace, which cannot be reached without Jerusalem being for all.”