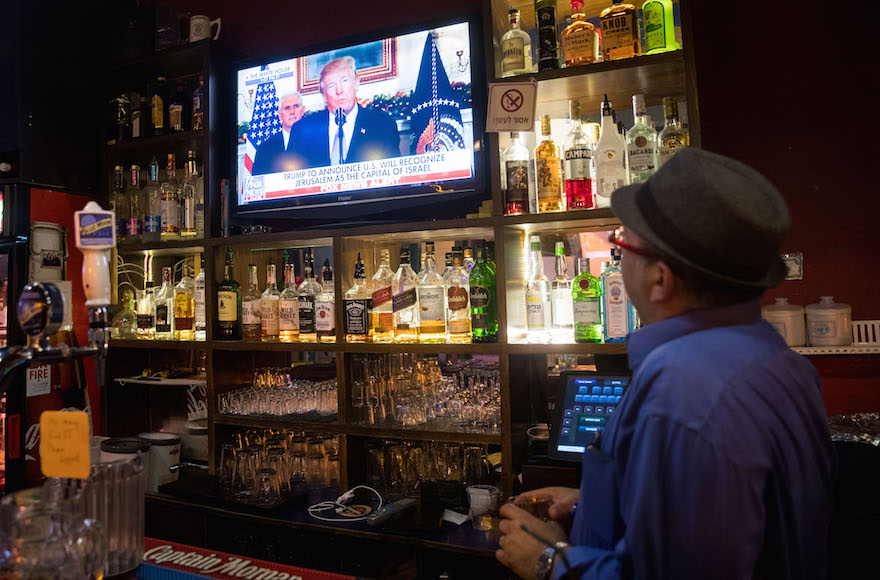 (JTA) — President Donald Trump’s recognition of Jerusalem as the capital of Israel and his announcement that he will move the embassy there from Tel Aviv will have a number of consequences for Israelis, Palestinians and the wider region.

For Israel, it has finally received from an American president what it has long craved, which is righting the historic wrong of it being the only state whose self-declared capital is not recognized by the rest of the world.

Israel’s government institutions are primarily in West Jerusalem in undisputed territory, and by formally recognizing this fact, Trump acknowledged what has been obvious to Israelis since the founding of the state 70 years ago. In using language that was not qualified and declaring “Jerusalem” to be the capital, some Israelis may interpret this to constitute an endorsement of Israeli claims to the entirety of the city, even though Trump explicitly ruled out this announcement as prejudging final status issues or the specific borders of Israeli sovereignty in the city.

Nevertheless, even a more appropriate interpretation that the U.S. has recognized only the undisputed sections of Jerusalem as Israel’s capital is an enormously positive development for the Israeli government, and it will have cause to celebrate.

For the Palestinians, Trump’s qualifier that his announcement does not prejudice final status issues and the president’s extolling of the importance of peace will not eliminate the bitterness of this pill. Trump’s lack of an explicit endorsement of an equal Palestinian claim to part of the city will be seen as a reversal of longstanding American policy and make it far more difficult for Palestinian Authority President Mahmoud Abbas to continue to engage with Trump’s emerging peace initiative. It will adversely affect Palestinian cooperation with the U.S. and Israel going forward, and is likely to lead to protests and violence.

While nothing that Trump said Wednesday has actually changed the situation on the ground, for the Palestinians this is an extremely significant symbolic loss.

Today’s announcement will also make it more difficult for Sunni Arab states to be seen as publicly backing a Trump peace initiative, as Jerusalem remains one of the most sensitive issues among Arab publics. Serving as boosters for the Trump peace plan or being seen as heading toward normalization with Israel following this announcement will put Arab governments in a political bind, and despite the president’s prediction that this move will make a peace agreement easier, the opposite is likely to be the case. Public opinion serves as a heavy brake even in authoritarian states, and while the importance of the Israeli-Palestinian conflict has subsided for many Arabs in recent years, any changes in Jerusalem’s status quo have the ability to reverse that trend given the unique sensitivity surrounding the city.

While the Trump announcement will change nothing on the ground itself, as Israel’s capital was Jerusalem even before Trump acknowledged it and moving the embassy will take years, the symbolism should not be understated. In declaring Jerusalem as Israel’s capital without making a clear statement that the U.S. does not recognize unhindered Israeli sovereignty in eastern Jerusalem, Trump may end up killing his own peace initiative in the cradle for the sake of an announcement whose timing was unnecessary now.