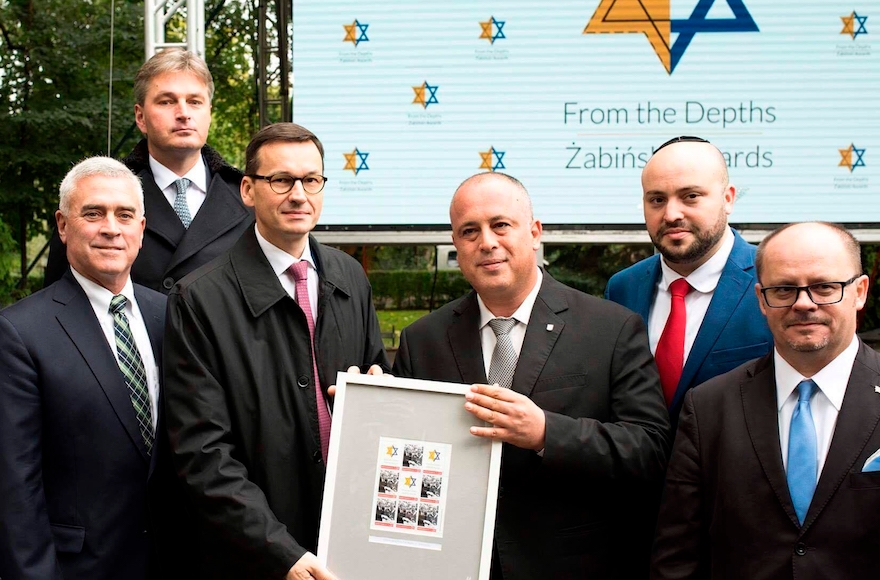 Mateusz Morawiecki. third from left, at the Warsaw Zoo holding a document honoring rescuers of Jews, Sept. 18, 2017. (Courtesy of From the Depths)
Advertisement

(JTA) — A politician with Jewish roots who said that both of his aunts were rescued by non-Jews during the Holocaust was appointed the country’s prime minister amid a Cabinet reshuffle.

Finance Minister Mateusz Morawiecki, a former bank chairman in the Santander Group, was tapped Thursday to take charge of the Polish government as it gears up for parliamentary elections in 2019, the ruling Law and Justice party announced. He succeeds Beata Maria Szydło, also of the right-wing party, who has served in the post since 2015.

Morawiecki, 49, who was not even a member of Law and Justice two years ago, joined the government as minister for economic development in 2015 before adding the post of finance minister last year.

His Jewish roots were known in Poland. Morawiecki spoke about it in some detail earlier this year at a ceremony at the Warsaw Zoo honoring a former zoo director and his wife, Jan and Antonina Żabiński, who saved hundreds of Jews there, and other rescuers.

“Always at such ceremonies I begin reflecting on my family’s own story,” Morawiecki said. “My aunt Irena was a Jew, she survived the war and as a child of 10. Until she was 16, she stayed with a Polish family who rescued her” with help from a few dozen other non-Jewish Poles who risked their lives to hide her, he said.

Another aunt, named Roma, now lives in Israel, he said. She survived the Holocaust because she escaped eastward, Morawiecki said, presumably to Russian-held territories, while the rest of her family died.

Morawiecki later said at least one of the aunts was a blood relation, according to Jonny Daniels, founder of From the Depths, the commemoration group that organized the zoo ceremony. Roma’s relative were murdered by “Nazis or communists,” Daniels said.

Unlike the Nazis, communist fighters during the 1940s did not search systematically for Jews to kill them.

In Eastern and Central Europe, where many people have bitter memories of Russian domination, nationalist politician often make equations between Nazism and communism.

Morawiecki said that none of the people who helped Irena had been recognized as Righteous Among the Nations – a title that Israel bestows on non-Jews who risked their lives to save Jews during the Holocaust. Poland in reality had “10 times” the number of Righteous recognized, which Morawiecki said was 7,000 but in reality is 6,706.