The Reform movement is alive with the sound of music 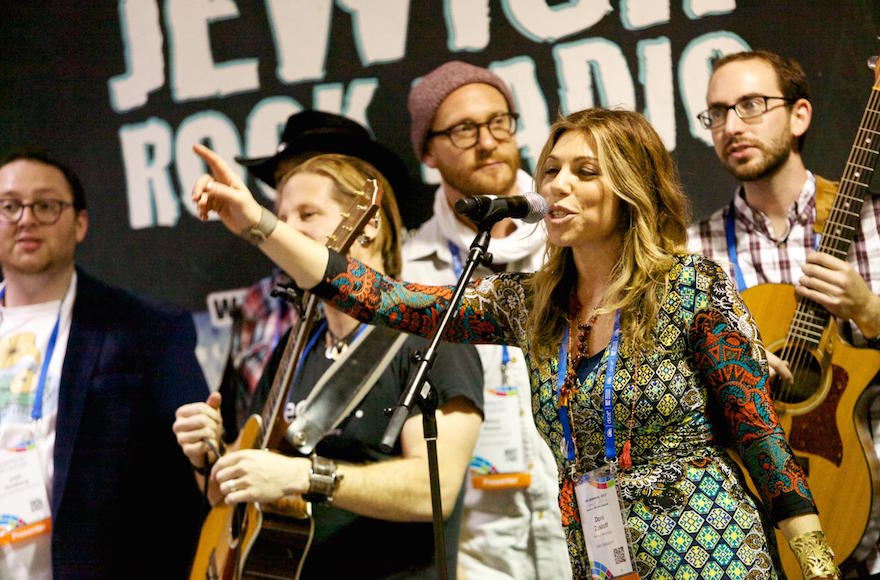 BOSTON (JTA) — Emily Katz and Liora Hyman arrived early enough to snag front row seats for a concert with some of their favorite performers.

But this show wasn’t at one of Boston’s storied nightclubs. Rather, it was the first-ever music lab at last week’s biennial convention of the Union for Reform Judaism, where 6,000 delegates gathered at the Hynes Convention Center for the movement’s largest ever gathering.

When popular Jewish singer-songwriter Peri Smilow led off the set with her new song, “One,” the excited teens, who are youth song leaders, could hardly sit still. The friends — who met last summer at a program for youth leaders at URJ Kutz Camp in Orange County, New York— were on their feet, singing, jumping and bouncing with the beats that constitute the Jewish soundtrack of their lives.

“One” is heard in “Together As One,” a newly released CD compilation of eight songs about social justice, written by some of the Reform movement’s all-star musicians. The project, which benefits the movement’s Religious Action Center, was funded by Isabel Dunst, chair of RAC’s commission on social action.

While songs and melodies are integral to worship in all the major Jewish denominations, the Reform movement has been the boldest in experimenting with genres and reshaping traditional liturgy in song. It’s an emphasis reflected in synagogue services, religious schools and summer camps. The Hava Nashira Institute, an annual five-day summer program in Wisconsin, serves as a unifying training ground for synagogue and camp song leaders and cantors, and attracts people from outside the Reform movement.

Katz, a high school junior who helps lead religious services at Temple Beth Jacob in Concord, New Hampshire, said being a Jewish song leader is emotionally fulfilling. “The music completes me,” she said. “We are all singing the same song. We all know the words. It is so much fun singing the music we all love.”

But in the sounds and lyrics of this contemporary Jewish music, Katz and Hyman, a high school senior from Long Island, New York, find more than social engagement and entertainment — it is a source of inspiration for their faith, they both told JTA.

The biennial’s schedule demonstrated the centrality of music in the Reform movement: There were three dozen musicians, a choir, late-night concerts, multiple workshops on worship music and musical approaches for congregations. There were more than 30 performances staged in partnership with Jewish Rock Radio, part of a nonprofit founded by musician Rick Recht, who grew up in Reform’s NFTY youth group. There was a coming-out party for PJ Library Radio, a streaming music service from PJ Library, the popular Jewish children’s book giveaway organization.

“Music plays one of the key roles in how our services continue to transform our movement,” said Cantor Rosalie Boxt, director of worship for the URJ and the former cantor at Temple Emanuel in Kensington, Maryland.

The music of the Reform movement is attuned to the world around it, Boxt said. It’s an ethos that dates back to the late nineteenth century in Germany, when Reform synagogue music was influenced by church music, she noted. While the more traditional movements eschewed instruments during Shabbat and holy days, Reform temples welcomed pipe organs, strings and, later, guitars and percussion. Nineteenth-century composers like Solomon Sulzer and Louis Lewendowski set prayers in styles that borrowed from the contemporary genres of their day, a practice that continued into the next century.

Starting in the 1960s, the folk music revival was introduced to the Reform movement — a transition most associated with Debbie Friedman, a prolific singer-songwriter who died in 2011 at age 59. Beginning in the late 1960s, she helped move the Reform movement away from the organ, choir and a cantorial soloist to the guitar-plucking, participatory style of the American folk scene.

“We embraced the idea that American folk music could tell our stories … and we shaped that into something Jewish,” said Cantor Jeff Klepper, a contemporary of Friedman and co-composer, with Rabbi Daniel Freelander, of the popular song “Shalom Rav.” Klepper, a cantor at Temple Sinai in Sharon, Massachusetts, said he and his colleagues, who began performing the early 1970s, saw music as a way to bring people together and affirm Jewish beliefs and values.

The URJ biennial featured the North American premiere of the “Debbie Friedman Suite,” arranged and conducted for a full orchestra by Or Oren, a 24-year-old Israeli composer who is a film-scoring student at the Berklee College of Music in Boston. The suite includes nine of Friedman’s songs, including “L’Chi Lach,” her gender-neutral interpretation of Genesis 12. “They are the symbol of her music and mean a lot to Jewish communities here and other places in the world,” Oren wrote in an email.

Klepper, Boxt and others noted that there’s an explosion of music being written and incorporated into the Reform movement. The music is more varied than three and four decades ago, and brings in broader musical influences. Klepper pointed to Joe Buchanan, who celebrates his decision to become a Jew-by-choice in Texas-style country blues.

According to Boxt, the array of music influences, from bluegrass to gospel to traditional Ladino songs, resonates with congregants, many of whom are interfaith families and Jews-by-choice.

One new trend Boxt has observed is a mashup, where kids and teens pair a popular contemporary secular song about love or justice with a Jewish prayer with a similar theme. 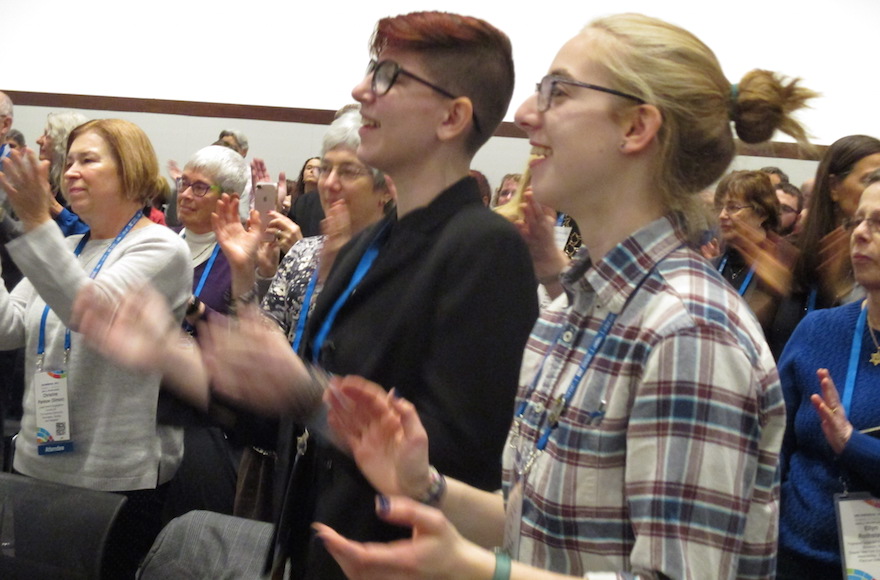 Liora Hyman, left, and Emily Katz were on their feet at a performance of songs from “Together As One,” a compilation of new social justice protest songs, unveiled at the Reform movement’s biennial in Boston, Dec. 6-10, 2017 (Penny Schwartz)

“I feel the music is my connection with God,” he told JTA in a phone conversation. He enjoys teaching music to younger kids, which he does regularly at Temple Isaiah.

As for Hyman, the New York teen who’s the daughter of two Reform cantors, said as a child she was lulled to sleep to the music of Debbie Friedman. She envisions a future in Jewish education and music.