Israel is not the problem in Middle East, Trump’s security plan says 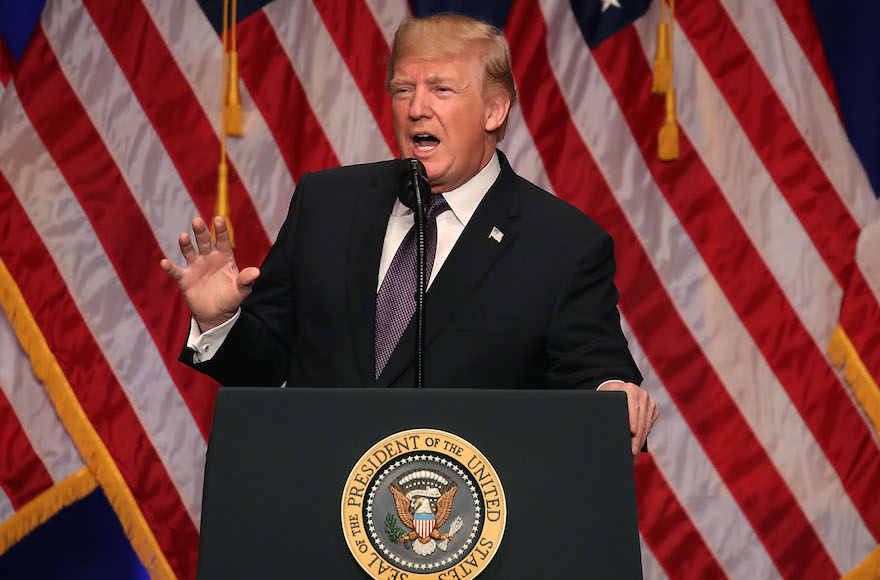 WASHINGTON (JTA) — Israel is not the cause of problems in the Middle East, according to the Trump administration’s plan on national security.

“For generations, the conflict between Israel and the Palestinians has been understood as the prime irritant preventing peace and prosperity in the region,” the 68-page document unveiled Monday says in its section on the Middle East.

“Today, the threats from jihadist terrorist organizations and the threat from Iran are creating the realization that Israel is not the cause of the region’s problems,” it says. “States have increasingly found common interests with Israel in confronting common threats.”

The document also refers to efforts to relaunch Israeli-Palestinian peace talks led by Jared Kushner, Trump’s adviser and son-in-law, saying the U.S. remains “committed to helping facilitate a comprehensive agreement that is acceptable” to both sides.

Confronting Iran is a key element of the document spelling out the U.S. security strategy. It describes the “flawed” 2015 deal between that country and the international community trading sanctions relief for a rollback of Iran’s nuclear program.

“We will work with partners to deny the Iranian regime all paths to a nuclear weapon and neutralize Iranian malign influence,” it said.

In his speech announcing its release, Trump was even tougher on the Iran agreement, calling it “disastrous, weak and incomprehensibly bad,” and noting that he has refused to certify Iranian compliance with the pact.

Trump also said the United States would continue to lead the effort to crush the Islamic State terrorist group.

The thrust of the policy and of Trump’s speech was that the president would oversee a sharp break with previous administrations on a range of issues, depicting Trump as more determined than his predecessors to prioritize American interests first and to build a robust military.

“Our citizens watched as Washington politicians presided over one failure after another,” Trump said, although historians have counted the collapse of Soviet power under Presidents Ronald Reagan and George H. W. Bush, the first Persian Gulf War under Bush and the U.S. interventions in Yugoslavia under Bill Clinton, among others, as successes.

Some of the policies Trump addressed in his speech do represent departures from his predecessors, particularly on immigration. Much else, however, is consistent with decades of American policy.

On the Israel issue, for instance, past administrations have said resolving the Israeli-Palestinian conflict would facilitate other U.S. policies, but no administration since at least the 1970s has described it as a “prime irritant” in the region.

Kushner, speaking earlier this month at the Saban Forum, like many of his predecessors, said that resolving the Israeli-Palestinian issue was a priority in terms of creating greater stability in the region.

“You have the Israeli-Palestinian issue,” Kushner said. “If we’re going to try and create more stability in the region as a whole you have to solve this issue.”

Israel and Jewish groups tend to reject the concept of “linkage,” which suggests solving the Israeli-Palestinian conflict is the key to solving wider regional issues.