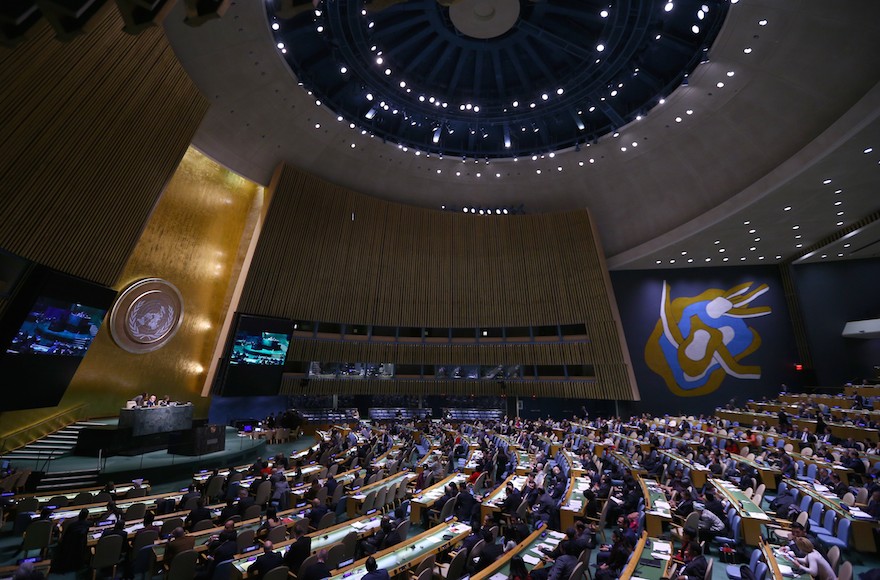 NEW YORK (JTA) — The U.N. General Assembly will hold an emergency session on President Donald Trump’s decision to recognize Jerusalem as the capital of Israel.

The main representative organ of the United Nations, which includes all 193 of the international body’s members, will vote Thursday on a resolution urging Trump to rescind his Jerusalem recognition, the Palestinian U.N. ambassador, Riyad Mansour, told Reuters.

Since 1950, the General Assembly has only held 10 emergency sessions, according to the news agency.

Arab and Muslim countries requested the meeting, which represents the continuation of a 2009 emergency session to discuss East Jerusalem and Palestinian territories, Reuters reported.

On Monday, the United States vetoed a similar resolution at the U.N. Security Council supported by the other 14 members. However, the U.S. does not have veto power at the General Assembly.

Trump reversed decades of U.S. policy earlier this month when he recognized Jerusalem as Israel’s capital and began the process of moving the U.S. Embassy there from Tel Aviv. The Palestinians and Arab and Muslim countries expressed outrage, and much of the world came out against the move.

Nikki Haley, U.S. ambassador to the U.N., said on Twitter that she was hoping American allies would not vote against the country’s decision.

“The U.S. will be taking names,” she tweeted.

At the UN we're always asked to do more & give more. So, when we make a decision, at the will of the American ppl, abt where to locate OUR embassy, we don't expect those we've helped to target us. On Thurs there'll be a vote criticizing our choice. The US will be taking names. pic.twitter.com/ZsusB8Hqt4