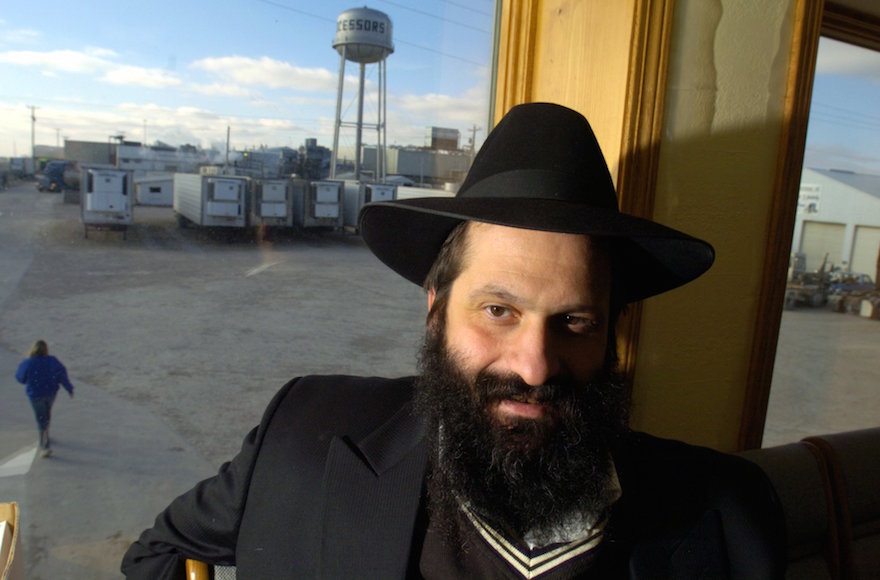 Sholom M. Rubashkin seen in Postville, Iowa, in December 2004. Rubashkin was sentenced to 27 years in prison for 86 counts of financial crimes as well as lying on the witness stand in 2009. (Zbigniew Bzdak/Chicago Tribune/TNS via Getty Images)
Advertisement

WASHINGTON (JTA) — President Donald Trump commuted the sentence of Sholom Rubashkin, the chief executive of what was then the largest kosher slaughterhouse in the country, who was convicted of bank fraud and money laundering charges.

Trump cited appeals from across the political spectrum in making the move.

“In 2009, he was convicted of bank fraud and sentenced thereafter to 27 years in prison,” a statement Wednesday by the White House said. “Mr. Rubashkin has now served more than 8 years of that sentence, which many have called excessive in light of its disparity with sentences imposed for similar crimes.”

The statement described the commutation as an “an action encouraged by bipartisan leaders from across the political spectrum, from Nancy Pelosi to Orrin Hatch,” referring to the Democratic leader in the U.S. House of Representatives and the Republican senator from Utah, respectively.

“This action is not a Presidential pardon,” the statement said. “It does not vacate Mr. Rubashkin’s conviction, and it leaves in place a term of supervised release and a substantial restitution obligation, which were also part of Mr. Rubashkin’s sentence.”

A massive federal immigration raid in 2008 at the Agriprocessors meatpacking plant in Postville, Iowa, led to the arrest of nearly 400 undocumented Guatemalans and Mexican workers. A jury acquitted Rubashkin on charges of harboring illegal immigrants and employing child labor, but he was charged later on the bank fraud and money laundering charges as he tried to sell the company, which was on the verge of bankruptcy.

Advocates for Rubashkin, among them prominent legal and political figures, later offered evidence that they said showed prosecutors tampered inappropriately with the case. They provided affidavits showing prosecutors scared off potential buyers by saying they would seize the company if a Rubashkin family member was involved in the purchase.

As the company’s value plummeted, Rubashkin masked its poor financial health, leading to the criminal charges, according to this argument.

Rubashkin, a member of the Chabad Lubavitch movement, is 57. He has 10 children, which Trump noted in his commutation.

Billionaire Hershey Friedman of Montreal purchased the meatpacking plant in 2009 and rebranded it as Agri Star Meat and Poultry.

“I am proud to be a part of a large, bipartisan group of members of Congress who, along with over a hundred former senior justice officials, have been calling for Mr. Rubashkin’s release for the past eight years,” Hatch tweeted.

Large crowds gathered in the Chabad enclave of Borough Park, Brooklyn Wednesday night, where Rubashkin was expected to visit his parents. Rubashkin had imprisoned at the Otisville, New York Federal Correctional Facility.

Law professor Alan Dershowitz, calling Rubashkin’s sentence “excessively unjust,” also praised the decision, saying Trump “did the right thing.” Dershowitz had long argued that the trial judge in the case, Linda Reade, should have recused herself because she was “actively engaged” in planning the original Agriprocessors raid. He called it a case in which the prosecution “was too zealous and a judge who was too involved in pretrial prosecution strategies.”

Prosecutors argued in response that it was Rubashkin’s criminal conduct that drove down the sale price of the company, not interference by prosecutors.

One of those prosecutors, former assistant U.S. attorney in Iowa Robert Teig, told the Des Moines Register that Rubashkin “couldn’t win legally, factually or morally, so he had to win politically. It’s sad when politics interferes with the justice system.”

Teig also told the Associated Press that the White House decision “makes no sense” given Trump’s vows to crack down on illegal immigration.