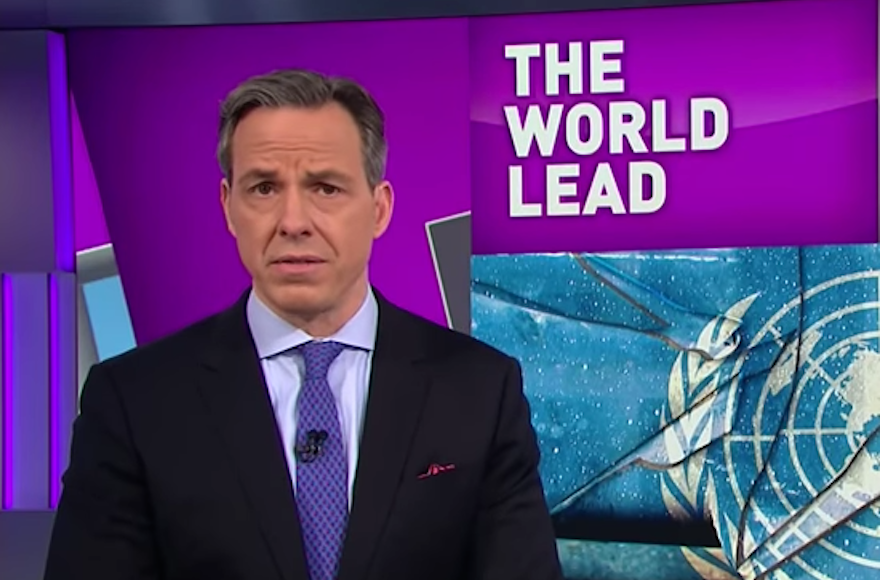 (JTA) — Jake Tapper is calling out many of the countries who rebuked President Trump and Israel at the United Nations on Thursday.

After 128 countries voted to condemn Trump’s decision to recognize Jerusalem as Israel’s capital and eventually move the U.S. embassy there, the CNN anchor let loose on “The Lead.” He sharply criticized Venezuela, Syria, Yemen, North Korea, Myanmar and other countries he said have “rather questionable records of their own.”

“[There’s] violence in the streets, an economy in complete collapse, citizens malnourished, dying children being turned away from hospitals, starving families joining street gangs to scrounge for food,” he said. “On what moral platform does the government of Venezuela stand today?”

Tapper went on to criticize Syria and Yemen, countries that he noted were embroiled in brutal civil wars.

“There are plenty of policies and actions that are perfectly valid to criticize about the United States and about Israel, and certainly whether this [Jerusalem] move will help the peace process in any way seems one of them,” Tapper said. “But listening to these countries, including North Korea and Myanmar and Turkey and China lecturing the United States in any way about human rights and peace might seem a bit much.”

Tapper, who is Jewish, also showed a graphic that explained how between 2012 and 2015, the U.N. adopted 97 resolutions criticizing one specific country — and Israel was the target of 83 of them.

“You have to ask, is Israel truly deserving of 86 percent of the world’s condemnation, or possibly is something else afoot at the United Nations, something that allows the representative of the Assad government to lecture the U.S. for moving its embassy?” he said.