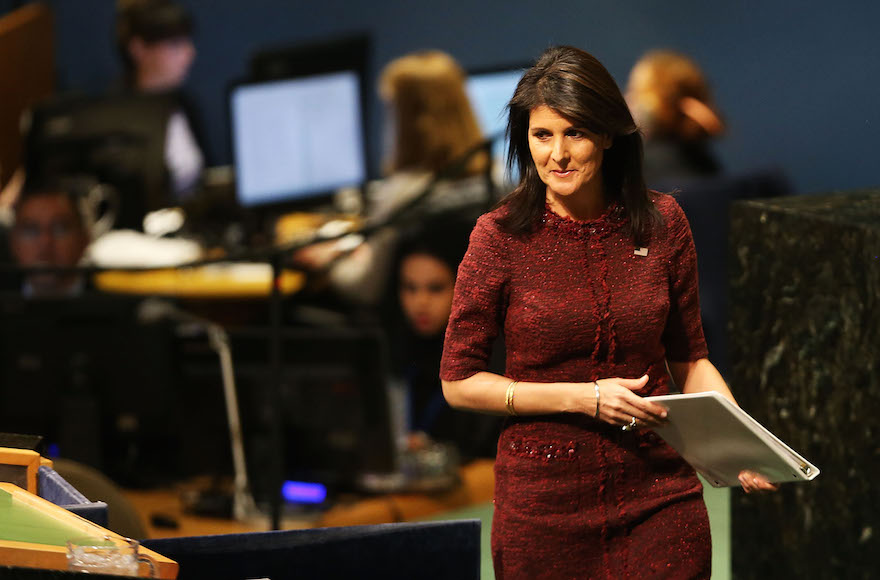 (JTA) — To thank the 65 countries that did not support a resolution condemning President Donald Trump’s position on Jerusalem, the U.S. ambassador to the United Nations, Nikki Haley, invited her counterparts from those states to a reception.

Nine countries voted against the resolution, including Israel, the United States, Guatemala, Honduras and Togo, and 35 abstained, including the six EU member states Poland, Romania, Hungary, the Czech Republic, Croatia and Latvia. The rest of the European Union was among the 128 nations that voted in favor.

The representatives of 21 countries were absent from the vote, which was the 10th time in U.N. history that the General Assembly was convened for an emergency voting. They included Kenya, which was the fifth-largest recipient of U.S. aid last year, Georgia and Ukraine, all of which have close ties with the United States.

Prior to the vote, Trump wrote on Twitter: “We’re watching those votes. Let them vote against us, we’ll save a lot. We don’t care.” His words were widely interpreted as a threat to cut aid to countries that vote against the United States position on Jerusalem.

The resolution, sponsored by Yemen and Turkey, reaffirmed what has been the U.N. stand on the divided holy city since 1967: Jerusalem’s final status must be decided in direct negotiations between Israel and the Palestinians.

Later Thursday, an invitation was sent around to the countries that did not support the resolution on Jerusalem to attend a reception with Haley in January. The event was labeled as a means to thank the countries for “their friendship to the United States,” according to a copy of the invite obtained by CNN.

In her speech at the emergency vote, Haley noted that the “United States is by far the single largest contributor to the United Nations and its agencies.”

Aid is given, she added, “in order to advance our values and our interests. When that happens, our participation in the United Nations produces great good for the world.” The United States does this “because it represents who we are. It is our American way.”

Trump’s pronouncement on Jerusalem ended decades of U.S. ambiguity on the status of the city that both Israel and the Palestinians claim as their capital.