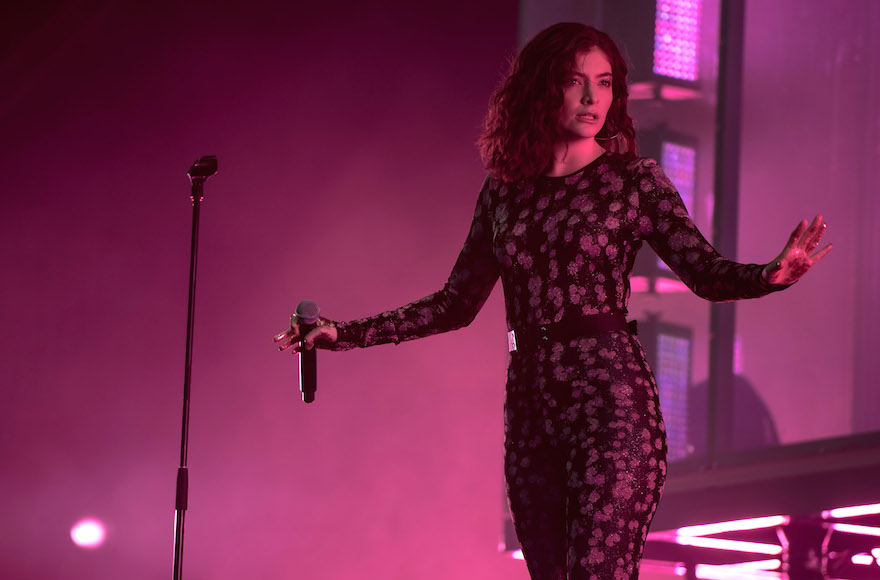 (JTA) — Pop star Lorde has cancelled a summer concert in Tel Aviv announced less than a week ago after pro-Palestinian fans in her native New Zealand criticized her.

Israeli concert organizers announced the cancellation Sunday night, according to local media, including the Hebrew-language Ynet, and said ticket sales would be refunded.

Producer Eran Arieli in a post on Facebook apologized to fans, and said that the 21-year-old performer would tweet “sometime” about the circumstances of the cancellation

“I was naive to think an artist of her age could handle that pressure,” he wrote in the post.

He added: “It’s important to me that the end of the day we will thank her for considering us and giving us the opportunity in the first place, and also apologize to her, she doesn’t deserve all the shit she’s been through in the last week since the announcement. The last thing she needs on her comeback tour is the army of globalist anti-Semites weighing down on her head.”

He also said: “My esteem for her has not been affected by this incident.”

“This is not the first cancellation we’ve experienced and it won’t be the last,” he also wrote.

Following her announcement of a Tel Aviv concert date in June on Monday, New Zealanders Nadia Abu-Shanab and Justine Sachs — the former Palestinian and the latter Jewish — wrote an open letter on Thursday on the website The Spinoff saying that Lorde’s scheduled performance in Israel “sends the wrong message.”

In response, the 21-year-old singer said in a tweet she was “considering all options. Thank u for educating me i am learning all the time too.”

The Simon Wiesenthal Center in a statement condemned the singer’s decision to cancel.

“This is a classic example of the world’s singular obsession with one country, the State of Israel,” said Rabbi Marvin Hier, founder and dean of the Simon Wiesenthal Center in the statement. “The fact that Lorde still intends to perform in Russia, and has no issues with that country’s multiple human rights abuses in the Ukraine, is a clear example of the hypocrisy the international community applies to the Middle East’s only democracy,” he also said.

“This double standard smacks of anti-Semitism.  Not performing in Israel will only embolden extremist groups like Hamas, Hezbollah and Islamic Jihad,” Hier concluded.

Earlier this year, former Pink Floyd frontman Roger Waters clashed with Thom Yorke, the singer of the British band Radiohead, and Australian rocker Nick Cave over their performances in Israel. Waters, a leading proponent of the BDS movement, urged Yorke and Cave to cancel their concerts in Israel. Both refused — Yorke called the BDS campaign “offensive” and Cave said Waters subjects musicians to “public humiliation” over the issue.

Several popular musicians, such as Elvis Costello and Lauryn Hill, have cancelled past concerts in Israel over the government’s policies towards the Palestinians.