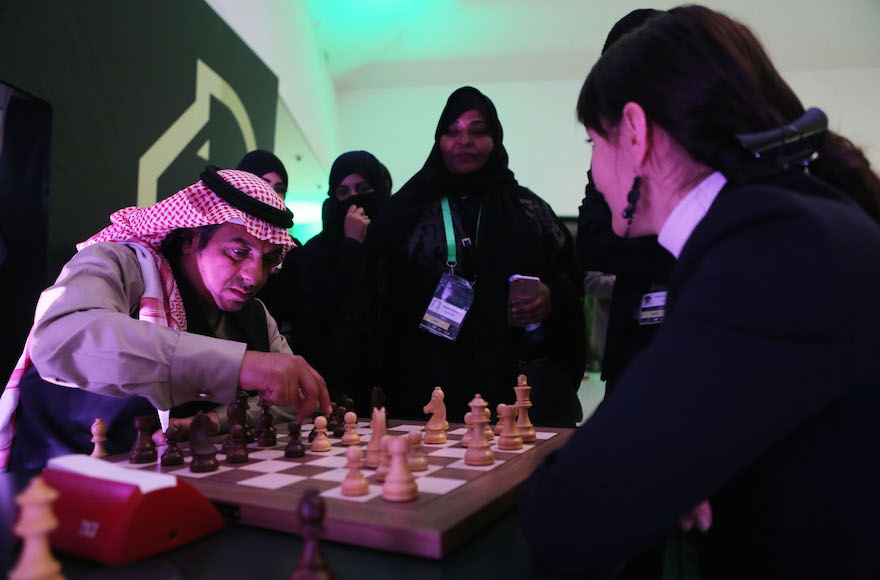 JERUSALEM (JTA) — Seven Israeli chess players have been denied visas to play in a chess championship in Saudi Arabia.

The tournament begins on Tuesday. As of Monday the visas sill had not been issued.

Israel Gelfer, vice president of the World Chess Federation, or FIDE, and a FIDE Master from Israel, told Reuters on Sunday from Athens that the visas for the Israeli players “have not been issued and will not be issued.” He also asserted that the tournament would take place as planned.

Some 180 chess players were slated to participate in the world rapid and blitz chess championships in Riyadh. It is the first time that Saudi Arabia has hosted a major chess championship.  The tournament includes cash prizes of up to two million dollars.

Saudi Arabia does not have diplomatic relations with Israel.

“The event is not a world championship if they prevent chess players from several countries from taking part,” Aizenberg said. “Every chess player should have the right to participate in an event on the basis of professional criteria, regardless of their passports, their place of issue or the stamps they bear.”

Aizenberg also said in a statement that the Israel Chess Federation plans to organize its own championship “in the near future” for the Israeli players and “for the excellent players from around the world who support our participation in the tournament.”