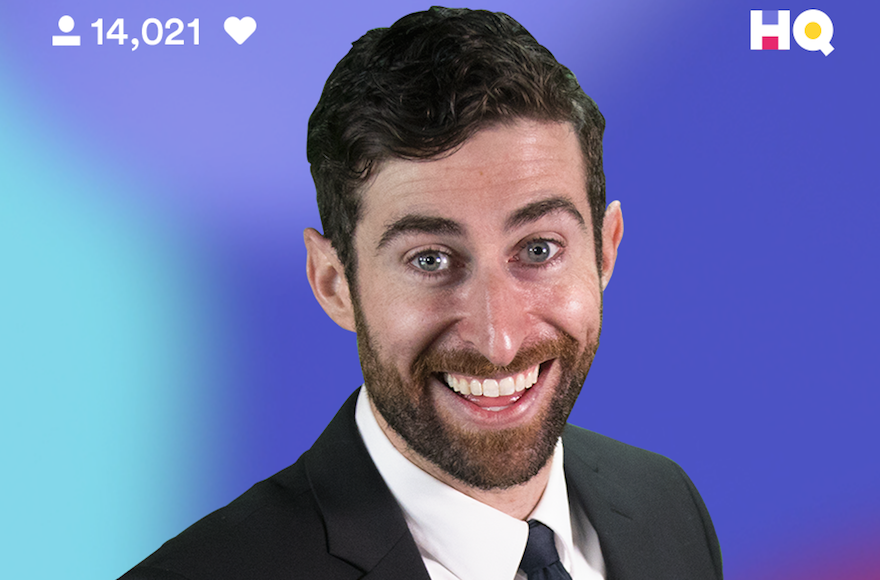 NEW YORK (JTA) — Trivia is having a major moment — and that’s thanks, in large part, to Scott Rogowsky.

The Jewish comedian has played a huge role in the runaway success of HQ Trivia, the iPhone app turned massive phenomenon that now has some 500,000 people glued to their iPhones at 3 p.m.  and 9 p.m. every weekday for a chance to feel smart and win money.

HQ Trivia is presented in the format of a game show — it’s hosted live by Rogowsky from New York twice a day. The app was created in August by Rus Yusupov and Colin Kroll, the founders of video-sharing site Vine, and it works like this: At the appointed times, users take a stab at correctly answering 12 multiple choice questions (which start easy but rapidly become more difficult). Those who answer all 12 questions correctly split a pot of prize money, which typically ranges from $1,500 to $12,000.

During the game, Rogowsky — a chipper funnyman who lives in his hometown of Harrison, N.Y. and describes himself as being in his “exceedingly late 20s” (although according to some online sources he is in his 30s) — throws in plenty of jokes, puns and shout-outs to competitors, whom he affectionately refers to as “HQuties.”

Notably, Rogowsky is very vocal about his Jewish identity; live on HQ he’s referred to himself as the “Semitic Sajak” (that’s in reference to “Wheel of Fortune” host Pat Sajak) and the “Meshuggeneh Martindale” (as in Wink, the host of “Tic-Tac-Dough”). He has wished winners “mazal tov” and, on the first night of Hanukkah, he wore a vibrant blue-and-white suit emblazoned with Stars of David.

(When he’s not doing HQ Trivia duties, Rogowsky has made Jews and Judaism part of his comedy career.)

In an email interview with JTA (in the form of — you guessed it — 12 questions), Rogowsky got candid about his experience hosting the game show, his Jewish background and his dating life. Oh, and he cracked a few jokes, too. 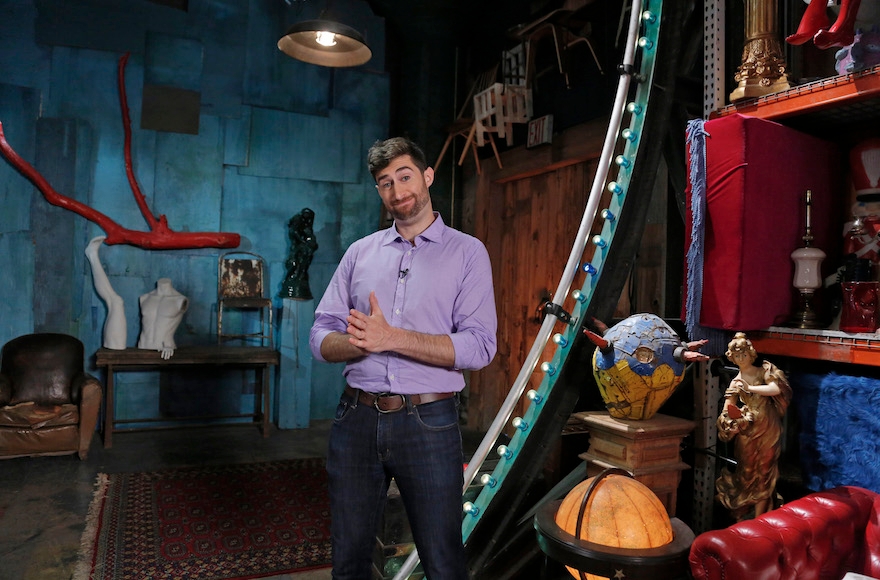 Scott Rogowsky on the set of the 2013 ABC show “Would You Fall for That?” (Heidi Gutman/ABC via Getty Images)

JTA: HQ Trivia launched in August. What have the last five months been like for you?

Rogowsky: For my first few months at HQ Trivia, my life was — for the most part — the same as it had always been. Even at temple during the High Holy Days, I was having to explain to people exactly what I was doing, trying to convince them to download the app. But in the short time since Thanksgiving — when HQ exploded — it has been a complete blur. I still haven’t fully caught my breath!

Would you have thought a year ago that you would be the host of a smartphone trivia show?

A year ago, I would have thought I’d be living in Spain by now, having quit comedy and begun a second career as an ESL teacher, dating a flamenco dancer, subsisting on Manchego and churros… Actually, I’d still like to do that.

Do you help pick the questions?

HQ Trivia has a team of writers who put together the stacks, then I go through them for final edits before each live game.

“Which baseball player holds the Major League record for most total bases in a single 9-inning game?” The answer is Shawn Green, and it’s my favorite because Shawn Green tweeted me his appreciation after that game. To find out that the greatest Jewish baseball player of my generation plays HQ Trivia is enough for me to retire on, frankly.

You are open about being Jewish on HQ Trivia. Has this lead to any anti-Semitic harassment?

Much to my surprise, no! As with any social platform, there will always be trolls, but HQ Trivia has guidelines in place to ensure the chat vibes remain chill and family-friendly. As for tweets, I’ve had a few “you sucks” fired off at me, but, so far, not a single “get in the oven!” which is truly miraculous.

You have said you’re single and dating at the moment. Has being the HQ Trivia host lead to date proposals from any nice Jewish girls or boys?

I’ve had my fair share of tweets, DMs, emails, Facebook Messages and friends trying to set me up with friends… which is all very flattering, but the bottom line is: I’m far too busy to care for myself right now — let alone another person! And with 9 p.m. ET live games, scheduled seven nights a week, my availability isn’t ideal for most nice Jewish girls.

What was the best Hanukkah present you got this year?

I received a snazzy Hanukkah blazer from my pals at Shinesty Threads. I wore it on HQ on the first night and I think it broke the Jewish Internet.

CHAPPY CHANUKKAH #HQties! For those asking about the festive duds, blaze on over to @shinestythreads and they’ll hook a Hebrew up!

How would you describe your Jewish identity?

What’s your favorite thing about being Jewish?

Being interviewed by the JTA. You’re not going to see a profile of Jim Gaffigan in these pages! Also, the jokes.

It’s unprintable. But I’ll tell you my favorite publication-friendly joke that I’ve written: My mother is a born-again Jew. She saw the light, and then she asked if she could be seated away from it.

Favorite Jewish holiday and why?

Tisha B’av. Because whenever I’m home to visit my mother she says, “And when am I going to see you again? Next Tisha B’av?”