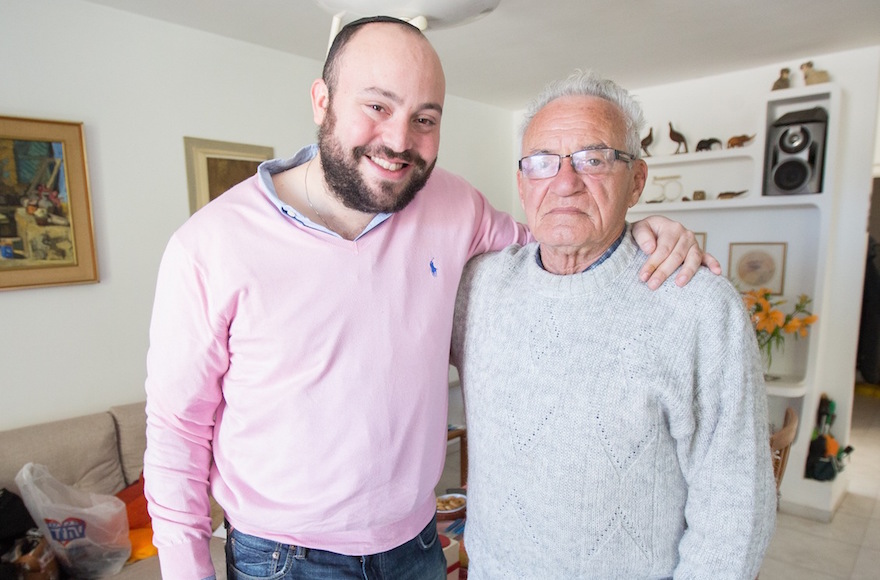 Jonny Daniels, left, with Holocaust survivor Moshe Tirosh in 2015. (From The Depths)
Advertisement

MIĘDZYRZEC PODLASKI, Poland (JTA) — In a snowy woods near the border with Belarus, Jonny Daniels pulls muddy fishing waders over the pants of his tailored business suit and grabs a shovel from the trunk of his car.

A London-born Israeli activist for Holocaust commemoration, Daniels, 31, had worn the suit for a meeting last year with Polish government officials in the country’s east. And he put on the waders shortly after learning at that meeting of a village road made of Jewish headstones — which he then decided to salvage.

Both get-ups are “uniforms” that Daniels always has with him, he said while struggling to break the frozen ground to extract the headstone fragments.  He later deposited the stones at a local Jewish cemetery as part of a commemoration project by the charity that Daniels established in 2014 called From the Depths.

“Though I admit I don’t usually wear them in layers. This is odd even for me,” he added.

Odd, perhaps, but nonetheless an appropriate demonstration of the tools that Daniels, a public relations specialist and former parliamentary aide in Israel’s Knesset, has used to become one of the best-known Jews in Poland just four years after moving here. It was through a mix of hard work, strategic alliances with some locals and Poland’s right-wing government, publicity stunts and an embrace of controversy.

Daniels’ first project in Poland was in 2014, when he brought over half the Knesset to the former death camp of Auschwitz using money from private donors. The following year he partnered with local weightlifters to help move Jewish headstones, providing a colorful photo op for international media. And in early 2017, Daniels brought to Poland former NBA All-Star Ray Allen for meetings with Holocaust survivors and their rescuers.

Leveraging his exposure with local politicians — last month alone Daniels appeared on national television and the front pages of the left-leaning Gazeta Wyborca daily, as well as the conservative Do Rzeczy weekly — he has made some powerful allies, including Prime Minister Mateusz Morawiecki. Daniels hosted Morawiecki at events and even at his own home in Warsaw, where Daniels throws Shabbat dinners for politicians and journalists — often their first such experience in a country with only 6,000 Jews.

Daniels, who has helped restore hundreds of Jewish headstones and raised millions to honor saviors of Jews during the Holocaust, says his alliances and media profile are “helping Poles and Jews bridge their tragic history toward greater understanding that will reduce mutual suspicion and anti-Semitism.”

This goal, and the need to improve the “horrendous situation of Jewish burial sites” in Poland, were his motivation for becoming involved with fieldwork in Poland, said Daniels, whose family hails from the Eastern European nation. His grandfather fled the country for the United Kingdom after surviving a lynching.

“I felt, and I still feel, that it’s my duty. It’s almost as though I feel them calling out to me from their ruined graves,” Daniels said. 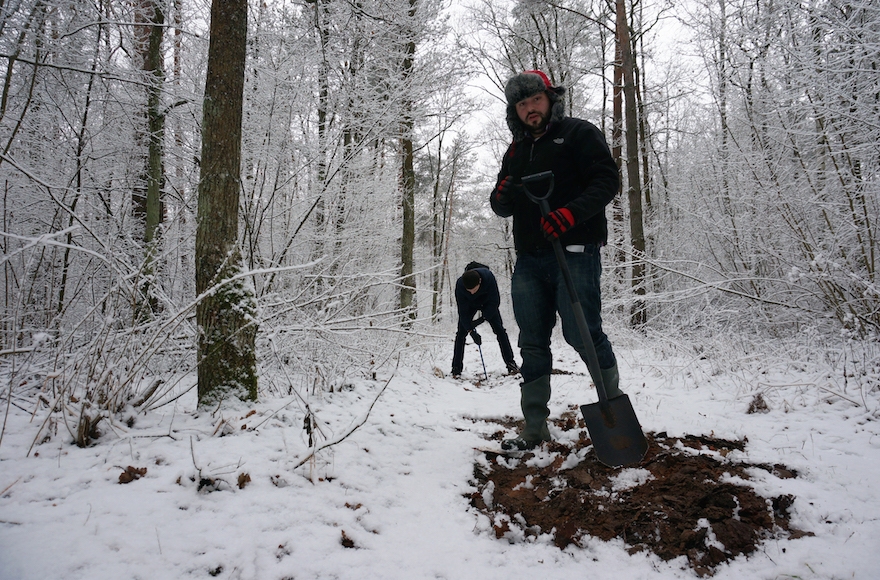 Jonny Daniels, foreground, and Robert Skrupa, a From the Depths volunteer, digging up fragments of Jewish headstones in eastern Poland, Jan. 29, 2015. (Cnaan Liphshiz)

His successful outreach has earned Daniels praise and appreciation from many Poles, including some leaders of Polish Jewry. In 2016, Daniels signed a general agreement of cooperation with the cultural group TSKZ,  the country’s largest Jewish organization with 1,200 members. It was a major breakthrough for Daniels, who until that point had few allies within Poland’s Jewish community.

But his fame and coziness with the nationalist government — currently the European Union’s bête noire for its alleged inaction on racism, defanging of the Supreme Court and anti-abortion policies — also have exposed Daniels to scathing criticism, including by some leaders of the local Jewish community.

Among his most outspoken critics is the chief rabbi of Poland, Michael Schudrich, who is also a critic of the current government. In an interview for the Daily Forward in November, Schudrich said that some say Daniels is “engaged in the world’s oldest profession” for his ties to that government.

Sergiusz Kowalski, a leader of B’nai B’rith Poland, called Daniels a “court Jew who’s trying his best to promote the anti-democratic propaganda and policies of the ruling Law and Justice party.” And Anna Chipczyńska, the president of the Jewish Community of Warsaw, said “people find it ridiculous what he’s doing,” accusing him of trying to undermine the community’s elected representatives by meeting politicians on his own.

Even Daniels’ promotion of non-Jews who risked their lives to save Jews in Poland has come under attack. Kowalski branded such efforts, which had the help of government officials, an “abuse of noble rescuers” to help the government show a “more civilized face” and to highlight positive behavior during the Holocaust at the expense of exploring dark chapters of complicity by other Poles.

Daniels said that “honoring rescuers is nonpartisan.” He denies having any sympathy for the Polish far right, whose activists often accuse him of being a Russian, American or Israeli spy working to undermine Polish sovereignty.

“My critics within the Jewish community perceive me inaccurately as a threat to their position,” he said, “so they attempt to slander me instead of cooperating. It’s regrettable.”

Israeli politicians, by contrast, have had no problem visiting Poland on trips organized by Daniels. They have included Ayoob Kara, the communications minister; Hilik Bar, the deputy Knesset speaker and secretary general of the Labor party; and Oren Hazan, a Likud lawmaker and provacateur.

Reacting to criticism over his ties to the current government, Daniels noted that he worked just as closely with the previous one. He said he criticizes Polish authorities frequently for their handling of some Jewish gravesites, former Nazi concentration camps and failure to prevent illegal hate speech against Jews, including during a nationalist march in November. That month, Daniels filed a complaint with police against individuals who shouted anti-Semitic slogans at the Warsaw march.

Yet Daniels has himself trafficked in classic ultranationalist terminology during television interviews in Poland. In one interview in October with the TVP station, he linked the criticism of Poland by some Jews to a desire to make money off the Holocaust.

“There’s such a thing as the Holocaust industry. There are Jews — leftist Jews — benefiting from the Holocaust. That’s the truth,” he said. “The leftist Jewish media continue to attack Poland and portray Poland as a racist country. They earn from it. This helps them, for example, to get restitution.”

That sentiment may be offensive to many Jews in Poland and beyond, but it is nonetheless echoed by some of the most prominent figures in Poland’s fractious Jewish community — an environment that many members describe as toxic, rife with rumors, recriminations, allegations of corruption and deep personal animosities.

Artur Hofman, president of the TSKZ cultural group that is allied with Daniels, defended Daniels as someone doing “good work” but being attacked by the “leftist media” and Jewish community leaders. Hofman accused Chipczyńska, the Warsaw Jewish leader, of waging a “political war” on the government by “exaggerating the country’s anti-Semitism problem” while mismanaging millions in restitution funds.

The alleged “political war” was a reference to a letter that Chipczyńska co-authored last year to a senior politician. In an unprecedented act of protest by the Jewish community in post-communist Poland, the letter warned of rising threats to the Jewish community from ultranationalists and charged that the government is not doing enough to rein them in.

Countering Hofman’s claims, Chipczyńska insisted it was an accurate observation born out of her responsibility to maintain the community’s security. 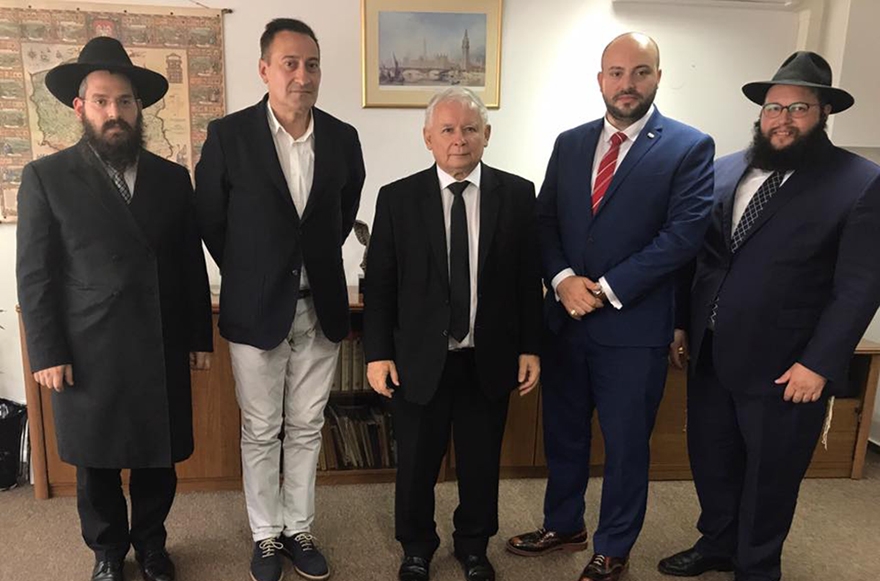 Daniels is also scrutinized for his work as a public relations consultant for the state-owned LOT airline, which is seen as a conflict of interest by several leaders of Polish Jewry, including Rabbi Haim Beliak of the Beit Polska group of Progressive Jewish communities in Poland.

Daniels counters by saying his work for “a firm that is purely a financial enterprise” has no bearing on his Jewish activism. He has refused calls by critics to reveal details about the funding sources for From the Depths, which he says does not receive “a single cent” from the Polish government.

“I am under no legal obligation to disclose this, so I don’t,” he said.

But to many of Daniels’ critics in Poland, the thorniest issue of all is his close relationship with a Catholic priest who for years headed a radio station that was one of the country’s main purveyors of anti-Semitic propaganda. In May, Daniels participated with Father Tadeusz Rydzyk in a show on Rydzyk’s infamous Radio Maryja station. Daniels even hosted the priest at one of his Shabbat dinners.

In 2007, Rydzyk said that “Jews were pushing the Polish government to pay exorbitant private property restitution claims,” and that Poland’s president was “in the pocket of the Jewish lobby.” Anna Azari, Israel’s ambassador to Poland, also hosted Rydzyk at her embassy in a move that infuriated some of her critics within the Jewish community.

Daniels’ relationship with Rydzyk prompted Laurence Weinbaum, an expert on Poland and the global representative in Israel of the World Jewish Congress, to launch a withering attack on Daniels, calling him a “conman” in an op-ed published last month in The Times of Israel titled “In Poland, an anti-Semite, a conman and a useful idiot.”

Weinbaum argues that Rydzyk was using Daniels for a “charm offensive” in order to shed his image as an extremist. Weinbaum also called Daniels a “smooth-talking huckster with a yarmulke perched on his head” with an “insatiable appetite for self-aggrandizement, who seems to have sold his birthright for a bowl of Polish porridge.”

If this is true, Rydzyk apparently has paid in hard currency in the course of the transaction.

According to a November article published in Poland’s highbrow and left-leaning Gazeta Wyborcza newspaper — not a publication known for any great sympathy toward Rydzyk — his station sometime in the last year completely and abruptly abandoned the content that in 2008 prompted the U.S. State Department to call Radio Maryja “one of Europe’s most blatantly anti-Semitic media venues.”

Even critics of Daniels say he deserves credit for this change.

“We all knew Rydzyk and his radio station to be anti-Semitic, and none of us would agree to cooperate with Rydzyk,” said Klaudia Klimek, an opposition activist and head of the Krakow branch of the TSKZ cultural group. “Then Jonny came and behavior of radio changed. This is because of Jonny, for sure.”

Daniels is “maybe too close to the government,” Klimek said, adding that perhaps it was unavoidable because they are the ones in power.

And the priest is “still an anti-Semite,” but that doesn’t matter, Klimek added, “when the interaction with Jonny means that radio station stopped spewing anti-Semitic poison to millions of listeners. Then the outcome is good.”