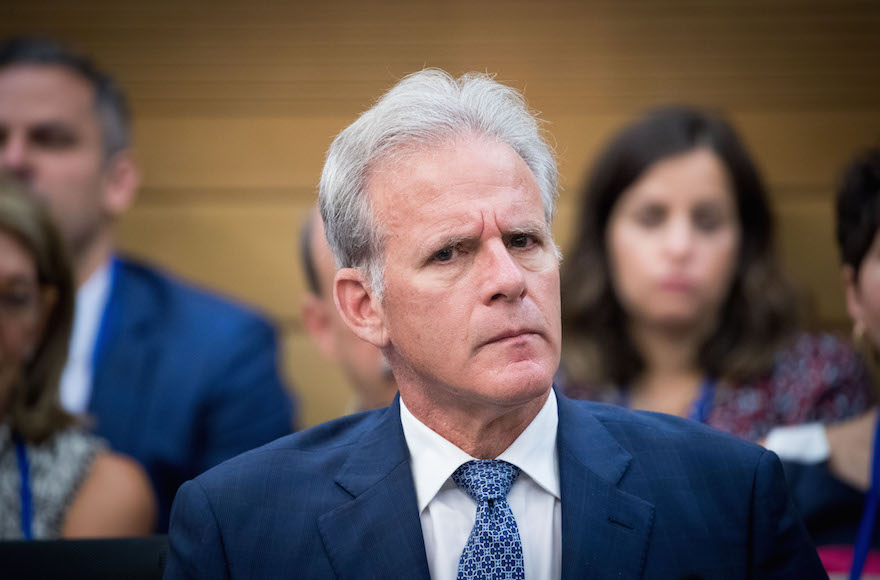 (JTA) — If a Palestinian appears to be committing a terror attack, do they deserve to die on the spot?

The answer is yes, says Michael Oren. The former Israeli ambassador to the United States, now a deputy minister in Israel’s Cabinet, tweeted last week that the Israel Defense Forces should change its rules of engagement, such that soldiers should “shoot to kill” suspected terrorists, instead of just incapacitating them.

“Soldiers who catch terrorists while carrying out attacks must be ordered to shoot to kill not neutralize,” Oren tweeted Dec. 27. “Soldiers responding to terror attacks cannot determine if terrorists are neutralized, as the current open-fire order states. Soldiers are not doctors. But they must ensure that the terrorists pose no further threat.”

Soldiers responding to terror attacks cannot determine if terrorists are neutralized, as the current open-fire order states. Soldiers are not doctors. But they must ensure that the terrorists pose no further threat. Though “neutralized,” Al-Obeid attacked the medics treating him.

Oren’s comments touch on a debate that has coursed through Israeli society since 2015, when a wave of Palestinian stabbing attacks swept across Israel and Israeli forces killed many of the assailants. The debate intensified in 2016 when an Israeli soldier killed a terrorist who was already incapacitated or, in IDF-speak, “neutralized.”

But Oren has a problem with just “neutralizing” attackers.

Soldiers, he said, lack the necessary expertise to know when an assailant can no longer cause harm, and killing is the only definite way to remove the threat.

In his tweets, and again while speaking to JTA on Tuesday, Oren raised the example of Omar al-Abed, who was convicted last week of murdering three Israelis in a July attack on the West Bank settlement of Halamish. Al-Abed was neutralized, but then tried to attack the Israeli paramedics who were treating him following the attack.

“When the medics came to attend to him, he jumped up and could have killed them,” Oren told JTA. “A young soldier in the middle of a terror attack is not a doctor. Even the term [neutralized] is very vague, highly subjective and non-medical.”

Before becoming Israel’s ambassador to his native United States in 2009, Oren was a preeminent historian of the Middle East and Israel. He ended his term as ambassador in 2013 and was elected to Knesset two years later as part of the center-right Kulanu party.

Oren’s position appears to contradict the IDF’s own code of ethics, which instructs soldiers to treat civilians with dignity and to “do all in their power to avoid causing harm to their lives, bodies, dignity and property.” Asa Kasher, one of the code’s co-authors, wrote in the Forward in 2016 that terrorists should be treated as civilians, not as enemy soldiers.

“Soldiers are required to treat a terrorist wielding a knife as a criminal, not as an enemy in a battlefield,” wrote Kasher, a philosophy professor at Tel Aviv University. “The terrorist’s attempt to kill or injure ought to be foiled, but killing him is sanctioned only if there is no effective alternative — only if it’s a last resort.”

Even the IDF’s own chief of the general staff has urged soldiers to show restraint, saying in 2015, “The army cannot speak in slogans such as ‘kill or be killed.’”

Oren, who also was raised in the U.S., disputed the idea that “shoot to kill” runs counter to the code of ethics. He said he is only advocating the measure when terrorists are clearly in the midst of an attack. Determining whether someone is committing terrorism, Oren said, is easier than determining whether they are neutralized.

Avigdor Liberman, Israel’s defense minister, wrote on Facebook in 2015 that “no terrorist should come out of an attack alive” and has sponsored a bill making it easier to sentence terrorists to death, which passed an initial Knesset vote on Wednesday. Prime Minister Benjamin Netanyahu advocated the death penalty for al-Abed, the Halamish terrorist.

In July, al-Abed stabbed three family members to death in their home as they were eating Shabbat dinner. The military advocate general may seek the death penalty, but is not in this case, instead requesting four consecutive life sentences for al-Abed. Only one person has been sentenced to death in Israeli history: Adolf Eichmann, an architect of the Holocaust.

Oren told JTA that he is “ambivalent” about a bill mandating that terrorists receive the death penalty, but said that “shoot to kill” would solve the problem and would be supported by most Israelis.

“That should be the standing order if you see someone in the midst of a terror attack,” he told JTA. “Israelis themselves don’t understand this notion of neutralization. During the stabbings there hasn’t been a big outcry over ‘We should be trying to save these guys.'”