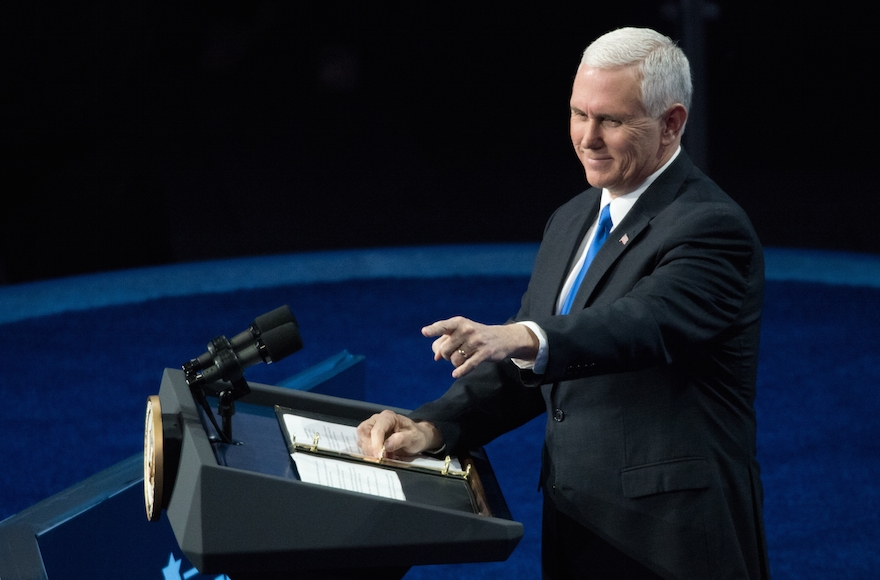 Pence will travel to the Middle East Jan. 19-23, with other stops in Egypt and Jordan to meet with their leaders.

In Israel on the last two days of the trip, the vice president is scheduled to meet jointly with Prime Minister Benjamin Netanyahu and President Reuven Rivlin, and to address the Knesset. He also is scheduled to visit the Western Wall and Yad Vashem.

Palestinian leaders refuse to meet with Pence in the wake of President Donald Trump’s recognition last month of Jerusalem as Israel’s capital.

Pence postponed a planned mid-December visit to Israel so he could preside over the vote on a tax overhaul favored by Trump. It was believed that the vice president may have been needed to cast the deciding vote in the closely divided Senate, but he was not as the plan passed.

The original trip had included meetings in Bethlehem with Palestinian Authority officials.

On the newly scheduled trip, prior to visiting Israel, Pence will meet in Egypt on Jan. 20 with President Abdel Fatah al-Sisi and in Jordan on Jan. 21 with King Abdullah II.

“At President Trump’s direction, the Vice President is traveling to the Middle East to reaffirm our commitment to work with the U.S.’s allies in the region to defeat radicalism that threatens future generations,” Pence’s press secretary, Alyssa Farah, said Monday in a statement. “The Vice President is looking forward to meeting with the leaders of Egypt, Jordan, and Israel to discuss ways to work together to fight terrorism and improve our national security.”