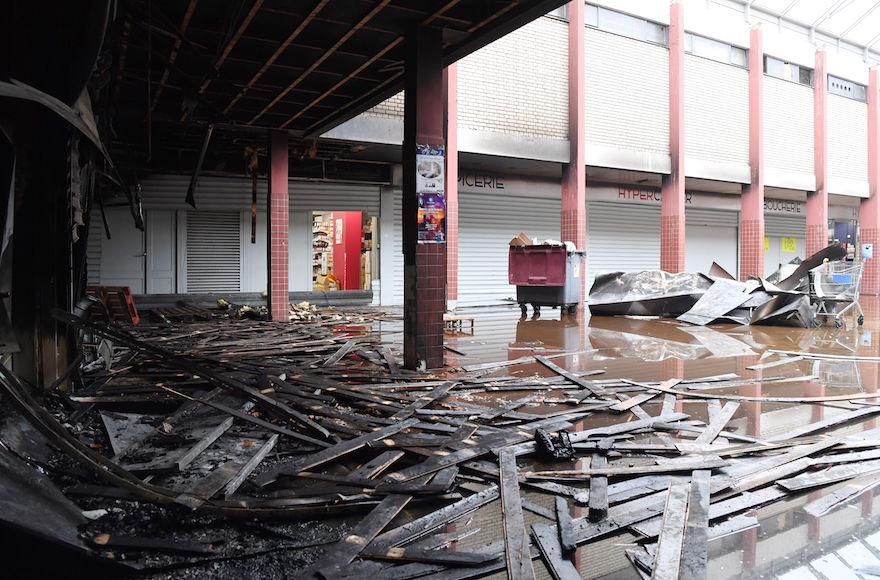 The remains of a kosher grocery store in Creteil, south of Paris, after it was destroyed in what was likely an arson attack, Jan. 9, 2018. (Alain Jocard/AFP/Getty Images)
Advertisement

(JTA) — Two kosher shops were damaged in a fire near Paris on the third anniversary of the slaying of four Jews at a different kosher supermarket in that city.

The fire Monday night at the Promo Stock store in suburban Creteil and at the local branch of the Hyper Cacher kosher supermarket chain store comes two weeks after swastikas were painted on both stores.

No one was hurt in the fire, which caused severe damage to the stores. Police did not say whether the fire was the result of arson, according to Le Parisien, although the Associated Press cited the regional prosecutor’s office saying they were treating the fire as a criminal act because the store’s protective shutters had been forced open.

On Jan. 9, 2015, an Islamist killed four Jews in the Porte de Vincennes branch of Hyper Cacher market in eastern Paris.

CRIF, the umbrella group of French Jewish communities, is organizing a commemoration service on Tuesday in front of that supermarket.

Two days before the Hyper Cacher attack, Islamists killed 12 people at the offices of the Charlie Hebdo magazine, whose editors and artists frequently publish caricatures mocking Islam and other faiths.