In Japan, I discovered the unsung Dutch hero behind Sugihara’s rescue of Jews 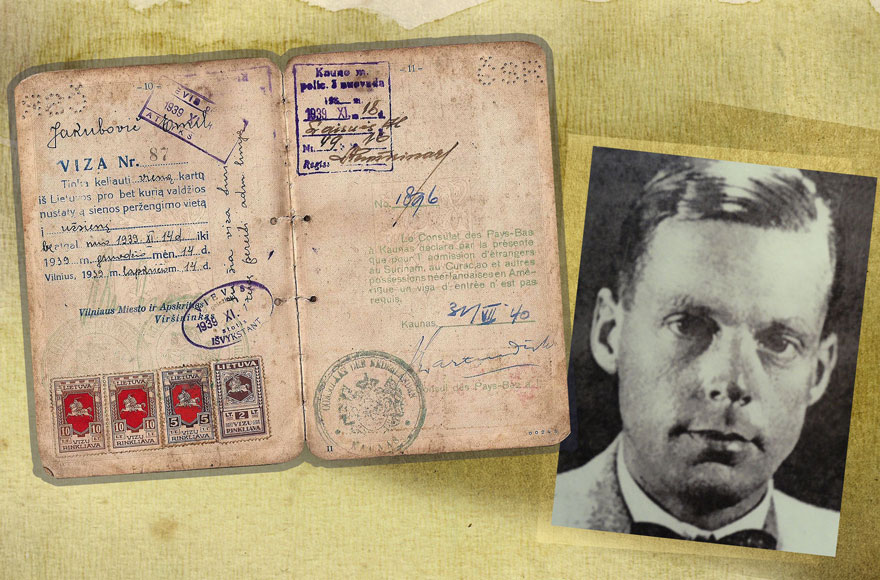 YAOTSU, Japan (JTA) — Like other journalists and researchers, I traveled all the way to this rural area to gain a better understanding of the actions of Chiune Sugihara, one of the most extraordinary rescuers of Jews during the Holocaust.

But unlike most foreign journalists, my October visit to the museum dedicated to this Japanese diplomat — he issued over 2,000 transit visas to Jewish refugees trapped in Kaunas, Lithania — led me to focus on an overlooked and arguably more dramatic element of the Sugihara story. Ironically, that story was waiting for me all along back in my home country of the Netherlands.

At a museum in what many believe to be his Japanese hometown, Sugihara, who died in 1986, is celebrated as a hero for defying orders from Tokyo and, while posted to Kaunas (Kovno) in 1940, helping Jews flee the Nazis and travel through Russia on to China, Japan and beyond.

A rare embodiment of benevolence in a pro-Nazi government that was complicit in some of the worst war crimes in human history, Sugihara is also among the very few to receive the State of Israel’s honor of Righteous among the Nations even though he did not risk his life to save Jews during the Holocaust.

Ending decades of relative obscurity and ambivalence in Japan toward Sugihara — his reputation may have suffered in the country’s hierarchical society over his disobedience — his story of rescue in recent years has become one of the best-known accounts of its kind. Visitors and journalist come by the thousands to the museum, a standard-looking institution erected in 2000 by the government in the village of Yaotsu in the Gifu District. (The area’s other claim to fame is its exquisite sake, a traditional alcoholic beverage made of rice).

The museum is housed in a large wooden building with an adjacent peace monument featuring a fountain and a shrine. The complex crowns a hill overlooking a lush green valley that at sunset echoes with the calls of the red-breasted Japanese sparrowhawk.

At the very end of my tour of the exhibit, I noticed a poster about other life-saving diplomats. It mentioned, in exactly 50 words, a Dutch businessman and diplomat named Jan Zwartendijk.

Zwartendijk served in Kaunas as consul at the same time that Sugihara was there to represent Imperial Japan. Largely eclipsed by his Japanese counterpart, Zwartendijk was the initiator and chief facilitator of the rescue associated with Sugihara. And unlike Sugihara, Zwartendijk risked his own life, as well as those of his wife and their three small children.

According to the enigmatic text on the poster, Zwartendijk gave “Jewish refugees quasi-visas,” which together with the ones issued by Sugihara allowed them to escape.

Feeling more confused than educated, I called Efraim Zuroff, a Holocaust historian affiliated with the Simon Wiesenthal Center who wrote about Sugihara in his doctoral thesis.

“Listen to me,” Zuroff told me in his Brooklyn accent, “there would’ve been be no Jewish refugees in Japan if it weren’t for Jan Zwartendijk. He started the whole thing. Without him, Sugihara could never have given visas. Zwartendijk deserves a lot more credit than he got. His role was absolutely crucial, every bit as that of Sugihara, who is far better known.”

Before Sugihara gave them transit visas, Zwartendijk gave the same Jewish refugees destination visas to Curacao, then a Caribbean island colony of the Netherlands. 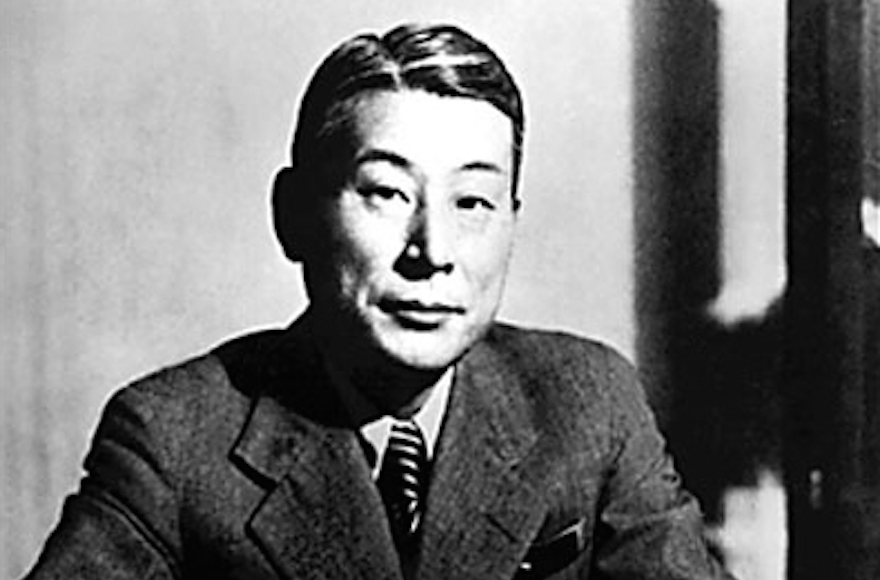 The flight of Jews from Lithuania to Japan began in October 1940, after the Red Army and Adolf Hitler’s Nazi Germany carved up Poland and the Baltic states. Thousands of Jewish refugees crossed over to Lithuania in the wake of the Nazi and Soviet occupations of Poland.

At least one of them, Peppy Sternheim Lewin, was a Dutch citizen. So she reached out to the Dutch ambassador in Latvia, L.P.J. de Dekker, asking if she could get a visa with her Polish husband to the colonies. De Dekker told her that Curacao was a visa-free destination with admittance at the discretion of the governor. So Lewin — her granddaughter described her as having “chutzpah” in a 2016 op-ed for JTA — asked de Dekker to write this in her travel document but to omit the part about the governor’s discretion, which de Dekker did.

This gave the first of the people known as the Sugihara refugees their first destination visa. When word got out, Zwartendijk, who was de Dekker’s friend and appointee in Kaunas, gave the same visa to some 2,300 people stuck in Kaunas without consulting any of his superiors.

But to head eastward, the refugees still needed to go through the Soviet Union, which would not admit them on the basis of the Dutch destination visa alone. Which is where Sugihara comes into the picture, according to Zuroff. Consulates were packing up following the Russian invasion, Zuroff explained.

“So all the people with Curacao destination visas, they start showing up at the office of Sugihara, who introduced himself by his nickname, Sempo,” Zuroff said.

Decades later, the nickname would complicate efforts to locate Sugihara by people he helped save, the director of Yaotsu’s Chiune Sugihara Memorial Hall, Daisaku Kunieda, told me.

“When they approached the Japanese Foreign Ministry, Tokyo had no idea who Sempo was,” Kunieda said.

Many people in Japan and beyond believe the Japanese authorities were not interested in advertising Sugihara’s disobedience and that he was even dismissed from the Foreign Service in 1947 for it. But whereas Sugihara was certainly not celebrated at first for his actions, talk that he was  disciplined is exaggerated, according to Hanit Livermore, an Israeli ex-employee of the museum who moved to the Gifu District to work there.

“It was a time of a major reshuffle in the Foreign Ministry and many other diplomats were laid off,” said Livermore, 48, who moved to Japan with her Israeli husband about 20 years ago. Plus, Sugihara was given a second and third posting after word got out about the refugees he helped save.

Back in the Netherlands, the Dutch government also did little to celebrate the actions of Zwartendijk, according to his youngest son, Rob.

“My father wasn’t a real diplomat, he was someone from the outside who basically abused his diplomatic powers, and that’s apparently not something the Dutch Foreign Ministry is or has not been very keen on celebrating,” he told me in a café near Amsterdam. 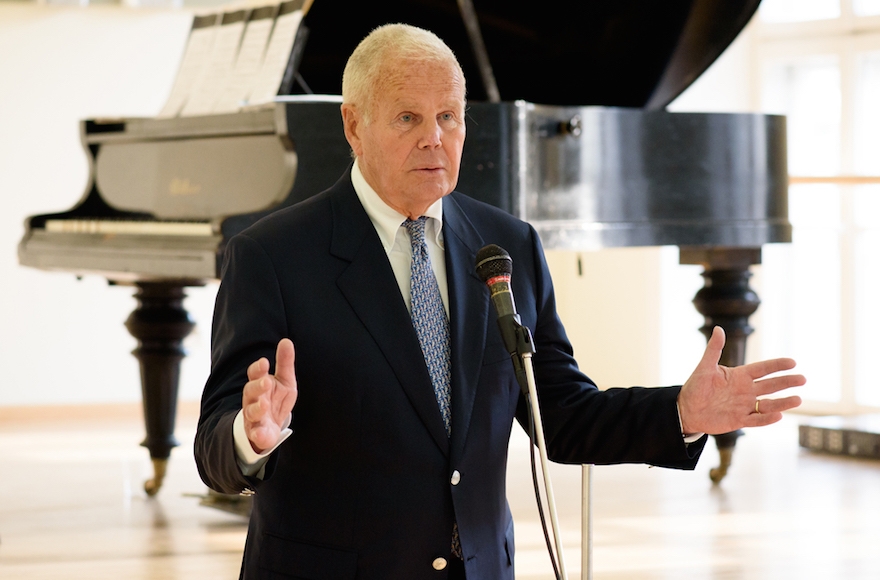 Rob Zwartendijk speaking at a ceremony in honor of his father, Jan, in Vilnius, Lithuania, April 29, 2016. (Courtesy of the Jewish Community of Lithuania/LZB)

Were Zwartendijk and Sugihara working together in Kaunas?

“Not really, they were working independently, but of course they knew of one another’s actions in a small city like Kaunas,” Rob Zwartendijk told me. In their one direct exchange, Sugihara phoned the elder Zwartendijk to ask that he slow down the rate at which he was handing out destination visas. The reason: Zwartendijk had a stamp, whereas Sugihara had to write each visa by hand.

Witnesses say Sugihara was still writing transit visas inside the train after he was ordered by Tokyo to leave Kaunas.

Shortly after the Jewish refugees and Sugihara left Kaunas, so did Zwartendijk, who returned with his wife and three children to the Nazi-occupied Netherlands to continue working for Philips, an electronics and appliances manufacturer. Until the Netherlands was liberated in 1945, the destination visas he gave out were a dangerous secret that, if made known, could have sealed the fate of Zwartendijk’s entire family, his son said.

“In the first few years it was a matter of security that could meant a ticket to a concentration camp and death,” said Rob Zwartendijk, a 78-year-old retired business executive.

Rob Zwartendijk said his father declined to talk about what he had done for decades thereafter.

“The first time I heard about it was from my older brother, when I was 35 — two years before my father’s passing in 1976,” he said.

In the Netherlands and Lithuania, several institutions and media have devoted growing attention in recent years to Zwartendijk’s crucial role in the rescue of the so-called Sugihara Jews. In 2016, the NTR broadcaster produced a four-part radio show about him titled “The Angel of Lithuania.”

But his work remains underappreciated, according to Rob Zwartendijk.

“My late brother collected quite an archive about my father,” he said, “and we used to try and be a part of exhibitions about Sugihara, but it seems that it always ends up being all about Sugihara, who definitely deserves credit, with a few lines about my father. After a while [that] tends to leave a bad feeling.”

An unabashed supporter of Israel and donor to the Israel-based orphanage Boys Town Jerusalem, Rob Zwartendijk said that despite difficult circumstances the Jewish state, which he has visited and met many of the people his father rescued, “by and large lives up to the moral standard set” by his father.

“I have tried to live up to that standard my entire life, in business, as a parent, as a neighbor: Thinking before each action whether this is something he would have done,” Rob Zwartendijk said of his father. “I’ve done my best to pass it on to my children.”

Jan Zwartendijk died more than two decades before Israel recognized him as a Righteous Among the Nations based on testimonies submitted about him by people he helped save. And while Rob wishes he had more time with his father — a determined man of action who nonetheless always remained attentive to the needs of those around him — he does not regret too much that his father did not live to see his heroism honored.

“He would have disliked the attention,” Rob Zwartendijk said. “He always dismissed any mention of what he’d done as something anyone in his position would have done. Which, as we sadly know, isn’t true.”