This art studio in Berkeley is combining painting and prayer 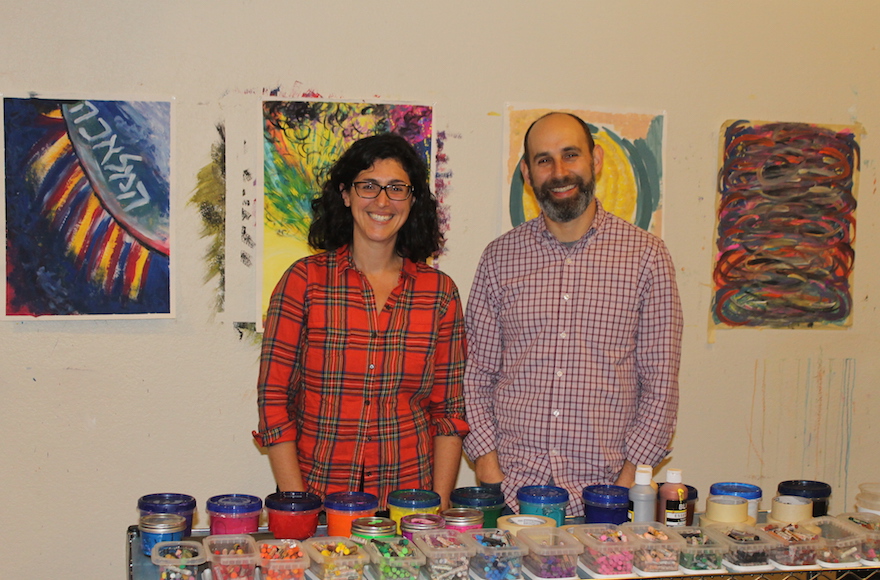 Rabbi Adina Allen and her husband, Jeff Kasowitz, founded the Jewish Studio Project in 2015 as a way for Jews to access their religion through art. (Ben Sales)
Advertisement

BERKELEY, California (JTA) — In the middle of a traditional Friday night service in this artists’ district in the crunchy mecca of Berkeley, California, a group of 40 worshippers paused their prayers to gather around a group of “found objects:” an empty picture frame, fake flowers, a doorknob.

Each attendee then sought out an object that — for whatever reason — they felt called to. They told the group what that object said about the personal journey they were on in life. Then they kept praying.

Around the worshippers was what looked like a mix between a small synagogue and an art classroom. Above a hand drum, rows of pastel drawings hung loosely on string under a bright sign with the words “Works in Process.” A library mixing Jewish texts and books on art and psychology is nearby. Across the room, freestanding shelves offered glue, glitter, pens, scissors and the like.

Some of the worshippers had made the artworks on the wall. Others had come for the prayers, which — like many other informal Jewish prayer groups — mixed folk tunes and Americana-style melodies. But for the Jewish Studio Project, which hosted the service, the goal was to show the worshippers that those things aren’t so different: that prayer can be art, and art can be prayer.

“The first role God had was as creator, and then, later, we learn we were made in the image of this divine thing whose role it is to create,” said Jeff Kasowitz, who co-founded the Jewish Studio Project with his wife, Rabbi Adina Allen. “Our belief and value is that each one of us is inherently creative even if we think we’re not.”

Allen and Kasowitz founded the Jewish Studio Project in 2015 to merge their enthusiasm for traditional Jewish study and ritual with their love for art. The project is hard to define, exactly: It’s an art studio, but it doesn’t teach art techniques. It hosts Jewish prayer and study, but it’s not a minyan or congregation. Its first immersive retreat starts next week, but the participants aren’t all coming from one community or workplace.

Instead, the project hopes to create a new entryway to Jewish spirituality: not just through the prayerbook, the Talmud or a social service mission, but through the process of making art. The couple use a mix of earthy language and new-age phrases — Kasowitz likes the term “spiritual technology” — to describe what they see as an emotional way of accessing Jewish life. They warmly finish each other’s sentences.

“The way we use creative process is a way of seeking new information, new insight and ideas that aren’t readily available at the intellectual surface,” said Allen.

Kasowitz jumps in: The art is “a technology to kind of leave the head and tap into information that we have in our bones.” 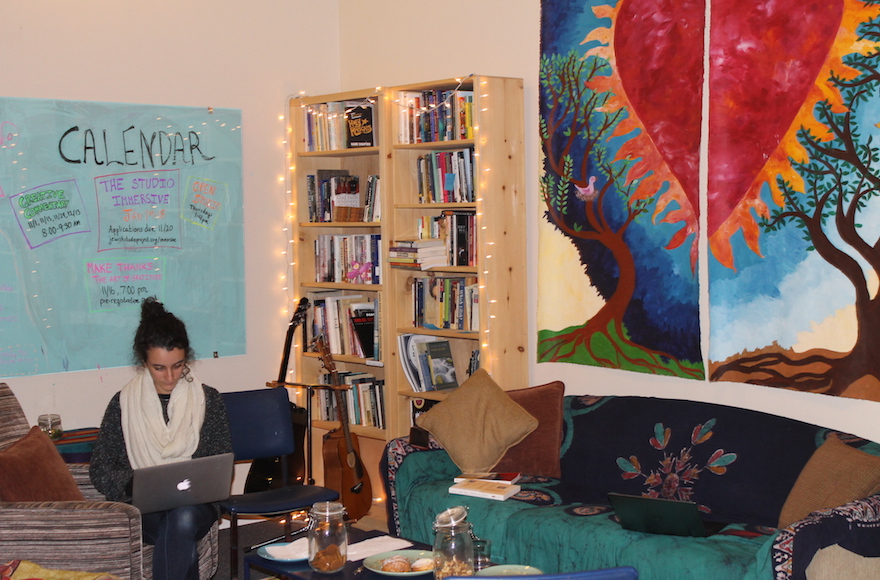 Maya Abramson, the studio manager of the Jewish Studio Project, sits in its art space, called Studio Am. (Ben Sales)

The organization regularly hosts open hours in its space, called Studio Am (the Hebrew word for “people”), where people can come and make art as they wish. But their flagship exercise is called the “Jewish Studio Process,” an art, writing and study program Allen and Kasowitz have run for groups in their studio and across the country. The process begins with traditional Jewish “hevruta” learning, where people pair off to delve into Jewish texts on a certain theme.

The group then focuses on a certain word or phrase they studied — what they call an “intention” — and each person makes art based on it for an hour. The goal is not to create a finished product but to engage in the act of accessing an idea by making art. To that end, participants are told not to comment on each other’s work, and to “follow pleasure” — to do something that makes them feel fulfilled. They finish the process by describing their art through free-association writing.

“We’re not so much about art as we are about activating creativity,” Kasowitz said. “We’re not teachers of art technique. We’re facilitators of spiritual process and creativity activation. We believe deeply that when our creativity is activated, really good things happen in the world.”

Both Allen and Kasowitz came to found the project in part due to dissatisfaction with traditional Jewish institutions. Allen loved her Jewish summer camp as a kid but didn’t find the same kind of meaning in synagogue. She was ordained in 2014 at Hebrew College, a non-denominational seminary near Boston. Kasowitz, who comes from a career in the nonprofit world, grew up in a traditional Conservative home, and met Allen as he was branching out into Renewal and other alternative Jewish movements.

But as much as the couple is creating a new entry point for people to connect with Judaism, they also want to encourage more Jews to connect with art — something Allen says makes people feel intimidated. So far, 4,000 participants have taken part in its programs, which they have also brought to mainstream Jewish organizations like Hillel and Hebrew Union College, the Reform seminary.

“So many people come to our work who I don’t think would normally do creative things, and they’re drawn in by the Judaism,” she said. “We always talk about, ‘Raise your hand if you were traumatized by your fourth grade art teacher who told you you’d never be an artist,’ and it’s, like, always half the group.”

The mainstream movements have caught on to a degree to art as a gateway to Jewish involvement. Versions of an “Artists’ Beit Midrash” — projects combing art and Jewish learning — have been held at Manhattan’s Temple Emanu-El Skirball Center, Chicago’s North Shore Synagogue Beth El and at the Jewish Community Center in Milwaukee.

The Jewish Studio Project is also, in many ways, another of the many independent, progressive Jewish communities that have sprung up across the country in the past couple decades. It hosts High Holiday services with eclectic melodies and a mix of traditional liturgy and contemporary readings. It hosts occasional Shabbat services. It has classes on the weekly Torah portion and programs in advance of major Jewish holidays that combine art and study.

But Carle Brinkman, a friend of Allen and Kasowitz who regularly attends Jewish Studio Project programs, says that even though the organization deals with the same themes as other Jewish groups, it’s getting at them in a way that feels new.

“Engagement in Jewish text, ritual and tradition in this nonverbal way helps me access ideas and feelings and concepts — internal wisdom that the art making can tap into,” she said.

When groups work with paint in the studio, she says, it feels like praying: “We ask for what we want, need, need to discuss, and then we need to let it go and see what gifts come back.”