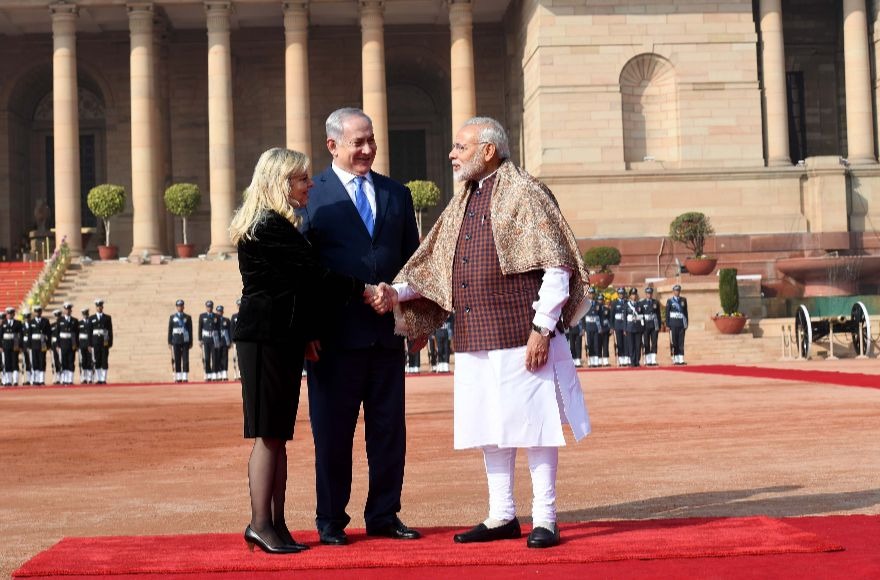 The nine agreements signed on Monday in New Delhi include beginning work on a free trade pact as well as an initial approval for Indian energy companies to explore for oil and gas in the eastern Mediterranean Sea.

Netanyahu accompanied by his wife, Sara, arrived in India on Sunday, the first visit to the country by an Israeli prime minister in 15 years.

Netanyahu was welcomed on Monday morning by Modi at the presidential palace in an official ceremony that included an honor guard of more than 100 soldiers, and a mounted escort for Netanyahu’s vehicle.

“This is the dawn of a new era in the great friendship between India and Israel that began with Prime Minister Modi’s historic visit to Israel, which created tremendous enthusiasm. It continues with my visit here, which I must say is deeply moving for my wife and me, and for the entire people of Israel. And I think it heralds a flourishing of our partnership to bring prosperity and peace and progress for both our people,” Netanyahu said at the palace.

On Sunday, when Netanyahu arrived, Modi broke with Indian protocol and unexpectedly met his Israeli counterpart at the airport. Netanyahu had met Modi at the airport when he visited Israel in July. Modi also hosted the Netanyahus at his residence for dinner on Sunday night.

“My friend last night you again showed us your tremendous hospitality and when you hosted Sara and me at your home so graciously it was brilliantly lit, illuminated by the national colors of India and Israel and I thought at that moment about your honesty, your passion, you vision, your commitment and it fills me with hope, hope that this new era of India-Israel relations will bring unprecedented benefits to India, to Israel, to all humanity,” Netanyahu said. He offered to attend a yoga class with Modi, saying “it’s a big stretch but I’ll be there.”

During Modi’s visit in July, he and Netanyahu sparked an internet firestorm with photos of them walking barefoot in the Mediterranean Sea near Haifa.

Netanyahu is scheduled to visit the Mumbai Chabad House, the site of a 2008 terror attack in which the Chabad emissaries Rabbi Gavriel and Rivka Holtzberg, and four Jewish visitors were killed. He will be accompanied by Moshe Holtzberg, 11, who was three years old at the time of the attack and rescued by his Indian nanny. Moshe, who lives in Israel with his grandparents, is part of the Israeli delegation accompanying Netanyahu in Israel.

Netanyahu will meet with Jewish leaders during his visit to the Chabad House.

It is “our extreme pleasure and honor to welcome you to India. We don’t need to explain what the State of Israel means to every Jew and you as it’s [sic] prime minister visiting Mumbai for the very first time is historic,” the letter said, according to the Post.

“Our Indian Prime Minister Mr. Narendra Modi addressed a gathering of approximately 8000 Indians in Tel Aviv during his visit in July 2017 in Israel. Can you not, Mr. Prime Minister address your 300-400 Jewish brothers and sisters for just 15 minutes? It will mean so much to them and make them so happy,” the letter also said.