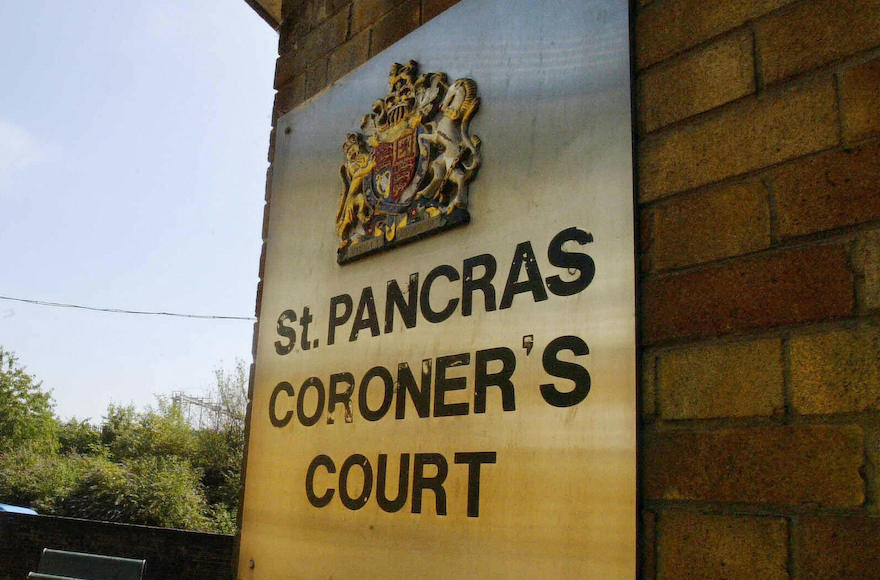 The society’s lawyers said the coroner’s policy “amounts to a blanket and disproportionate refusal” to respect religious beliefs that require a speedy burial.

Mary Hassell, the senior coroner at the St. Pancras coroner’s office in central London, told Jewish leaders in a letter that “no death will be prioritized in any way over any other because of the religion of the deceased or family.”

She also said she would no longer allow Jewish bodies to be held at a local Jewish funeral home instead of the mortuary. Jewish customs require shemirah, in which bodies are attended round the clock by fellow Jews until their burials.

She also has suggested members of her staff have been “bullied or intimidated” by Jewish community representatives calling to try to expedite burials.

The Adath Yisroel Burial Society, based in the London neighborhood of Stamford Hill, which has a large population of haredi Orthodox Jews, told the London-based newspaper The Guardian that it will demand a judicial review this month unless the coroner retracts her new protocol.

The society made the threat after several instances in which families had to wait long periods of time or make up to 200 calls to get a body released for burial.

According to both Jewish and Islamic law, bodies of the deceased must be buried as soon as possible after death, ideally on the same day.

The London-based Jewish Chronicle reported last month that one woman made 210 phone calls to the St. Pancras coroner’s office before being assured that her father would be buried four days after his death. Another family was told it would have to wait two weeks for an autopsy to be performed before a funeral could be held.

Marie Van Der Zyl, a vice president of the Board of Deputies of British Jews and Sidney Sinitsky of the Adath Yisroel Burial Society are scheduled to meet on Friday with Hassell to discuss the issue, the Jewish Chronicle reported on Tuesday.

“As Jews, we are not asking for priority. We are putting a position forward that anybody who requires a swift burial be given the same treatment,” Van Der Zyl told the Jewish Chronicle.

She said the meeting would be “a case where the Board is going to be advocating for the whole community. It’s not just an Orthodox issue, it’s a Jewish issue. We’ve had meetings at the Board of Deputies with haredim, and I have also consulted both Liberal and Reform denominations.”

In 2015, Hassell lost a judicial review brought by the family of an Orthodox Jewish woman. Hassell’s office insisted that the woman have an invasive autopsy, which is against Orthodox law. Last year Hassell was formally reprimanded by the Judicial Conduct Investigations Office for publicizing a letter in which she alleged that she was being bullied by the Jewish community.