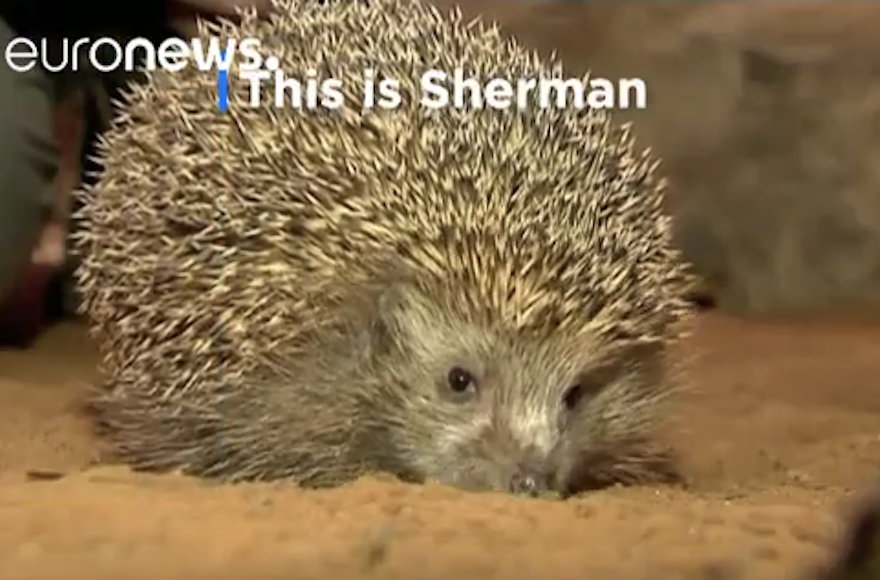 Sherman is among a group of 10 Israeli hedgehogs that had to go on a diet after overeating. (Screenshot from euronews via YouTube)
Advertisement

JERUSALEM (JTA) — Sherman the overweight hedgehog, who was put on a diet at a zoo in Israel, has lost about one-tenth of his body weight.

Sherman weighed 3.5 pounds, double the average weight of a normal hedgehog, when he was taken in by the Ramat Gan Safari outside of Tel Aviv in November. The Safari announced Wednesday that Sherman has lost 0.33 pounds.

Sherman is one of 10 hedgehogs that were found waddling through the streets in Israel. They had eaten so much, mostly cat food left on the streets for strays by softhearted Israelis, that they had problems curling into balls to defend themselves against predators.

All of the hedgehogs were put on food and exercise regimens, with plans to get them trim enough to release by the summer.

They were fed cat food, but in smaller doses, and their diets were supplemented with fruits and vegetables, The Jerusalem Post reported Wednesday.  And the food was placed far from the animals, forcing them to walk to their meals.