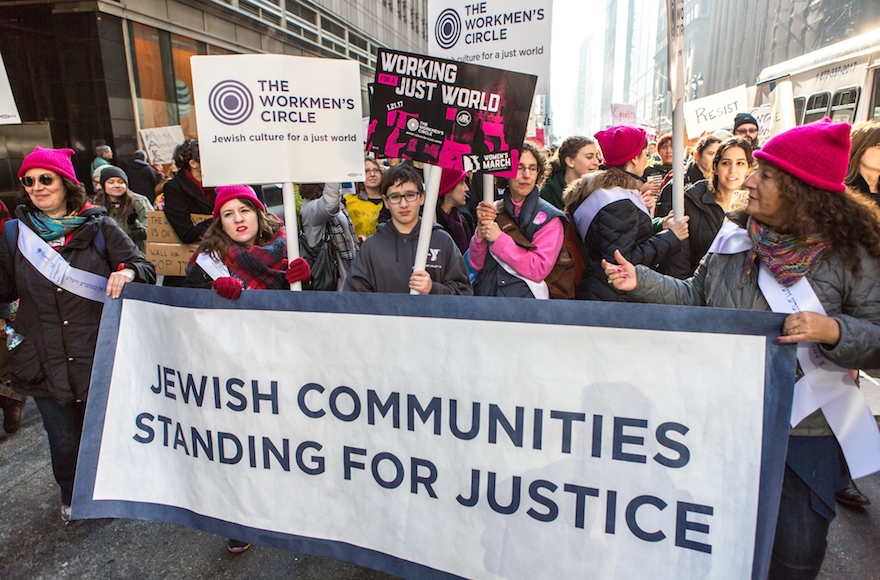 NEW YORK (JTA) — A year since the Women’s March broke records for the largest single-day protest in U.S. history, marchers are again taking to the streets to fight for women’s rights and progressive causes.

The march, which last year took place in cities around the world the day after President Donald Trump’s inauguration, will take place Saturday. Organizers decided to hold the main event in Nevada, a battleground state for the U.S. Senate elections in November.

Jewish groups will be participating in marches across the country. The National Council of Jewish Women expects tens of thousands of its members will attend events, CEO Nancy Kaufman told JTA.

In New York, NCJW, together with Workmen’s Circle, the left-wing culture and social justice group, and B’nai Jeshurun, a liberal nondenominational synagogue, are organizing a Jewish contingent. The contingent, which includes 20 other Jewish groups in addition to area synagogues, will meet on the Upper West Side and walk together to the march led by a klezmer band. At the march, Kaufman and Ann Toback, executive director of the Workmen’s Circle, will both address the general crowd.

“We think it’s very, very important that we stand up as Jewish women to speak truth to power, and to say were not going to sit by and tolerate a complete assault on everything we’ve fought for for so many years,” Kaufman said.

Toback, who will speak on immigration and refugees in her speech, said it was important for Jewish groups to come together at the march.

“I’m honored and it’s an unbelievable opportunity to share our historic message of hope and activism, and really connect our Jewish tradition of activism, in particular the rallying cry we’ve had for decades now, ‘Never again,’ and to really apply it across the board to all of the different cultures that are now under attack,” Toback said.

NCJW chapters across the country will be sending delegations to their local marches. Although there were complaints when the march was scheduled on Saturday, the Jewish Sabbath, chapters are making accommodations: In Chicago, the organization is holding a Shabbat service in the city’s Millenium Park prior to walking to the march.

“For the organization, I think it was a really powerful way for us to stand together with women, and not just Jewish women, but all women and all people and really stand up for progressive values and social justice,” said Melissa Prober, executive director of NCJW Chicago North Shore. 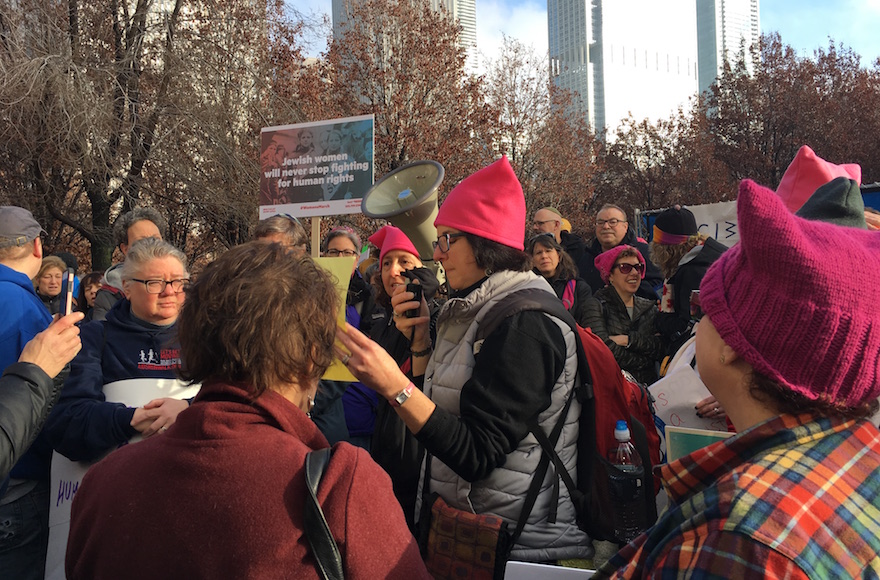 Some 200 people participated in the National Coalition of Jewish Women’s delegation to the Chicago Women’s March, Jan. 21, 2017. (Melissa Prober)

“Zioness is inspiring and empowering our country’s next generation of progressive leaders to wear their Zionist identities proudly, as they fight for human rights and women’s rights, health care, education, compassionate immigration reform, equal pay and equal dignity,” Lewis said in a statement. “These are voices we need in our public dialogue, and in public service.”

The decision to participate in the march wasn’t clear cut for everyone. All the Jewish groups interviewed said they took into account the controversy surrounding the political views of one of the march organizers, Palestinian-American activist Linda Sarsour, in deciding whether and how to participate. Sarsour has spoken critically of Israel, and in one interview seemed to say that Zionism and feminism were incompatible.

Last year, NCJW waited to endorse the march until it had spoken directly with Sarsour to make sure the event would not turn into an opportunity for “Israel bashing,” Kaufman said.

“With that assurance, which was kept, we participated,” she said.

Kaufman said it was important for NCJW to come together with others on shared issues.

“Do we agree with Linda Sarsour and some of the things she’s said about Israel? Absolutely not, and we’ve been clear about that,” Kaufman said. “But we do not believe that we should be politicizing something where there is agreement.

Toback said the Workmen’s Circle would not participate in an event where any members did not feel welcome, but that this was not the case for the Women’s March.

“Absolutely tomorrow, the Jewish community is welcome and everyone is going to feel included,” she said.

There was also another consideration for the Jewish Women’s Foundation of New York, which in 2017 sponsored the D.C. march but not the New York one, where protesters walked past Trump Tower.

“A year ago we felt that was more of a political statement than an empowering statement,” said its executive director, Jamie Allen Black.

However, this year the group decided to sponsor the New York march and will march with other Jewish groups.

“Just a year later, we’re both more aware of what’s happening in the world, and we are less sensitive about being perceived as standing up against some of this administration’s policies that directly hurt women and girls,” Black said.

Prober, who is expecting approximately 200 people from NCJW to attend the Chicago event, hopes the march will motivate people to keep fighting for important causes — which, according to the Chicago march’s website, include “reproductive justice, LGBTQ+ rights, immigrant rights, affordable child care, racial justice, access for persons with disabilities, environmental protection, voting rights, and active citizenship.”

“I just hope that it’s another chance for people to get reinvigorated and inspired to keep working for social justice,” she said.